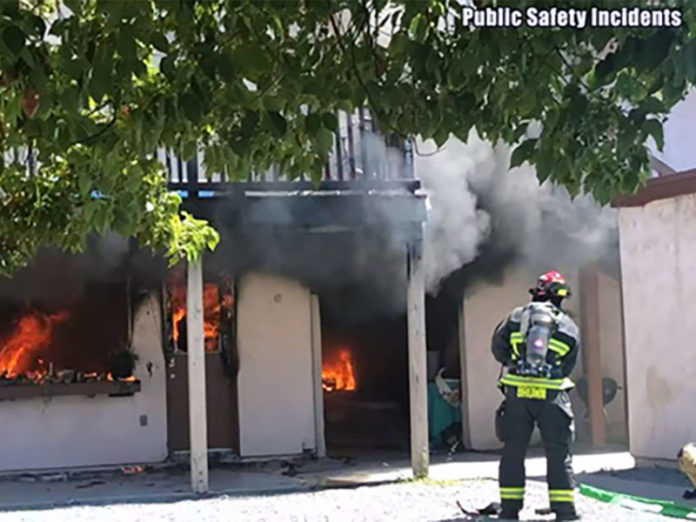 Authorities say ten children and five adults were displaced after a blaze tore through a Hemet apartment complex earlier today, Sunday, Sept.1. Although several animals were rescued from the intense fire, at least two cats are reportedly still missing and have not been located.

The only reported injury from the destructive blaze, which erupted at a complex on the 800 block of Douglas Ct., between Johnston and W. Whittier avenues, was a firefighter who had reportedly been training just prior to the call. He was transported to Hemet Valley Hospital for treatment of heat exhaustion, according to officials at the scene.

Today’s destructive blaze was the second apartment complex fire to hit the San Jacinto valley this week, after a San Jacinto fire destroyed another complex, displacing 10 residents and their pets last Thursday, Aug. 28.

City of Hemet firefighters and police officers were dispatched to the blaze around 12:30 p.m., after receiving multiple reports of a large and growing fire at the apartment complex.

When officials arrived they reported finding a two-story complex fully engulfed in flames, with thick, black smoke billowing high into the air. Firefighters also reported that the blaze had begun to spread to nearby palm trees and other vegetation and that the fire was threatening other structures.

Based on the severity of the fire and immediate threat to other nearby apartment complexes and residents, officials at the scene requested additional support; at which time all five of the City’s engine companies, along with Cal Fire and Soboba Fire department were dispatched to the scene to assist.

In total, nearly 40 firefighters from five City and three County engine companies, along with a truck company, a paramedic squad, a Breathing Support Unit and multiple battalion commanders and fire chiefs, responded to the blaze.

After confirming all the residents had made it out of their apartments, firefighters began an aggressive attack on the blaze.

As firefighters battled the blaze from the ground, from on the roof, and from high atop the ladder truck, the fire began to rip through the complex roof, at which time firefighters had to evacuate from atop the building.

Although all the occupants were able to safely get out their apartments, two cats and two dogs were initially reported missing. The two dogs were eventually rescued from the burning building; however, as of this report, the two cats were still missing and unaccounted for. The two rescued dogs were assessed by AMR for injuries and later returned to their grateful owners.

Firefighters eventually brought the blaze under control, but the complex and all the resident’s belongings were destroyed by the fire and considered a total loss.

American Red Cross officials were summoned to the scene to assist the displaced families and a bus was brought to the location to ferry the families to a temporary shelter.

Based on the severity of the blaze and the number of people displaced, Red Cross officials made an immediate, on-scene donation of $3,000 to the affected families, who reportedly lost everything but what they were wearing when they fled in terror from their burning apartments.

Community reporters Gary Rainwater from Facebook’s Hemet Valley Incidents and Robert Carter from Public Safety Incidents later reported they were first to arrive at the scene of the blaze, arriving several minutes before firefighters.

According to witnesses, rather than film the scene of the devastating fire, the two reporters sprung into action. The pair were seen grabbing garden hoses and using them to try to douse the growing flames as they spread from the apartment into the side and back yards of the property and began threatening other nearby apartment complexes.

Once firefighters arrived at the scene, Rainwater and Carter resumed filming and documenting the blaze. Theirs and other photos and videos can be seen here.

As of this report, firefighters remain at the scene of the blaze conducting extensive overhaul and mop-up operations and are continuing to look for hot spots and extinguish other small vegetation fires as they pop up.

It is unknown how the fire started at this time, and the cause of today’s blaze is still under investigation.

Contributed - February 13, 2021
The Milano’s Pizza and Italian Restaurant crew, customers, and community are celebrating 30 years since the beloved local eatery opened its doors in February 1991.