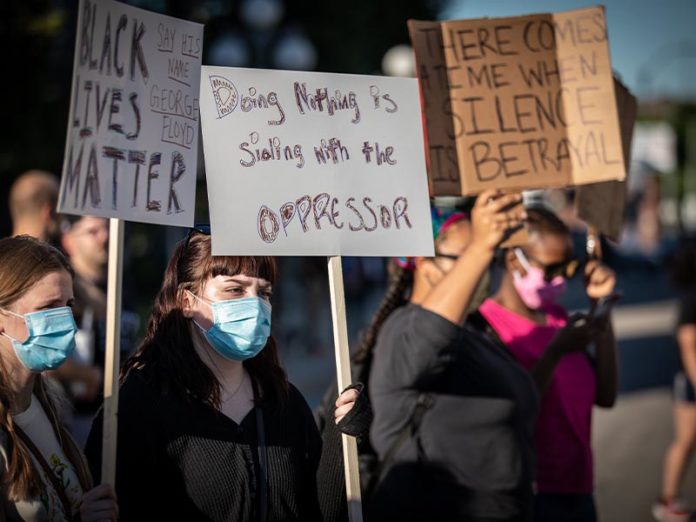 The vitriol of some of Donald Trump’s supporters was put on display in downtown Riverside when Black Lives Matter activists responded to a rally in favor of the president Oct. 18.

At one point, Black Lives Matter activists Junior Vilchiz, Azley Tellez Rivera and Kai King walked over to the pro-Trump demonstration and were met by police who urged them to stay on their side of the street.

The activists continued through the Trump rally as officers stood by. An unidentified man and a pro-Trump demonstrator began pushing each other, but police quickly intervened.

A Viewpoints photographer was shoved by a pro-Trump demonstrator during the altercation.

Trump supporters, who refused to identify themselves, became increasingly hostile toward Viewpoints reporters as the Black Lives Matter activists reached the southern end of the rally.

“Your professors are pieces of s—,” they angrily and repeatedly told Viewpoints reporters. “You guys are indoctrinated. Got enough photos for your lying a– newspaper?”

Police presence dwindled as the Black Lives Matter supporters returned to their side of the street.

The two groups met at the intersection of Market and Third streets. A few dozen demonstrators lined each side of Market Street carrying Black Lives Matter, F— Trump and Trump 2020 flags.

“F— Donald Trump,” a song by rapper YG, blasted on the Black Lives Matter side as demonstrators echoed the lyrics.

Vilchiz noted that the Black Lives Matter protest was there to stand for Black and indigenous people.

“All power to the people,” Vilchiz said. “Since 1492, indigenous and Black people have been through so much pain. We’re tired of this corrupt system. We want equal rights for Brown and Black people.”

Vanessa Bramlage, 55, of Riverside, said she helped organize the Trump rally to support police as well as the president.

“They’re under the possibility of being defunded,” she said about law enforcement. “They need our support too. It’s not just about Trump. We want freedom of speech, freedom of religion. We believe all lives matter, including Black lives.”

Bramlage maintained that she does not have a problem with the opinions of Black Lives Matter activists, but that she wishes demonstrators on her side would not be targeted. She alleged they have had water bottles thrown at them by passing vehicles and been approached with weapons at past rallies.

The two groups first met at a demonstration at the intersection of Tyler Street and Magnolia Avenue on Oct. 11. Black Lives Matter activists alleged that, at that rally, Trump supporters yelled racial slurs at them, including the n-word.

Bramlage admitted that some on the Trump side hurled racial slurs that day, although she argued both groups were disruptive.

“Yes, there were racial slurs,” she said. “Last weekend, both sides were out of hand.”

After walking through the Trump rally Oct. 18, King said the president’s supporters were unwilling to engage in productive conversation.

“These people are disillusioned,” he said. “Every time we go over there, we’re greeted by slurs. They need to look in the mirror. When we went to the other side, we were peaceful.”

Rivera, like Bramlage, maintained that everyone is entitled to their opinion, but urged participation in the upcoming election.

“It’s time for unity,” she said. “This election is like none other. We have an opportunity to make life for the next generation better than ours. If Trump wins, God help us.”

Kyle Headlee - June 14, 2019
Between the price of running your air conditioning and having to feed hungry kids all day long, summer “vacation” can actually...

MIKE PERCIFUL RUNS FOR RE-ELECTION TO THE HEMET CITY COUNCIL

Rusty Strait - October 17, 2020
I’ve interviewed Mike before, so I knew a little bit about him. He was always willing to fill me in on things if I called with an issue. Very sociable but not the usual politician with all the answers before you asked a question. This interview took place in his realty offices on East Florida Avenue.