On July 18, Riverside introduced its newest addition to its already long list of nearby boba shops. Krak Boba opened up at 3907 Chicago Ave Suite B, Riverside, CA also known as where Roasting Waters used to be. Being a boba connoisseur myself, I was ecstatic to see what this new boba place offered, so I waited for the perfect time to review the drinks offered at Krak Boba to see just how addicting they are, if at all.

I went on Friday, Oct. 16 with two friends. As soon as I opened the door and walked into Krak Boba for the first time, it seemed like I was transported to a different place. The inside was very well lit and aesthetically pleasing. The walls were covered in color coordinated art work with the boba shop’s signature logo and colors. There was even a wall with a sitting bench which would have made for a perfect photo opportunity if not for COVID-19. There were also tables that were now closed off with cute décor.

After taking in the beauty of the boba shop it was time to order. Their menu consisted of an extensive list of possibilities. Their signature drinks looked aesthetically pleasing and delicious. After a bit of debate, my friends and I settled on three drinks and the Krak Bread, which was listed on their munch menu. The three drinks we got were a Brown Sugar Milk Tea with boba and almond milk for a whopping $6.05, a Tropical Paradise for $5.45 and Sun Bright with lychee for $5.15. The least expensive item ordered was their Krak Bread for $3.99. The total came out to $20.64, which is probably the most I have ever paid at a boba shop. I hoped that the drinks would save me from feeling bad about the price.

Due to COVID-19, my friends and I all took the drinks back home and poured our drinks into small cups to be able to taste them. We began by tasting the Brown Sugar Milk tea, the most expensive drink we had bought. We each tasted the drinks and all gave each other a look. After a few minutes of silence, my friend stated, “It tastes how brown sugar smells,” and he was exactly right. The drink was overly sweet — all you could taste was the sweetness. I could not even taste the boba pearls because it was way too sugary. The only reason our friend, Jacob, finished his drink was because he pointed his straw at the very top and drank it like that. With that method, he was able to avoid the sweetness yet was essentially just drinking almond milk. On a scale of 1 through 10, he gave it a 3 and advised people not to try it, yet he appreciated the fact that Krak Boba offered milk substitutes for their drinks.

The second drink we each tried was Tropical Paradise, a ginger ale drink with assorted fruits and it tasted exactly like that. It was an interesting and unique take on a “boba drink” with the carbonated ginger ale. The assorted fruits included were real orange slices and strawberries. It is a drink that I did not like, mainly because I do not like carbonated drinks, but my two friends really liked it. On a scale of 1 through 10, my roommate gave it a 6.

The last drink we tried was my Sun Bright. When I saw it on the menu, it made me excited to try. Sun Bright is a honey green tea with passion fruit, lemon and orange. The first sip I took left me disillusioned. All I tasted was the lemon and orange and could only find small traces of passionfruit at the very bottom via the seeds left in the drink. It was decent for a green tea yet left me wanting more. Since I had added lychee to my drink, it tasted a little bit better, but not by much. On a scale of 1 through 10, I gave it a 5. I personally did not enjoy this drink and found it to be underwhelming, which seems to be the case for most of the drinks I had tried.

After being left confused and a little sad, we finally reached for the Krak Bread, a garlic cream cheese bread, and probably the least expensive item on their menu not counting toppings. It looked so beautiful and smelled so good. Being a garlic fan myself I found myself drooling over this Krak Bread and for the first time I had the slightest bit of hope that I would finally enjoy something off their menu. After my first bite I was proven wrong. Despite it smelling savory it was overwhelmingly sweet. I knew that it had cream cheese in the description and expected a sweet and savory treat but was dissatisfied that it was just sweet. There was the slightest hint of garlic in the bite I had but everything else was just sweet.

Overall, I did not enjoy my experience at Krak Boba. Their drinks are on the pricier side and is a reason why I will not be coming back. If you have a sweet tooth however this might be the spot for you. Or if you would like a milk tea with milk substitutes to avoid uncomfortable experiences in the bathroom this is the place to go. The Krak Bread was probably the best thing I had tasted from Krak Boba and I did not like it much. For the price I do not find it worth it as I could get cheaper and better boba at different locations. 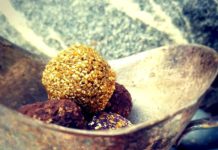 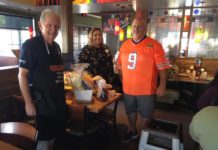 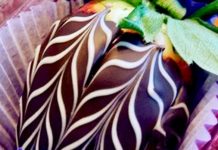 Heavenly sweets fit for a Saint

“Crust” in time for the holidays

Contributed - November 7, 2019
It’s that time of year again! The weather is cooling off, the ovens are turning on and, with Thanksgiving right around the corner

Contributed - December 19, 2019
Christmas is Practically here! Have you done all your shopping? Wrapped all your gifts? Decked the halls? Dressed the tree? Christmas cards?