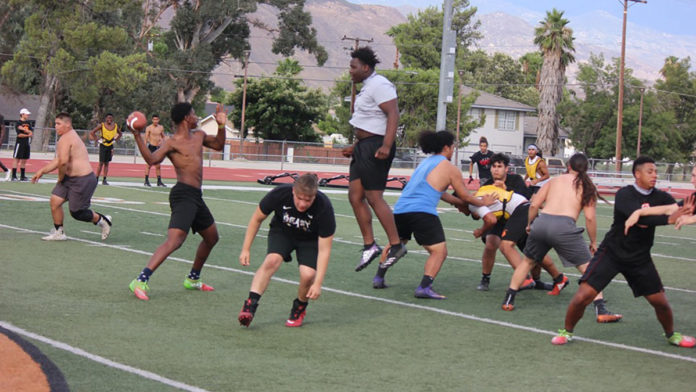 Week three of Hardknocks was nothing less than intense. The physicality was escalated to a whole new level, and the players aren’t even in pads yet. Coach Galliano told his team they have to earn their spot, and this is where they do it. Conditioning is getting better; most of the team is completing drills and runs with gas still left in the tank. From an outside perspective, you can see how the team is starting to gel into a unit together.

The team went into full scrimmage mode, (without pads and tackling) but definitely, there was a “Us Vs. Them” mentality when the offense took the field against the defense. The big defensive tackle Sheldon Newton was coming through the offensive line with power and speed right at quarterback Kajiya Hollowayne (who was recently offered a full-ride athletic scholarship to UCLA) In this drill you aren’t allowed to touch your quarterback, but that didn’t stop Sheldon from engaging in friendly trash talk telling Kajiya, “I woulda smacked you, boy,.” Kajiya responded with a smile and an eye roll as to say, “Yeah, I’m sure about that.” The intensity only picked up from there. One of the wide receivers ran the wrong route resulting in a defensive interception. Kajiya wasn’t happy about that and took control of the scrimmage; he started making reads, getting out of the pocket when under pressure and moved his offense downfield. As good as Kajiya and his offense is, it’s the defense I was impressed with this week. Kajiya was always under pressure, and when his receivers caught the ball, they were instantly swallowed up by three or four defenders.

The team then transitioned to one on one drills, Wide Receivers vs. Defensive Backs. This is where kids who are trying out for the team make names for themselves and get attention from the coaching staff. Two players constantly lined up against each other and went head to head multiple times, the defensive player intercepted two balls and batted down a hand full, but that didn’t stop the wide receiver from getting in his reps. He regularly ran great routes, making strong cuts in and out of his route, and showed excellent hands. Catching balls that were a little high or a little low. The competition between the two of them was great, neither were angry when the other guy won the matchup, they simple smacked hands and ran back to the line to get more reps in.

These week’s practices were intense, but Coach Galliano and his staff are trying to make sure his team is ready for when they get pads on in the coming weeks. That’s when the physicality of the game reaches a new level, and you find out who is cut out for it and who isn’t. Until then, Coach Galliano and his staff are working hard to make sure every player knows the playbook and what they have to do in their position.