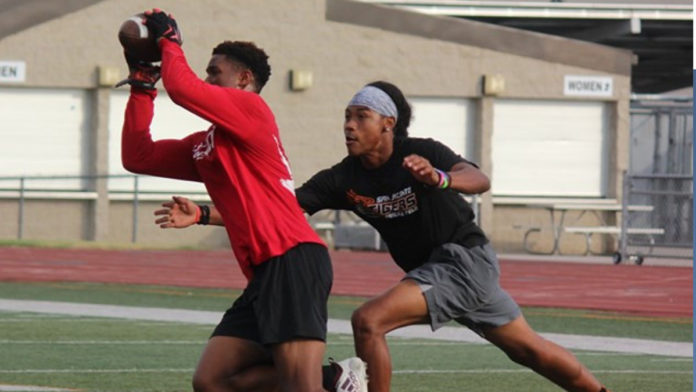 This week’s Player Profile features Damonce Williams. He is a wide receiver and is entering his junior year at San Jacinto. He has been on Varsity since he was a freshman and a key feature in Coach Galliano’s offense. Damonce is a two-sport varsity athlete for the Tigers. He is every threat and possesses the kind of natural breakaway speed that throws many defensive backs off guard. Monce has learned not to show his speed right away; he will jog through routes and accelerate out of the break causing defensive players to hesitate and lose their grip on him. Coach Galliano had this to say about him, “Damonce is a hard worker, good route runner with excellent hands. He is his biggest critic; it makes him push harder to become a great WR.”
Last year Damonce banked in 8 touchdowns, this season he is hoping to have a break out year and get some college attention. Every practice he is putting in the work and is getting better and better.

Damonce’s favorite route to run is a post corner, he likes 50/50 balls and competing for those balls. He has been playing football since he was nine years old. Damonce instantly noticed how when he was playing football, he wasn’t getting in trouble and decided that he would stick with it. That’s his number one thing that he loves about football; it keeps him too busy to mess around.
Damonce finished last year’s school year with a 3.5 GPA; he is hoping to get that even higher this year. His favorite subject is reading, and he enjoys the quiet time he can spend away from the world. When Damonce isn’t playing Football or Basketball, he spends his free time playing video games. He loves to play 2k (NBA basketball video game) and Madden (NFL Football Game). Monce is determined to graduate from college and dreams of going to AU (Arizona University) to major in business. He hopes to launch his own clothing company and successfully start a business empire.

Monce is thankful to Coach G for taking a chance on him during his freshman year and never giving upon him. He feels like Coach G has his back and wants to make him proud. Most of all Monce is excited for this upcoming year, and he feels like the Tigers left too much on the table and wants to get back to the championship round to get the chance to show that they deserve that CIF championship ring.
Follow the Hemet & San Jacinto Chronicle for your weekly Player Profile and Hardknocks updates. If you are looking for more pictures of Hardknocks, please follow Author Kyle Rae Headlee on Facebook.