A growing number of Americans are using cannabis as it becomes legalized for recreational adult use in a rapidly increasing number of U.S. states. Questions abound about what impact legalization will have on adult and youth health.

In a new study at Columbia University Mailman School of Public Health, findings show that increased cigarette use is one possibility. While cigarette use has been declining for decades in the U.S., the study finds that adults who use cannabis daily do not perceive smoking a pack a day as being as harmful as those who do not use cannabis in the U.S. The findings are published in the journal Nicotine & Tobacco Research.

“In the context of recent findings that perception of risk plays a key role in predicting substance use, and that perception of risk associated with cannabis use has declined steadily along with legalization, these findings were somewhat of a surprise,” said Renee D Goodwin, PhD, a professor in the Department of Epidemiology at Columbia Mailman School of Public and professor of Epidemiology at The City University of New York of New York, and lead author.

At a recent Suffolk County Legislature Public Hearing on Introductory Resolution 1417, A Local law to Regulate the Packaging of Cannabis (Marijuana) Products to Dissuade its Appeal to Children, Goodwin discussed her work and, in particular, that of Canadian colleagues. The resolution, proposed by Legislator Kara Hahn, aims to ban cannabis packaging that appeals to children in Suffolk County, New York (NY01). Findings from Canada, which made cannabis legal federally show increases in adult cannabis use but as of the most recent study in 2022, no sustained increases in cannabis use among adolescents. “Data from Canada suggests that plain packaging is one measure that can maximize the safe and effective rollout of cannabis legalization and protect the health, safety and wellbeing of all members of our community, including those most vulnerable: children,” Goodwin said.

“Tobacco control has done a tremendous job in public education on the physical health risks associated with tobacco use, and cigarette smoking in particular, over the past several decades,” noted Goodwin. Her prior work shows that cigarette use, however, is much more common among those who use cannabis and that cannabis legalization may contribute to observed increases in cannabis use and cannabis-cigarette co-use among adults.  “We wondered why that might be. Our findings suggest that diminished risk perception of pack a day cigarette use may be one contributing factor.”

“Enacting legislation on the local and state level that reduces the appeal of cannabis products to youth vis-a-vis prohibiting product packaging that mimics foods and candies that are traditionally marketed to children (e.g., pop-tarts, Oreos) may reduce potential unintended harms to the most vulnerable members of our community via accidental ingestion/poisonings, which have exploded in number in recent years in the U.S., with child and adolescent intentional use of these products,” Goodwin suggests. 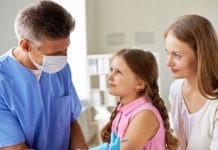 Associated Press - February 9, 2021
The drive to vaccinate Americans against the coronavirus is gaining speed and newly recorded cases have fallen to their lowest level in three months, but authorities worry that raucous Super Bowl celebrations could fuel new outbreaks.