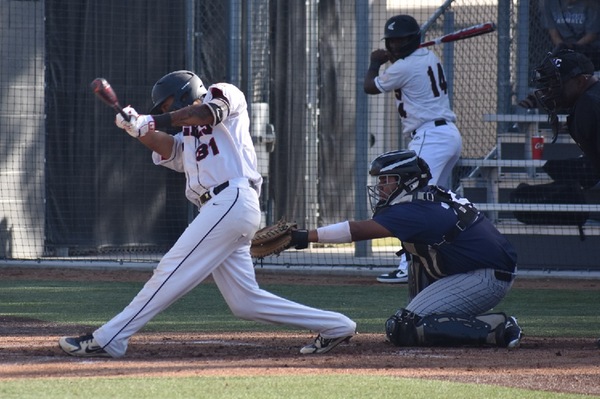 The Eagles gave Banuelos some breathing room early as they scored in each of the first four innings. In the bottom of the first speedy center fielder, Joseph Hauck came all the way around from second on a wild pitch to give MSJC a 1-0 lead. In the bottom of the second, the Eagles extended their lead when Aaron Harper hit a ground-rule double to left field scoring Aiden Bruce. Two batters later Fabian Correa singled to left scoring both Hauk and Harper to push the MSJC lead to 4-0. The Eagles would go on to tack on a single run in the third on an Alfred Lopez single and another in the fourth when Ajay Parcero drove in Harper. The Eagles would add an insurance run in the 8th when Harper picked up his third hit of the day as he tripled to left field scoring Lopez.

Harper’s 3 hits and 2 RBIs led the Eagle offense that pounded out 11 hits on the day. Parcero, Lopez, and catcher Simon Rangel each had two hits in the victory.

Banuelos, who improved to 3-1 on the season with the victory, was sharp throughout the contest for the Eagles. He went 8 complete allowing just 3 hits while walking only one and striking out six. Robert Barrett pitched the 9th to keep the shut out intact for MSJC.

The Eagles improved to 6-10 on the year with the win and moved to 2-1 in IEAC games; they still have one suspended game with San Bernardino Valley to complete. MSJC returns to action on Saturday when they travel to Barstow for a 1 pm contest. Next week the Eagles will finish their pending game with SBVC, before playing the Wolverines in a 3 game series. MSJC will be at San Bernardino on Tuesday the 10th and Saturday the 14th; San Bernardino will visit San Jacinto on Thursday the 12th.

Tigers Fall in the Semi-Finals

Contributed - November 28, 2019
San Jacinto jumped on the bus and headed to Whittier for the Semi-Final match up against La Serna who was ranked in the top 50

League Play Is Here For Basketball

Kyle Headlee - January 9, 2020
League play is here, Let’s take a look at the matchups our Mountain Pass League basketball teams will be playing in this week. Game one of the week is West Valley vs. Tahquitz.