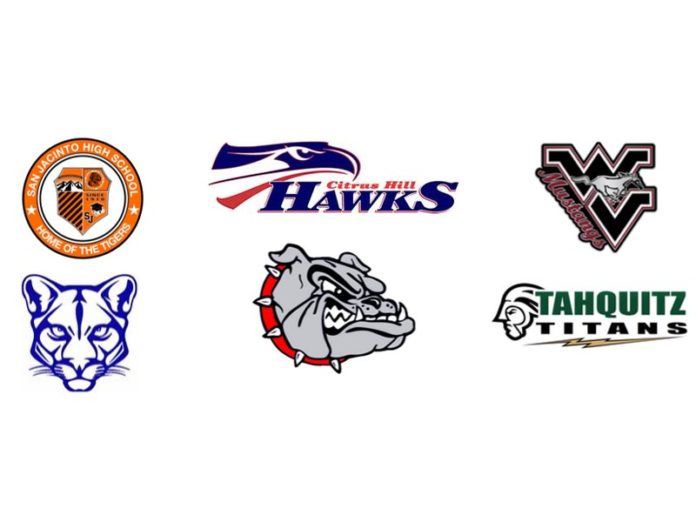 League play begins this week; every game counts if you want a spot in the playoffs. In the first game of the week, San Jacinto High School is traveling up the hill to face Beaumont. San Jacinto is coming off a bye week, and before that, a very impressive win against Temecula Valley were they looked dominant in every phase of the game. San Jacinto is ranked 129 in the state and wants to keep climbing the ranks; their overall schedule is 3-2 right now with losses to Woodrow High School & Eastlake High School. San Jacinto should benefit from such a tough schedule in the first half of the season, which has to be by design. They played schools that are either in higher divisions than them or ranked better so that they can get a feel for stiffer competition. The offense is led by Kajiya Hollawayne, the Junior QB who has over 1,000 passing yards, 8 touchdowns, 527 rushing yards, and 5 rushing touchdowns on the year already. The defense is led by Kameron Rocha who has four interceptions and makes plays all over the field every Friday night.

Beaumont is coming off a huge win against Lakeside. They are currently sitting at the top of the division (tied with Citrus Hills) with a 5-0 record. They are ranked 264th in the state but hope to prove that rankings don’t mean anything in this matchup against San Jacinto. Beaumonts offense is led by Senior QB Edward McCulloch, McCulloch has banked in 580 passing yards, 8 touchdowns, 157 rushing yards, and 7 touchdowns. They play a real team style of defense with all the players getting in on the action.

Citrus Hills is traveling down to Hemet to play the Bulldogs. Citrus Hills is tied with Beaumont for the highest record in the league at 5-0 they are currently ranked 136 in the state and fresh off a victory over Poly (Riverside), Citrus Hills’ team is led by QB Markus Bell. Markus Bell has 486 yards through the air this season and 7 touchdowns. Citrus Hills’ defense is full of ballhawks. They are averaging two interceptions a game and have 10 on the season.

Hemet is coming fresh off a defensive battle against Redlands High. They won that game 17-7 thanks to Junior QB Jeremiah Graves who had over 200 All-Purpose yards and two rushing touchdowns. Hemet High School is ranked 297 in the state and has a 3-2 record. Their team is led by Jeremiah Graves; the Junior QB has 700 passing yards on the season, 7 touchdowns, close to 200 rushing yards, and 3 rushing touchdowns. The defense is led by Junior DB Frankie Castillo who has been locking down receivers all season long and banked in 4 interceptions already. Also Senior Safety Bradley Fye, he has 3 interceptions on the year and is always in the playmaking tackles.

In our Game of the Week West Valley (527, 2-3) is traveling down the road to Tahquitz (625, 3-2) this game is a solid matchup between the two schools that have had a little rivalry growing since 2007 when Tahquitz opened up forcing half of West Valley’s underclassmen to be rezoned. A lot of the players at West Valley felt betrayed by the guys who chose to go to Tahquitz instead, and the Rivalry was born. West Valleys team is led by Senior Running Back Tyrone Jackson Jr. the offense flows through Tyrone; rather they are running misdirections or passing; he is usually only a good block or two away from being a highlight reel. Tahquitz is having a tough year, with rotating staff and an unsure future they are hoping to prove their doubters wrong and show everyone that they are ready to play and compete to be at the top of the division.

Kyle Headlee - December 5, 2019
The Herrera brothers are already beginning to reach a high level of notoriety amongst boxing enthusiasts. They continue to add to their pedigree

San Jacinto’s 3 down back

Kyle Headlee - July 20, 2019
In this week's Player Profile we introduce you to Juan Denny, Juan is a San Diego transplant who moved to San...