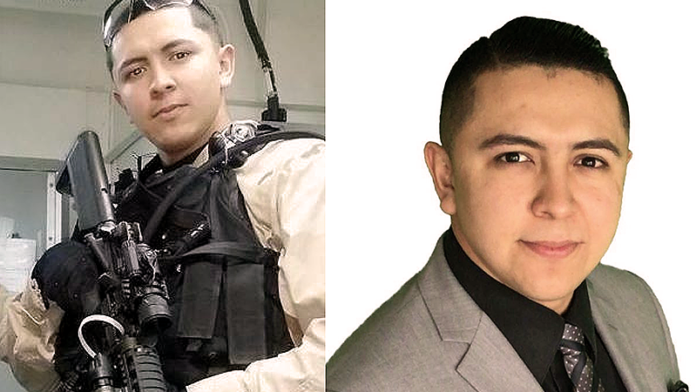 Frank Donley graduated from San Jacinto High School in 2011, almost immediately he enlisted to serve our nation as a member of the Navy. In high school Frank was the starting pitcher on the baseball team, One of his former coaches said, “He was an all-around great player, could catch behind the plate and do anything you asked of him.

Very coachable, great team player, and an amazing leader.” Frank joined the Navy to serve his country and get the opportunity to see the world, While enlisted he earned three Navy Achievement medals and was awarded Junior Sailor of the Year for his ship USS Bainbridge DDG96. Frank served out his enlistment contract and re-enlisted in the Navy Reserves to continue to serve his country. He plans on spending the next 13 years as a reserve, just in case his country needs him.

Frank is engaged to the love of his life Elizabeth Keat, together they have twin boys and they are adding another crew member to their family in August. Frankie Ray, Bryce Jose, and Riley are Frank’s world and he would do anything for them.
Since leaving active duty Frank has become an entrepreneur in his own right and a
licensed real estate agent, He has tagline the phrase “Sail or Sell Homes” which plays on the fact that he is still in the Navy and will always be a Sailor at heart.

Frank can’t wait for his boys to be old enough to play baseball so he can start coaching them and building memories that will last a lifetime. He doesn’t just want to coach his boys, Frank has a heart to become an influencer for the valley and encourage the youth to stay out of the streets, he will do this through coaching of various sports and encouraging kids to have a good work ethic. This is just one of the many ways Frank plans on helping out the youth in Hemet and San Jacinto.

Do you know a graduate of one of the schools in the Valley that is doing great things? Whether it be running a business, charity work, furthering their education, serving their country, or something else and would like to nominate them to be the Alumni Highlight of the week? You can Email me at Vcsportskyle@gmail.com and tell me a little about them. Make sure to include a contact number and a photo of them. I look forward to hearing about all the great people in this valley and sharing them with all of the readers.

Contributed - March 12, 2020
The Hemet/San Jacinto Student of the Month Program honored seven seniors at a breakfast celebration on Feb. 13 at the Sizzler restaurant in Hemet