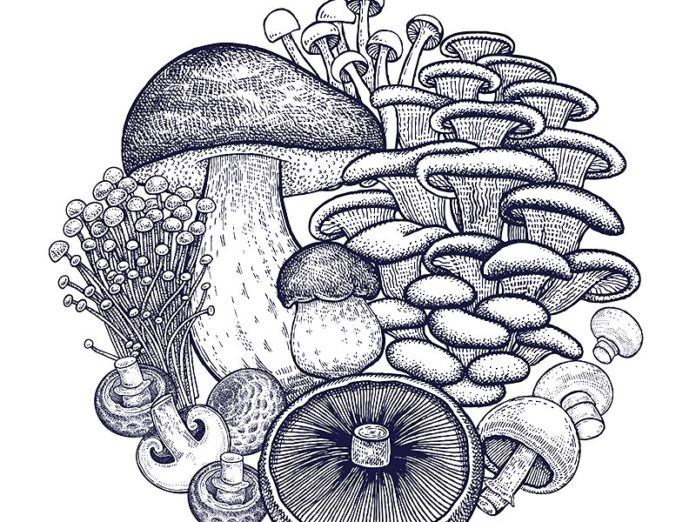 Fall rains give rise to a mysterious kingdom

Mushrooms: from murder to magic to medicine . . . to pizza topping. Your mother may have urged you to stay away from those “Toadstools” but for some, including myself, those pleas of warning led to a mushrooming curiosity for the unknown. And with recent rainfall we can expect these organisms to make their appearance on lawns, in forests, gardens, and pastures; providing the perfect opportunity to pique the minds of the curious, and to explore a largely misunderstood kingdom.

More closely related to animals than to plants, mushrooms are the reproductive structures of underground fungal networks called mycelium. The web-like structure of the mycelium feeds by secreting digestive enzymes, breaking down organic matter, and absorbing nutrients. These fungal “stomachs” can colonize acres of land. In fact, the largest known organism at 2,385 acres is a fungal network of the edible “Honey Mushroom,” residing in Oregon’s Malheur National Forest. Mushrooms are natures recycle bin. Through modes of nutrition they turn dead matter into life-giving soil, and many form essential relationships with the root systems of trees and other plants.

Mushrooms evoke a number of emotions ranging from fear to adoration. Here in the U.S., our culture sways fungophobic – that is, we tend to be a mushroom fearing society, in contrast to European and Asian cultures. We more often associate mushrooms with death and decay; the culprits of poisonings, pests of agriculture, harbingers of bad luck. They’ve been implicated in train derailments, the assassination of an emperor, the invention of Santa Clause, and in their magical form – the psilocybin-producing species — have been speculated in spurring human language via the “Stoned Ape Hypothesis.” But all magic, mysticism and hypotheses aside, the ecological role they play is vital to sustaining life; they are an untapped resource for new medicines, and their digestive powers have been used in cleaning up oil spills and other man-made chemicals. Of the 10,000 described species in North America, most – about 80% – are non-toxic; 18%, if ingested would make you wish you were dead, and about 1% are life-threatening if consumed. The other 1% are hallucinogenic. Always consult an expert if considering any mushroom for a meal, and familiarize yourself first with the deadly species. A great book for beginners, All That the Rain Promises and More by Dave Arora, is an informative and fun guide to western mushrooms.

Unidentified Fungal Object: what’s this thing growing in my yard?

Mushrooms come in an astonishing variety of shapes, textures, colors, growth habits – and reputations, which has led to oddly named species like “Turkey Tail,” “Fairy Ring Mushroom,” “Destroying Angel,” “Corpse Finder,” “Lawyer’s Wig,” and the glow-in-the-dark “Jack O’ Lantern.” They can seem otherworldly in origin, appearing rapidly in troops, rings and lawn-occupying colonies . . . some are even known to bust through asphalt. The task of identification often starts with the anxious, stick-wielding discoverer poking at a specimen, but don’t worry, you cannot die from touching a mushroom and there are numerous books, websites, and online groups dedicated to mushroom identification; a good place to begin is at https://www.mushroomexpert.com/index.html or upload your pics and observations and contribute to the science of mushrooms at https://mushroomobserver.org/

Whatever your fungal opinion, mushrooms and other members of the fungi kingdom are an important but overlooked part of our lives. Beneath our feet lie networks of untapped knowledge and undiscovered species. The field of mycology (the study of fungi) relies heavily on amateur observations in advancing what we know; and with the recent rains, the next time you’re out browse the yard, the garden, or take a walk in the park . . . you never know what you might find.

Search: Fungus Among us

Does Medicaid take better care of Americans and their finances than...

Contributed - September 21, 2021
At the Texas hospital where Dr. Christopher Moriates works, it’s a common story: Patients come in with diabetic ketoacidosis, a life-threatening condition that can be prevented with insulin shots.