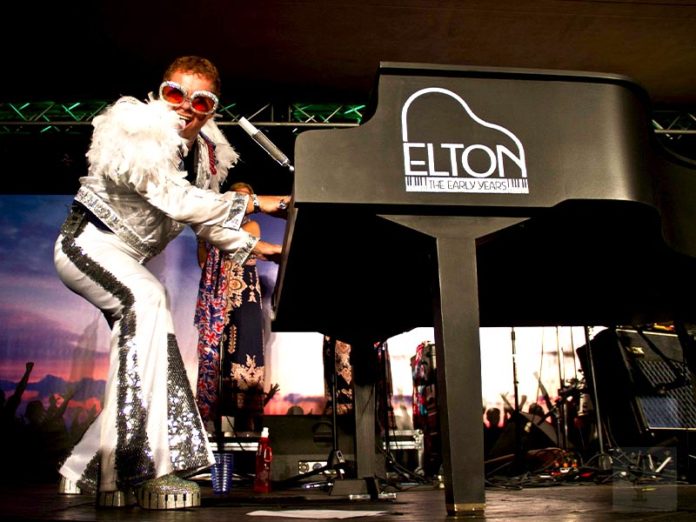 On Saturday January 4th, the Historic Hemet Theatre will begin yet another season of Tribute Mania with a high-energy tribute to Elton John, featuring Kenny Metcalf.

Elton John is a legendary English singer, songwriter, pianist and composer. He has sold more than 300 million records, making him one of the best-selling artists in history. Billboard lists him as the most successful male artist on the Top 100 charts. Elton’s long list of accomplishments includes 5 Grammies, an Oscar, a Tony and a Kennedy Center Award, as well as being knighted by the Queen of England and receiving the Legion d’honneur, France’s highest civilian award.

This show by Kenny Metcalf pays tribute to the early years of Elton John, with all of the glitz and glitter and “over the top” energy. Kenny has performed all over the nation, including an appearance on AXTV’s “The World’s Greatest Tribute Bands.” Sales for this show are moving fast and may be gone before day of show.

The remainder of Season One will feature tributes to The Carpenters by Sally Olson & Ned Mills (January 18), Tina Turner by Debby Holiday (February 1), Marvin Gaye by Jackie’s Boy (February 22), The Bee Gees by Bee Gees Gold (March 7), Tom Petty by Petty and the Heartshakers (March 21), Metallica by Masters of Puppets (April 4) and Abba by Abba Fab (April 18).

Bringing the past to life at The Historic Hemet Theatre

Susan Carrier - August 4, 2019
It has been just six years since the Historic Hemet Theatre took its first halting steps back to life, hoping to revive its...