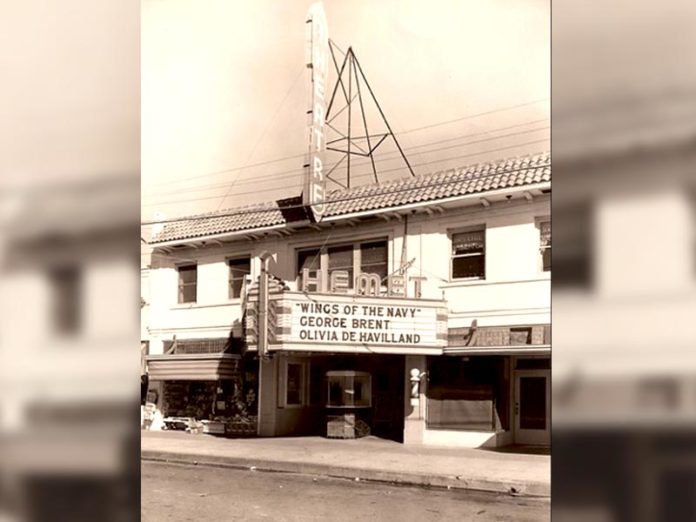 A Jewel in the San Jacinto Valley

The Historic Hemet Theater (HHT) that stands today, built in 1921, is one of the oldest surviving movie houses in the country, it is not however the first movie theater in Hemet’s history. On Florida Street, just across the thoroughfare from the current location, William Martin built the very first theater in 1913.

In 1918, a magnitude 6.8 earthquake on the San Jacinto fault zone, a component of the larger San Andreas transform system, caused significant damage to the theater along with most of the buildings in the Hemet downtown area.

When William Martin rebuilt the theater on the north side of the street, the construction was reinforced with concrete block walls that remain to this day, as does the nostalgic charm of the 1920’s theater. The theater was renovated in the 1940’s and again in the 1960’s when the pointed marquee was replaced with the existing flat rendition. The theater remained in operation under the vigilant eye of Harold Martin (William’s son) through the 1970’s and in 2000, the Martin family sold the property to David Bernal and Emerson Bixby, two ardent movie fans.

After being the oldest continually run single-screen movie-theater in the nation, the venue was forced to shut-down in January 2010, when a fire destroyed the neighboring storefronts. Water damage from extinguishing efforts leaked into the auditorium, leaving a moldy smell that remained for a year. Fortunately the treasured landmark suffered no structural damage. This was attributed to the reinforced concrete construction that was used for the building. The sturdy construction also represents a considerable benefit for any possible future restoration plans since the movie house is one of only a few local buildings of that era that can be restored without any earthquake retro-fitting.

After the fire, the theater encountered an uphill battle to get back on its feet. In 2013, the Historic Hemet Theater Foundation negotiated a 5-year lease/option to buy the business. The Foundation returned the facility to full operation as a Community Arts Center hosting a wide variety of entertainment, including films, concerts, plays and seminars, as well as a wide range of public and private events, and began raising funds for the purchase and restoration of this valley treasure.

In March 2018, the Foundation secured the purchase of the theater with financing provided by the previous owners, at which point the “Century Club” campaign was initiated to raise funds for the renovation of the theater within the next four years — just in time for the 100th Birthday Celebration.

The Historic Hemet Theatre Foundation, was incorporated in 2011 under the name, “The Valley View Foundation.”

As their website says, “The Valley View Foundation is established to improve the quality of life throughout the valley community through: 1) preservation of the Historic Hemet Theater (one of the oldest in the nation); 2) cultural enrichment through the performing arts and educational programming; and 3) economic revitalization of Hemet’s historic downtown district.”