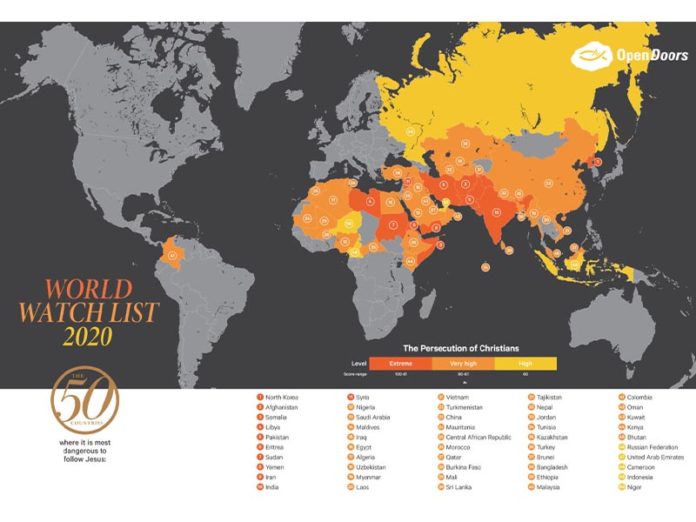 “As we seek to better understand the dangers Christians face worldwide, it is important to track the difference types of violent acts being committed against our brothers and sisters. As always, the results are horrifying, and we hope that bringing light to these atrocities will urge world and local leaders to action,” said David Curry, president and CEO of Open Doors USA.

Among the most shocking violence-related data disclosed during Open Doors’ annual World Watch List press conference today was a report citing that more than 9,000 churches and Christian buildings were attacked in 51 countries in 2019; more than 5,500 of those attacks took place in China. This number represents more than a 1000 percent increase since 2018.

While attacks of buildings and churches rose, Christians killed for faith-related reasons dropped from approximately 4,300 in 2019 to some 2,900 in 2020. The reason for this decrease was primarily found in Nigeria, as militant Fulani herdsmen shifted focus from raiding homesteads and communities to kidnappings and roadblocks. An increase was seen in the number of Christians detained without trial, arrested, sentenced and/or imprisoned—rising from 3,150 in 2019 to some 3,700 in 2020.

The data found that a startling 14,645 Christians were physically or mentally abused, with the majority of that activity occurring in India, China and sub-Saharan African countries where a myriad of jihadist groups aim to create instability. At least 8,500 Christians were raped or sexually abused for reasons related to their faith, a number that should be regarded as the tip of the iceberg, since most sexual harassment happens behind closed doors and is, therefore, more difficult to accurately track.

Persecution at a Glance

Christians remain one of the most persecuted religious groups in the world. While persecution of Christians takes many forms, it is defined as any hostility experienced as a result of identification with Christ. Christians throughout the world continue to risk imprisonment, loss of home and assets, torture, rape, and even death as a result of their faith.

The Open Doors World Watch List is the only comprehensive, annual survey of the state of religious liberty for Christians around the world. From Nov. 1, 2018 to Oct. 31, 2019, researchers measured the degree of freedom a Christian has to live out his or her faith in five spheres of life—private, family, community, national and church, plus a sixth category measuring the degree of violence. Points are given for each incident of persecution, and the total points provide the ranking for each country. For more information on the methodology of the Open Doors World Watch List, please visit OpenDoorsUSA.org.

For more than 60 years, Open Doors USA has worked in the world’s most oppressive and restrictive countries for Christians. Open Doors works to equip and encourage Christians living in dangerous circumstances with the threat of persecution and equips the Western church to advocate for the persecuted. Christians are one of the most persecuted religious groups in the world and are oppressed in at least 60 countries. For more information, visit OpenDoorsUSA.org.

Yes, You Have a Job – Rehab Planet Earth!

Susan Beckett - October 3, 2019
Just about everyone has their own horror stories about moving! What should be a great experience of relocation often turns into a nightmare of paper-signing, open house, and packing. The twists and turns of selling and moving can be mind-boggling for sure.

Finding a Priceless Pearl in a Sea of Pandemic Problems

Contributed - March 19, 2021
Ray Welch of Orange, California, found a "priceless pearl" nearly two decades ago. Since then, his life has never been the same. He left behind a life in law enforcement as a frequent SWAT-team negotiator and found peace after discovering truths about God and began drawing close to Him. While Welch always sought to serve others, "the opportunity of serving God has had no comparison," he said. Welch is not alone.