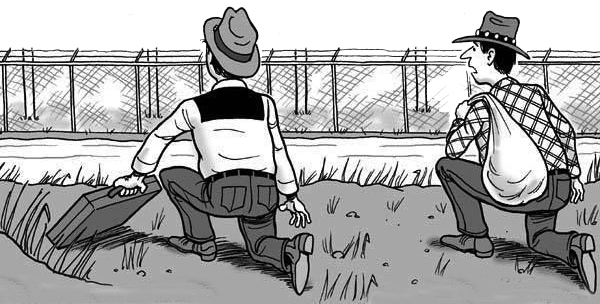 We ask ourselves, why can’t people stay in their own countries, why do so many leave their places of birth, their unique cultures and languages, their loved relatives and in a word their entire lives, to emigrate to other latitudes where they are not welcome? Most of these people through no fault of their own are forced to seek survival for themselves and their families elsewhere. Failed and corrupt governments unable or unwilling to provide economic opportunities for their people, are responsible in many cases, natural phenomena such and draught and plague that bring about famine, political upheaval, lack of safety for the population and many other factors contribute to the outpouring of humanity from disadvantaged countries.

Employment opportunities and better standards of living in host countries are huge attractions for people who have nothing to lose, and are willing to risk everything for an improved life.

Countries in eastern and western Europe, Asia and America, are grappling with waves of immigrants coming from Africa, the Middle East, and Central and South America, immigrants that are willing to tackle every kind of job no matter how menial it may be, work they say locals will not perform. Unskilled, low paying jobs that keep the costs of products low so everybody can buy cheap and companies can compete in a world labor market and survive. The cost of union and non-union labor is so high in developed countries in sectors of the economy like agriculture, services and manufacturing that unless there is a source of inexpensive labor, these companies would fail, bringing about many negative social and fiscal repercussions for the entire population.

Were it not for this pool of cheap hand labor; some crops would not be harvested and left to rot like occurred in the UK in 2018; $13 million in crops in California were not harvested because no one was willing to work jobs vacated by migrants.

Additionally, labor trafficking in manufacturing has occurred in the garment industry and in food processing plants in the United States. Both men and women are forced to work 10-12 hour days, 6-7 days per week with little or no break time.

People may be trafficked into garment industry jobs such as sewing, assembling, pressing, or packing apparel. Others may be forced to work in food processing operations that include slaughtering, preserving, canning and packing goods for distribution.

Immigrant workers, including some with H-2B visas, who arrive in the U. S. to perform non-agricultural labor or temporary services, are often recruited into these industries.

Immigration, both legal and illegal has been kicked around like a political soccer ball by the governing class so as to keep their positions, salaries and benefits that are underwritten by the common taxpayer – perks that are not offered in private business for these perpetual public servants.

The voting public in these democracies have the final say. Shall we continue to tolerate that lawmakers here in Washington and other capitals of the world maintain a hands-off attitude towards an immigration issue that unjustly affects millions of human beings that can and should be legally incorporated into a society to which they already contribute, without their fair share of retribution?

THE HISTORY OF LABOR DAY IS FILLED WITH VIOLENCE AND DEATH

Rusty Strait - August 30, 2019
Labor Day is celebrated in the United States as a time to honor America's labor force. We take long weekends off and enjoy our few hours away from work as though it were something guaranteed under the Constitution.

STRAIT-ON – HOW THE WOMEN’S MOVEMENT HAVE CHANGED THE ROLE OF...

Rusty Strait - March 12, 2020
When I was a child and for a long time thereafter, it was always, “Wait till your father gets home.” That was usually a sign of some punishment