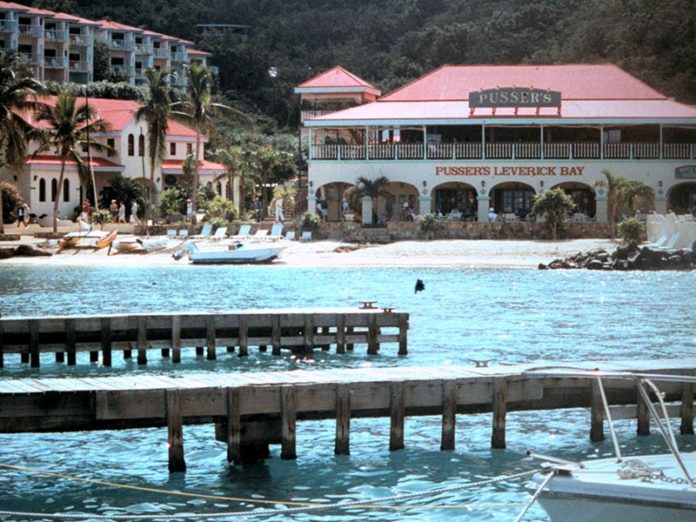 My husband Lloyd and I enjoyed cruising on the 190-passenger, luxurious “Seabourn Spirit,” from San Juan, Puerto Rico. A representative of Seabourn met us at the airport and took us in a van to the El San Juan Hotel and Casino for two days, with an exclusive Seabourn Hospitality Desk for us passengers.

Where the Caribbean meets the Atlantic, the British Virgin Islands are a loose range of 60 islands and reefs, with only about fifteen being populated. The British Virgin Islands are about 50 miles from Little Tobago to Virgin Gorda, starting 60 miles east of Puerto Rico, and a mile from the U.S. Virgin Island of St. John (the other islands being St. Croix and St. John). With hundreds of secret bays and concealed hidden coves, the islands were a refuge for seafarers for centuries.

When boarding our “Seabourn Spirit,” gloved Norwegian Seabourn representatives escorted us to our gorgeous suite, where a bottle of Reims French champagne waited for us. The following morning, we dropped anchor off the island of Virgin Gorda, our tenders taking us ashore at Leverick Bay. We boarded an open-air safari wagon with canopies, for a spectacular scenic ride across the island, which is eight-and-a-half-miles long, and the third largest in the Island chain.

We enjoyed unspoiled beauty, traveling the hill on a twisting road past Gorda Peak, with its impressive slopes tumbling to the turquoise waters below: we were afforded far-reaching views of island-studded bays and sheltered coves. Gorda Peak National Park has the island’s tallest peak, with an elevation of 1,500 feet.

Exploring the picturesque route beyond Gorda Peak, the historic monument of Copper Mine Point is at the southern section of the island. Overgrown ruins at the termination of a rock-strewn road gave testimony to early mining labors. The copper mine was initially tapped by Spanish travelers in the 18th century.  Cornish workers managed the mine from 1838 to 1867. The mine provides a look of what remains of a chimney, boiler house, cistern, and mine shafts.

Stone-age Ciboney Indians were succeeded, some time before 500 A.D, by peaceful Awawaks, who navigated from South America in dugout canoes and who toiled the land. They were then destroyed by the fierce Caribs, whose fondness for preparing a meal out of human flesh brought about the word “cannibal.” Consequently, the original travelers to the British Virgin Islands were Arawak and Carib Indians, followed by early English adventurers, Dutch, French and Spanish explorers, marauding pirates, plantation owners, Quakers, and other newcomers.

Virgin Gorda was called the “fat virgin” by the Spaniards, who thought its outline from the south resembled a reclining pregnant woman. Christopher Columbus sailed through the archipelago on his second voyage in 1493, and chose to name the entire series of islands and islets after the German Saint Ursula and the 11,000 virgins, who chose death in 14th century Cologne, rather than yield to the customs of plundering Huns.

After Columbus, the adventurers, the pirates, and the buccaneers arrived, preying on the Spanish galleons sailing to Europe with Incan gold. Buccaneers of the “Spanish Main” conveyed treasures of gold and silver to the British Virgin Islands. Some of it sank on the harsh coral reefs, and treasure is still buried, with some folks still looking for the treasures.

The territory was once claimed for Spain. Her ships, headed home with riches from the New World, were consistently attacked by outlaw pirates and privateers appointed by Spain’s European opponents. Each island, with no definite configuration, and with innumerable crannies and bays, was perfect hiding bases for buccaneers such as Henry Morgan and Sir John Hawkins.

The Spanish occupied the islands fleetingly, before the Dutch, repositioned from St. Maarten, appeared in 1620. Inhabiting Virgin Gorda in 1648, the British founded a plantation economy and cultivated the sugar industry with slaves to work the cane fields, also launching cotton and indigo plantations. There were clashes between the French, Spanish, Dutch, Danes, and diverse pirates, with Britain buccaneers appropriating/rec,aiming the islands in 1666.  Britain has possessed the islands ever since.

In 1773, the islands were pronounced British territories.

When slavery was ended in 1838, the plantations depreciated, and many Europeans returned home. In 1853, after an ill-fated plantation period, the British Virgin Islands were abandoned to its former slaves. With the abolition of slavery in 1834, the population, once more than 8,000, declined to about 1,500.

We left our comfortable safari bus and began our descent to the fine white sand of the beautiful beach. It was perfect for snorkeling, with a fantasyland of coral configurations, sea fans, and vividly colored marine life. Below the clear water, we saw coral, a fascinating group of sea caves, caverns, and tunnels, with colorful fish.

The Baths is the name given to an assemblage of boulders in this area and is Virgin Gorda’s most-visited site. A local escort guided us on the Devil Bay National Park Trail, a demanding and strenuous hike through, under, over, and between rocks and boulders. Lloyd and I maneuvered along the winding narrow Trail, as well as irregular ground on foot, while climbing down a tortuous, rocky downhill path to the huge boulders. Sitting at the edge of the beach, we saw white and rounded boulders eight to ten feet high, comparable to those I saw while visiting the Seychelles Islands.

The smooth rocks were buried in the sand, and all over each other. The delightfully warm ocean flowed in, creating labyrinths of peaceful channels and crystal-clear pools that sparkled in the light that entered between the huge boulders and grottoes. We swam and meandered in a tangle of exquisite pools, warmer than the ocean water outside, while we rambled through the labyrinths that were sculpted by the surf and wind.

Unusual rock formations, and enormous granite boulders, leaned against one another, forming many-shaped heights and caverns. Granite is a stone not usually seen south of the Carolinas, and not normally seen in the Caribbean. It is felt that these boulders were conveyed to the surface ages ago by a massive volcanic eruption. A detailed look at the geology of The Baths is in Charles A. Ratte’s book, “The Story of the Boulders.”

Small trails led us to and around shallow pools underneath the boulders. We clambered up and down the ladders, bending, and crawling. It was challenging, inching along on my hands and knees among the boulders, trying to keep my balance, while holding onto my heavy Canon AE-1 camera to keep it dry.

A must for travelers, the distinctive Virgin Gorda Baths are one of the British Virgin Islands’ most recognized landmarks, with exquisite grottoes of sugary fine sand and secluded pools. Most people are astounded by the size of these boulders, piled on top of each other, with some being as large small cars.

We retraced our way back along the 350-yard trail, resting frequently.  Huffing and puffing, we arrived back at the top. We were rewarded with assorted fruit, and tasty rum punches, where our safari wagons awaited us, for another scenic ride across the island, with photo stops along the way. We saw charming cottages, dazzling bougainvillea, cozy-looking inns and villas, lovely resorts and luxury yachts.

The island is covered with vegetation and cactus and is populated by lizards and geckos. Birds include warblers, and there are cattle egrets on the plains. The amateur geologist discovers stones such as malachite and crystals, in the quartz among the rock-strewn island.

Our safari wagons transported us back to Leverick Bay at Gorda Sound, where our “Seabourn Spirit” was anchored for the day. We went to the Leverick Bay Resort, and to Pusser’s Bar, which is celebrated for their rum “painkillers.” From 1635 to 1970, rum distributed by the ship’s purser was the daily drink of sailors in Britain’s Royal Navy, one of the lengthiest continuous customs in maritime days. Seafood and Caribbean specialties are highlighted in local restaurants on the island.

Virgin Gorda has a natural beauty, and we didn’t see any high-rise hotels or huge resort developments. The tempo of life is leisurely on Virgin Gorda, and we could enjoy swimming at beaches, coves and turquoise bays, that are unaffected except by nature. The attraction of the British Virgin Islands is serenity, so we saw few dance clubs, no high rises, and no jets, or mammoth cruise ships.

Lloyd and I were thrilled to have been able to go to this tropical sanctuary, with its chain of islands surrounded by clear, azure waters. Our tenders returned us to our waiting “Seabourn Spirit,” anchored in Gorda Sound. The azure waters gently lapped o our ship, as we leisurely sailed towards our next port of call, the British Virgin Island of Prickley Pear.