Joe Biden was never exactly a colossus bestriding the Earth, but he’s been getting smaller by the day. A Washington Post poll over the weekend suggested that his presidency is, for now, a smoking political crater. It had him at a 41% approval rating, despite the passage of his long-sought infrastructure bill that was supposed to buoy him and his party.

Even more striking, the survey found that Republicans lead Democrats on the generic congressional ballot by 10 points, 51% to 41%, an unprecedentedly strong showing for the GOP that forecasts an earthquake, tsunami and maybe a few more natural disasters for Democrats come next fall.

And who can be surprised? Biden is stumbling, out of touch and weak. Two of his major initiatives, at the border and in Afghanistan, created completely avoidable catastrophes. He has given no sense of being in control of events or even his own party. He is an accidental president who is running smack into his own inadequacies and absurd pretensions. No one in Washington over the last four decades ever said that Joe Biden was just the man with the foresight, wisdom and deft political touch to lead the free world.

No, he was an average senatorial bloviator whose first two presidential campaigns flamed out in embarrassing fashion, before he hit the jackpot when Barack Obama choose him as his running mate in 2008.

The best case for Biden’s presidency was that he could be a kind of consensus caretaker — restoring a sense of normality and maintaining a low profile while riding in the slipstream of improving economic conditions and a diminishing pandemic.

Instead, he’s been carried along by the left-wing tide of his party and repeatedly engaged in unconstitutional executive overreach. On top of it all, he’s brought his own brand of incompetence, exemplified by the botched pull-out from Afghanistan.

His foremost mistake was overestimating an attenuated electoral mandate for pedestrian governance as a permission slip for passing nearly the entirety of the progressive agenda in the space of less than a year. Not only has there been sticker shock over the price tag of the Biden agenda, but it has little connection to things people truly care about. The infrastructure bill polls well, but no one goes about their daily lives worried about the alleged crisis of crumbling bridges and tunnels.

Meanwhile, the Build Back Better bill started as a $3.5 trillion grab bag of everything that progressives want but couldn’t get in the infrastructure bill. Passing as much spending as you possibly can before you lose Congress a year from now, which is essentially the rationale behind Build Back Better, is not a compelling reason for a historic spate of federal spending. That legislation has been pared down to largely a child care and climate change bill.

That’s an unnatural pairing that came about not because those are the top two things that the public wants from Washington, but because they happen to be what Democrats think they can pass.

Only now is the White House trying to argue that the infrastructure bill and Build Back Better will address real public concerns, namely the supply chain disruptions and the inflation that is outpacing wage growth. This is clearly a tendentious, after-the-fact argument.

The White House can hope that the supply chain bottlenecks ease and inflation declines, but Biden’s disastrous first year speaks to a more intractable problem with the lackluster occupant of the Oval Office himself.

Contributed - July 17, 2021
The whole world is abuzz with news that COVID vaccines cause our bodies to become magnetized. There are countless videos on the internet demonstrating how metal objects start to stick to people who have recently been vaccinated. It is not clear if the site of injection is magnetized or we, the vaccinated ones, turn into magnets. It does, however, explain why, after receiving my vaccinations, my needle now is always pointing North. That is the basic theory behind magnets and if you don’t know it, I have to complain about our educational system. 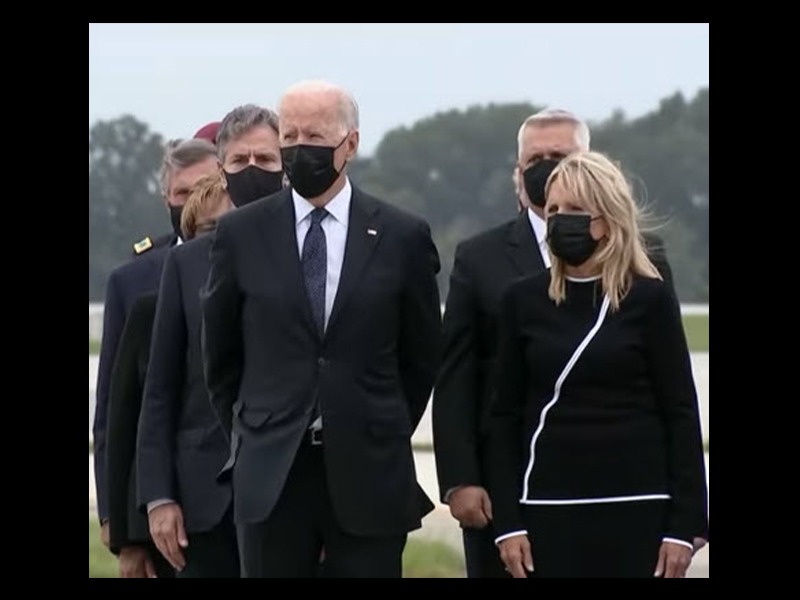 Biden blew it speaking to the wife of a Marine killed...

Contributed - September 5, 2021
We’ve written about Biden checking his watch while he was at Dover yesterday watching the transfer of those who died in Kabul from the airplane to the hearses that will drive them to their final resting places. He also failed to understand that, as Commander-in-Chief, he should have saluted the coffins as they were carried past him, rather than putting his hand on his heart, and, as the picture below shows, he stood at “parade rest” rather than attention (although that may have been old bones protesting). It was all a telling breach of protocol and it turns out that Biden was just as tone-deaf in his dealings with the families of those who died.