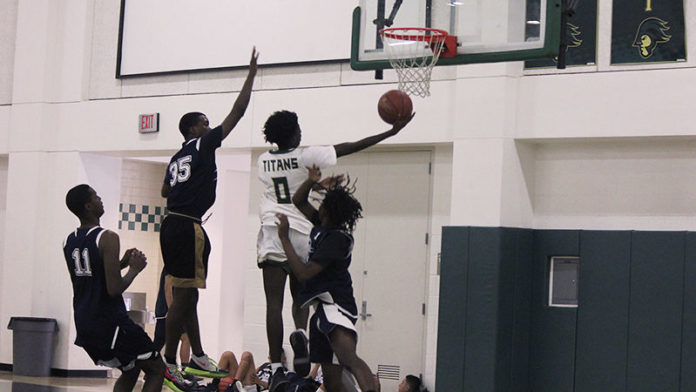 Gametime nonprofit hosted a two-day basketball tournament at Tahquitz high school on June 29th and 30th. The tournament had six different age brackets, and over 40 teams showed up to play. All three courts inside Tahquitz’s gym were constantly moving with kids of all ages expressing their love for the game. You could find Ralph (owners and operator of Gametime) running around the building checking on scores, teams, referees, and spectators.

The winners from each division are as follows; 10u West Coast Bruins, 11U LB 6ers, 12u LB 6ers, 14u Pass Elite, JV LB 6ers, Varsity FBC. Ralph would like to shout out to all the teams who participated and every player who left it all on the court over the weekend.
I watch the Tahquitz Titans team play against FBC (a club basketball team) in the first varsity game, It started off really close. Both sides where showing aggressiveness and passion.

Tahquitz game was focused on attacking the lane and making FBC close out on the key, as soon as FBC started getting used to what Tahquitz was doing they began to dish the ball out to the corners where their sharpshooters were posted ready to score. In the first half, both teams traded blows and alternated the lead. By the end of the half, the score was 26-24 Tahquitz had the lead.

The second half the Titans came out dedicated to defense, they looked to steal the ball, jump on lazy passes, and rebound. They slowed the tempo down a couple of steps and forced FBC to play their game. Tahquitz’s strategy paid off pulling out the win with a score of 51-44 lead by Team Captains, Antoine Sullivan who scored 11 points, 6 assists, and 7 rebounds and Jaden Haywood who had a double-double with 12 points 3 assists and 10 rebounds.

FBC needed a win in their next game; they matched up against Hemet High School in the tournament. It didn’t look good at first for FBC; they were frustrated and emotional. The loss in the first game was hanging over them, and two losses in a tournament like this mean you are out, so it was important that they came together as a team.

In the first half, FBC didn’t look organized at all, the coach was yelling at the players for no apparent reason, some players were yelling back at the coach, and two players started arguing with the referees, all while Roman Swizek of Hemet lit up the scoreboard with 16 points in the first half. The halftime score was 29- 22 Hemet had the lead.

At half time the head coach of FBC pulled his team together and talked to them about playing as a team, something he said really clicked with his team because they put their heads down and began to play good team basketball, Roman Swizek continued the offensive onslaught scoring 10 points in the second half, but Hemet missed a couple of key free throws costing them the game. FBC took the victory in 51-56 in this game which gave them the positive momentum they needed to finish out the tournament strong.