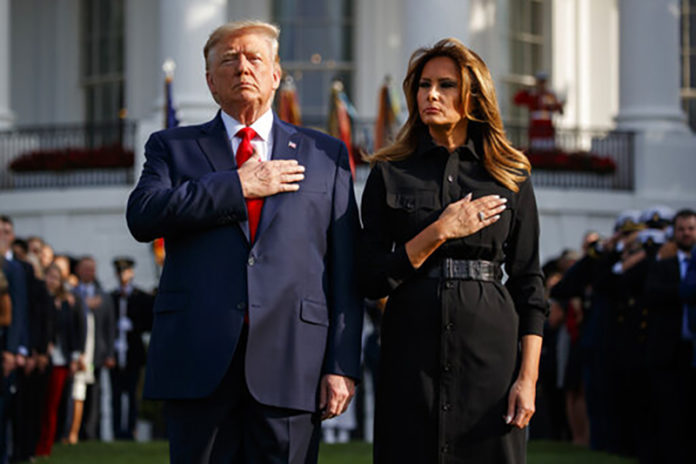 Like his two most immediate predecessors, President Donald Trump marked the anniversary of the Sept. 11 attacks in a speech at the Pentagon and, like them, still unable to end America’s longest war, in Afghanistan.

Trump’s 9/11 speech on Wednesday came just five days after he called off U.S. talks with the Taliban, abruptly ending nearly a year of hopeful negotiations by a State Department envoy who said he was on the “threshold” of a peace agreement aimed at ending the conflict.

It has been 18 years since al-Qaida hijackers commandeered four U.S. commercial airliners and crashed them into the World Trade Center, the Pentagon and a field in Shanksville, Pennsylvania. Nearly 3,000 people were killed in the largest attack on American soil.

Like Presidents Barack Obama and George W. Bush, Trump remembered the victims, first responders and U.S. troops who have battled in Afghanistan, where the Taliban hosted al-Qaida leaders as they plotted 9/11.

“For the families who join us, this is your anniversary of personal and permanent loss,” Trump said. “It’s the day that has replayed in your memory a thousand times over. The last kiss. The last phone call. The last time hearing those precious words, ‘I love you.’”

“Then the attack, the anguish of knowing your family member had boarded one of these flights or was working at the World Trade Center or serving right here at the Pentagon,” he said. “You waited. You prayed. You answered that most dreaded call, and your life changed forever.”

Trump said he went to the scene of the downed twin towers and saw the first responders working.

“I went down to ground zero with men who worked for me to try to help in any little way that we could,” Trump said. “We were not alone. So many others were scattered around trying to do the same. They were all trying to help.”

Some of Trump’s statements about his 9/11 experiences cannot be verified, including claims that he sent construction crews to help clear the site, that he had “hundreds” of friends die at ground zero and that he witnessed television coverage of Muslims in the U.S. cheering the destruction.

The moment of silence at the Pentagon is traditionally observed at 9:37 a.m., the time when a plane was flown into the building. But this year, the anniversary was observed 10 minutes late, at 9:47 a.m., with Trump running behind schedule.

In his speech, he had tough words for the Taliban following the end of peace talks.

“If anyone dares to strike our land, we will respond with the full measure of American power and the iron will of the American spirit,” Trump said.

“If, for any reason, they come back to our country, we will go wherever they are and use power the likes of which the United States has never used before, and I’m not even talking about nuclear power,” Trump said without elaborating on what he meant.

Despite Trump’s verbal threats, his envoy, Zalmay Khalilzad, has been sitting across the table from Taliban leaders in Doha, Qatar, for months discussing a U.S. troop withdrawal and Taliban guarantees to keep Afghanistan from again becoming a launch pad for global terror attacks.

Those talks came to an abrupt halt last weekend when Trump tweeted that he had canceled a proposed meeting with the Taliban and members of the Afghan government at the Camp David presidential retreat in Maryland.

Many Afghans fear his canceling the talks will mean more carnage as the U.S. and Taliban, as well as Afghan forces, step up their offensives and civilians die in the crossfire.

Trump said he canceled the talks after the Taliban detonated a car bomb on Sept. 5 and killed two troops — one American and one Romanian — and 10 civilians in a busy diplomatic area near the U.S. Embassy in Kabul.

Trump’s continued reference to ending the talks after one American service member was killed has upset many Afghans, who witness near-daily attacks.

As America mourned 9/11, weary Afghans are watching their own toll from the aftermath continue to rise exponentially. The Taliban and U.S. and Afghan forces are all to blame.

For the first time, more Afghan civilians have been killed by international and Afghan forces than by the Taliban and other insurgents, the United Nations said of the first three months of this year, with thousands more wounded by insurgent attacks.

Several hours after Trump left the Pentagon memorial, Bush, who was president during the Sept. 11, 2001, attacks, visited for a separate, private wreath-laying. Bush was joined by former Defense Secretary Donald Rumsfeld, who was in his Pentagon office when the plane hit the building.