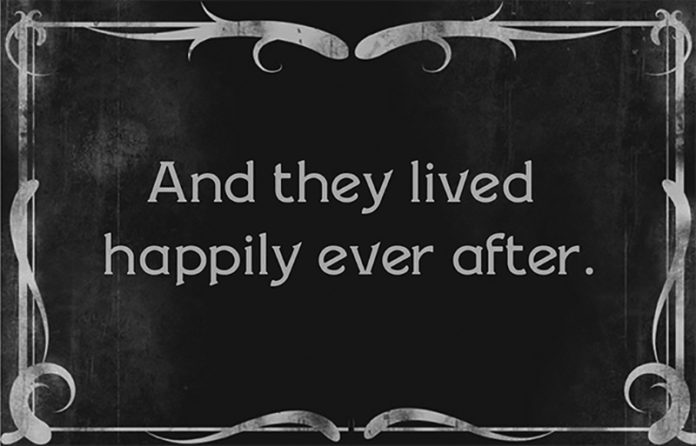 (Once upon a time)

Now, I know that I am not the first person to say it, but that is the shortest fairy tale that one can write. It has that distant feel of a time long ago, maybe even of a land far away, and the warmth that comes with wishing for a happy ending.

The concept of “happily ever after” has eluded humankind ever since Eve took a bite of that wretched fruit. Some people say it was an apple, and I can never eat an apple without feeling that guilt of having done something wrong. Even though I wasn’t the one to blame, I still feel somehow responsible. Some cultures say that it was probably wheat. Therefore, eating bread is always considered harmful, and every diet that comes along—well, almost every diet—tends to emphasize giving up bread.

But, what really is “happily ever after”? I remember a comedian once said that when he was young, he would be watching TV and wishing that he was with someone special, doing things that bring “happy” to one’s self; now that he was old, he maybe with someone special, but find himself wishing that he was rather watching TV. As you can see, “happily ever after” is not the same as it once was. As we get older, our perspective on things changes; definitions of things change.

Fairy tales change their significance as we grow older. That may seem disappointing to some, but that is the reality of things. Disney has made a fortune from the stories of princesses and their associated princes, but can you imagine spending a lifetime with a princess. Imagine the frustration of going through each and every day. It is not just about singing and dancing; there is real life to live. And, kids, real life is never a fairy tale. There are bills to be paid, and I don’t know anyone who has the means to pay their bills when the “ever after” comes knocking on one’s door. Maybe someone like Bill Gates, possibly, but the rest of us don’t even have a prayer to rely on.

The other day Covered California ended my health insurance. There was no explanation, other than a note on my account that I had actually indicated to them that I didn’t need health insurance. For the life of me, I can’t see how in the world I would have said something like that. Call it a computer glitch, if you may, but my health insurance is canceled. All the appointments I had made, now can’t be kept. You can see how my “happily ever after” has suddenly hit a stumbling block.

I have a doctor friend who does not believe in pursuing “happily ever after.” You only get a few years of bliss, according to him, and then it is one long, empty, lonely stretch, where you spend time wondering where things went wrong. For most people, things went wrong with the arrival of their first child. It is downhill after that.

The “high” of a newfound love fades away in three to four years, he says, and then you have to deal with one issue after the other, until you find yourself doing things separately from the other half of your “happily ever after.” Another friend is adamant that the passion we feel at the beginning of this journey, usually gives way to just merely cordial relationship, at best, towards the end. You might as well be brother and sister, according to him.

I believe in the theory that one should lease instead of purchase. The passion starts with a bang and then slowly fades away. It is time to then change to a newer, slicker model. Passion then starts again with a bang, and well, the cycle repeats itself.

I know some people would disagree with me and may even dismiss my babbling as nonsense, because they happen to have their “perfect companion” on their way to a blissful ending. I only add that it may be more blissful if they were traveling by themselves. At least they could then enjoy the journey, admire the scenery, without worrying about the constant nagging interruptions that inevitably creep in when one spends way too much time with another human being. Throw into the mix a bunch of kids, randomly spread throughout the trip, and see if anyone even listens to the cries of a wounded soul, yearning for a little attention, hoping for someone to give a darn.

Once upon a time, they “occasionally” lived happily. Now that sounds like a better tale.

Search: Once upon a time