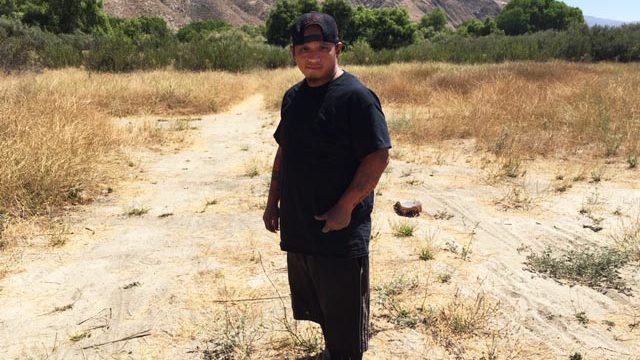 A son pulls his father up out of homelessness, and an HSJ Chronicle reporter is there to help.

(Out of the shadows) This is part of what will be an ongoing series on the unfortunate “devils duo” of homelessness and mental illness, which will eventually focus on mental illness itself.

We start the series with the story of Matt, a homeless man who thought the word “homeless” was the last adjective that would ever be used to describe him. “I had a good job at Amazon. I had a car and I had a life. Then I got fired for being four minutes late back from lunch…and things went downhill from there,” says 39-year-old Matt Lujan, adding “Living in a dry riverbed is the last thing I thought I’d be doing.”

But live there he does. With his dad. “It started…this feeling that “I’ve got to do something. I’m better than this” started a few weeks ago when I realized that it was exactly one year that I had come here to get my dad out of depression and out of the tent where he’s living,” says Lujan. “I can’t stand it that this is where my dad is living. He’s got emphysema and this is no good.”

Would the unseen eyes of an unseen camp welcome outsiders? Would the elder Lujan care to take the word of yet another “handout” in place of what’s needed, which is a hand up? Those living in hell might welcome a drink of water, but even when the cup is empty…they’re still in hell. And in the heat of an August afternoon in Hemet, I felt as though I hadn’t much but a very small cup of water in an awful lot of hell, as we walked off the levy path into an unseen community.

I meant Lujan when reporter Dennis Fletcher asked my help in getting father and son out of the dry river bed on Soboba Road. “I realized that these people…they all just wait around for things to happen, but I’ve got to go out and make things happen…for my dad and me,” said Lujan.

I could see where the Valentine’s Day flood had cut a rut in the river floor. “It reached as high as the bottom of that tree,” said the younger Lujan, pointing to a spot approximately 6 feet from ground level. When asked if the authorities gave any assistance during the flood, Lujan said, “Well, about two weeks before the flood, they warned us that it was coming…but nobody paid attention. Like when I got carjacked. I told the police the car was stolen. They were ice enough to put an APB out for me. But out here…we don’t trust too many people. That’s why no one really listened about the flood.” When the floodwaters came, they came quick, hard and without regard for life, property…and puppies. “Yeah, we lost our puppy; got swept away. It came so quick, the water. My dad had already been depressed since my mom left, and I realized I had been depressed too. I had gotten too used to things being this way over the last year. Instead of pulling my dad up…the situation pulled me down…and I had to change that.”

Matt pulled himself together physically, mentally and emotionally. He realized how full of despair he had been, and realized that if he was going to change, he was going to have to regain his confidence and also learn to trust again: that’s when HSJ Chronicle’s Dennis Fletcher reached out a hand to help. In the Jack-in-the-box eating breakfast bought by Fletcher, a somber Lujan relayed an all-too-familiar story of how bad choices and bad consequences attract and feed off each other as they fuel mental illness and bring a once-productive member of the community to the point of living in a tent.

We were about to see if Lujan’s father’s depression had gotten to the point where he would ignore if not reject-both verbally and physically-the help he needed. That’s where we pick up the story in part II. (Out of the shadows)

Search: Out of the shadows