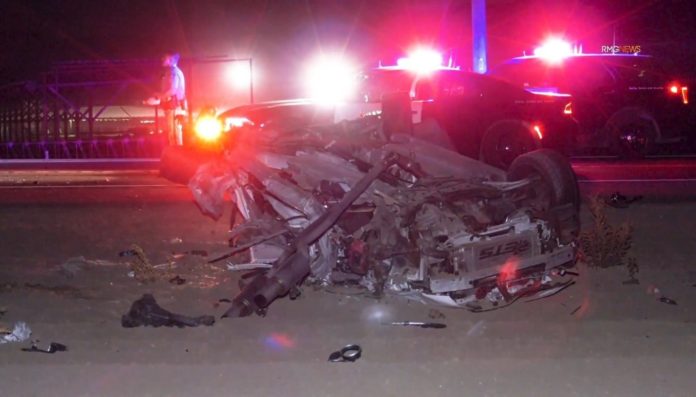 SAN JACINTO — Authorities are investigating the cause of a two-vehicle, head-on collision between a big-rig and passenger vehicle that left one person dead at the scene on Saturday, August 10 that happened on Ramona Expressway near Bridge St.

The fatal crash, which left both vehicles heavily damaged and the sedan upside down on its roof, happened on Ramona Expressway east of Bridge St.

CHP, Cal Fire/Riverside County Fire and Riverside County Sheriff’s Departments, along with other emergency personnel, were dispatched to Saturday morning’s deadly collision around 4:10 a.m., according to CHP and Cal Fire officials.

When officials arrived, they found a heavily damaged M&H Transport Inc. tractor-trailer big-rig disabled in the middle of the roadway. M&H Transport’s headquarters is located in Moreno Valley, just five miles from where the accident happened.

A heavily damaged and barely recognizable white sedan was about 100 yards away, upside down and on its roof in a field adjacent the road.

A person’s lifeless body could be seen inside the mangled wreckage of their car and firefighters used the “Jaws of Life” to perform an extensive extrication to remove the victim’s body from the sedan. The driver was later pronounced deceased at the scene.

Riverside County Sheriff-Coroner officials today identified 26-year-old, Danny Joya, of San Jacinto, as the man killed in Saturday’s crash. A coroner’s release indicated Joya succumbed to his injuries at the scene and was pronounced deceased at 4:24 a.m.

The driver of the big-rig was evaluated by paramedics at the scene but was uninjured and declined further treatment.

As their investigation was getting underway, officials reported that debris was spread across 200 yards of the roadway, and that despite the extensive wreckage, vehicles were continuing to drive “through the area at high speeds,” according to a CHP incident log.

Another person died on the morning of Monday, August 12, in a head-on collision along the same, two-mile stretch of Ramona Expressway in San Jacinto that claimed another man’s life just two days earlier. The driver who reportedly caused the fatal crash was hospitalized.

The deadly collision, which happened west of Warren Rd., was the second fatal crash on Ramona Expressway in the last two days. The earlier head-on crash between a passenger vehicle and big-rig, which happened early Saturday morning, August 10, near Bridge St., killed 26-year-old, Danny Joya, of San Jacinto.

Officials have identified a woman who died as a result of a two-vehicle, head-on crash involving two passenger vehicles, early Monday morning, August 12. The fatal accident happened on Ramona Expressway, about a quarter-mile west of Warren Rd.

Riverside County Sheriff-Coroner officials identified Erika Amaya, 43, of Moreno Valley, as the woman killed in Monday’s crash. A coroner’s release indicated Amaya succumbed to her injuries at the scene and was pronounced deceased at 4:45 a.m.

Deputies from the San Jacinto Sheriff Station, along with CHP, Cal Fire/Riverside County Fire Department, and AMR, were dispatched to the deadly crash at about 4:35 a.m., Riverside Sheriff’s Sgt. Bryan De Loss has since reported.

When officials arrived, they found two heavily damaged vehicles that had collided head-on. DeLoss described the vehicles as a white, Chevrolet sedan and green, Hyundai sedan.

Vehicle parts and debris were spread across a large section of the roadway, which was left blocked and impassable by the arrival of numerous official vehicles that responded to the scene of the crash.

The driver and sole occupant of the Chevrolet were pronounced deceased at the scene, according to De Loss and Cal Fire officials.

The driver and sole occupant of the Hyundai who caused the collision was transported to an area hospital for treatment of injuries that Cal Fire described as moderate.

Based on the circumstances, members of San Jacinto Station’s Collision Reconstruction Team responded to the scene of the crash and assumed the investigation.

During their preliminary investigation, deputies determined the deceased victim from the Chevrolet sedan was traveling eastbound on Ramona Expressway just before the collision. At the same time, the Hyundai was being driven westbound.

For reasons yet to be determined, the surviving driver of the Hyundai crossed the double yellow lines “consequently colliding head-on with the Chevrolet,” killing the other driver, De Loss reported.

During the investigation, Ramona Expressway was closed between Bridge St. and Warren Rd. The roadway remained closed for about six hours and was re-opened around 10:30 a.m.

The sheriff’s investigations into both deadly crashes are ongoing.

Anyone with information regarding this collision is encouraged to contact Deputy Cox at the San Jacinto Station at (951) 654-2702. Callers can refer to incident file number I192240014 and can remain anonymous.

RECAP: California on the World Stage at Summit of the Americas

Contributed - May 3, 2022
On April 30, 2022, at about 6:59 PM, deputies from the Riverside County Sheriff’s Department, Southwest Station, responded to the report of a major injury traffic collision near Jefferson Avenue and Calle Cortez in the city of Temecula.