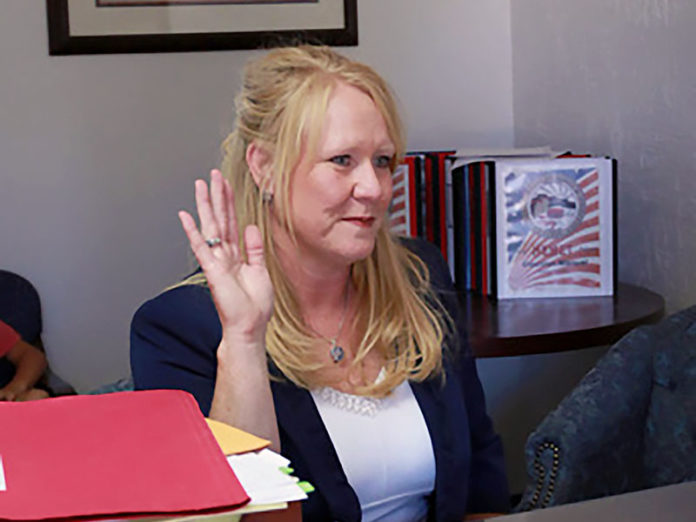 Once a month Hemet Councilwoman Karlee Meyer holds a coffee session with Hemet voters, alternating between the Downtown Deli and Destination Coffee Bar and Bistro.  Her audiences vary in size and sound. This past week she held forth at The Destination. The crowd was larger and noisier than usual. The sessions usually cover any subject or complaint one might bring to the table.  This week the subject was billed basically to be about the homelessness in Hemet which is an issue dear to Karlee. However, as the morning wore on the topics went off in more directions than a mountain highway.

She opened with as follows: “We had a third district task force meeting this week at Supervisor Chuck Washington’s office in Valle Visa.  It is a monthly event and switches between French Valley and Hemet, a collaboration to get the Third Supervisor District all on the same page.  However, I don’t know if we are all on the same page because I heard different opinions from several other cities.” Her opening statement was supposed to set the tone, but hold on.  It was only the calm before the storm. She continued.” My suggestion to the supervisor was that we need a third district solution and not just playing the homeless around the city.

That is not acceptable and creates a larger problem.” She went on to say that we have homeless facilities, homeless gentleman and women and kids that are with some of these quite young families. “Further,” she stated, the homeless teen population is growing.” She said that many of them enjoy their lifestyle and that’s what they want to do. “Even though they choose this lifestyle, I think there are some solutions available.  When I say ‘we,’ I’m not talking about the city. Governor Newsome wants the cities to all pay for it. We don’t have the money to pay for social issues, and homeliness is a social issue. I mean it is a choice for most of these folks to stay out on the streets for whatever reasons whether they have burned bridges or if they actually enjoy their life, or maybe they didn’t have something growing up that they find in the streets.

” She discussed the street drug problems, which make it difficult to deal with some of the street people, and that they carry around all their possessions because they don’t have a place to put them. “They steal from one another, which is also a problem dealing with life on the streets..”

She also brought up a subject that, among the group assembled, and that is the transients, setting them aside from those who have planted roots in the streets of Hemet.   A social worker who claims to have been researching for the past three years on socio-economic issues in Hemet. “While I don’t have a solution for the homeless, what I can tell you is that the cycle of grandparents raising great-grandchildren and great-grandkids raising someone else’s kids is stealing the resources from some that are needier and, because kids are not graduating high school, 8% of the town’s kids, and it may be higher than that, are  considered socio-economically disadvantaged, of that percentage of at-risk youth that will not graduate high school, it is 70%.

So we build these continuation schools or adult schools or bad kid schools or probationary schools and they release kids into the valley with absolutely zero skills.  Some of these kids have no idea who Adolph Hitler was, nor anything about World Wars I and II.  Even a lot of adults don’t know.  This lack of knowledge of things in the past prevents them from knowing anything about their futures or even the present. “We have a generation of kids being raised by a generation of kids that were on drugs, and now those kids have had their kids removed, and we are still stacking this cycle, further taking away resourcing juvenile delinquency.  Teenage homelessness, teen parents are out of control. We service 150 teen pregnancies in our center every year, and it is growing.

Last year our youngest parents was 12 years old. This is real life.” She said that “The commuters who make decisions in these matters don’t know you from a number on the street.” She said we are at ground zero with these kids. If we don’t address this growing situation, then we are going to have 400 times more who are not going to have a voice to say that you need help. We will have anarchy and a town of people sleeping on the streets, and it is just going to be all out to survive. That’s why this is an important meeting. Karlee said, “We are working on the problem.

There are just one too many roach hotels in this town that could become decent housing for the needy to get step up so they can get into something permanent.  We need solid transitional housing, even for some kids. There are kids in the system who have been living in motels for years. Kids were sleeping in cars for a year or two. That shouldn’t. Be. There is money. There are resources, but the ones with influence are the ones who want the money in their own pockets.” It was suggested that non-profits and citizens join forces and when meetings like this come in to use. The government has limitations, whether by choice or not. “That’s where we are a viable solution.” It was further suggested that some non-profits could pool money and resources. “Don’t depend on the city or government. We can’t continue painting the finger forever. We have to be able to do it ourselves. Don’t expect perfection. There are obstacles to overcome.”

It was stated that panhandling is a major issue in the valley.  Someone stated that some research indicates that thanks to the generosity of local taxpayers we are doling out more than $2.5 million annually to panhandlers, claiming that “the average panhandler is taking in $150 a day with fifty full-time panhandlers and perhaps as many as 150 part-timers.  That is more than the average guy is pulling in daily at a legitimate working situation. “We need a campaign,” said one social worker, “to get people to stop giving on the streets, but give to the organizations that can help.

Valley Restart Center is one refuge that takes families as well as individuals, and there are others.  It costs them $240,999 a year to take care of 120 people. If we had a facility that was willing to take care of these folks and had that $2.7 million, we would not have a homeless problem in Hemet. So you generous people out there have got to stop making Hemet the target. That’s a message that needs to go out to this entire valley.” Calling the police on panhandlers has not worked. “By the time we get there, they’ll be gone.  The cops are so busy with serious crimes they don’t always have time to come. They have priorities. As to government and citizens,” Karlee continues, “I’ve said this ever since I’ve been in office.

The citizens of Hemet has created a disconnect between the people and the government. If we don’t work for hand in hand, we will have what we currently have in Hemet. Here is a perfect example of what I mean: Government separating itself from the citizens.  That is not okay. Our police department has gone back into community policing – that is the police being engaged with the citizens, and the citizens need to be engaged with the police department. It was suggested that a regular city town hall might be an excellent way to get more citizen involvement in the problem.

Councilwoman Karlee had a rapid and somewhat angry response that drew much applause from a crowd that seemed to be with her 100%: “The reason that we don’t have town hall meetings in Hemet for the City Council to hear is the same reason that I am the only that makes coffees because some council members only want to hear three minutes from a citizen.” Now, I am not the mayor.  I am not allowed to be the mayor. I was not voted to be the mayor. I was voted out of being the mayor, or maybe we would have town hall meetings. I don’t think too many citizens know how important it is to vote right.

” This Coffee with Karlee was spiced with something besides cream and sugar Councilwoman Myers is no one to shove aside. She has plenty to say and does not seem to fear any unpleasant echoes.  We shall see — this not a ta and crumpets lady. More to follow next week.

Also, another problem became a topic of discussion – panhandling.

BENEATH THE CELEBRATIONS LIES THE PAIN OF WAR

Rusty Strait - November 7, 2019
It might be a family reunion. It might be kids off from school during summer break. It might be a celebration of someone’s wedding or birthday. But it isn’t.

On the right with Robin Lowe

Mark Lentine - November 7, 2019
I am proud to announce that I was just elected President of the California Federation of Republican Women of Hemet-San Jacinto, this past Wednesday, October 23.