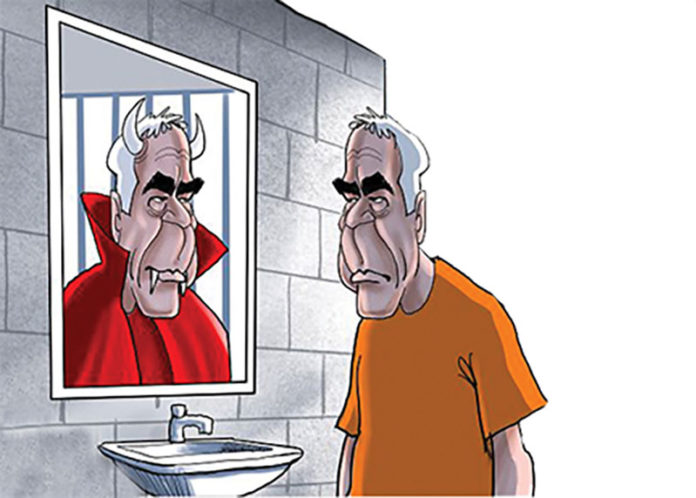 (Epstein was a demon)

Any parent with adolescent daughters ages 14 and 15 years old, must feel a sense of fear and revulsion when learning that a man like Jeffrey Epstein preyed upon underage girls for purposes of forcing them to have sexual relations with him and many other men of prominence.

Several years ago in Florida, Epstein was accused, tried and found guilty of predatory conduct against minor girls, and was handed a laughable jail sentence by the court, that paled in comparison to the magnitude of his crimes.  At the time, he was found keeping company at his mansions, with high profile individuals who would later acquire an even higher profile.

Jeffrey Epstein is now dead and punishment for his heinous acts has been left in suspension, hanging over the victims and every decent person, like an immovable granite boulder, leaving a sense of tragic impotence.

Questions abound as to how a high profile criminal, locked up in a maximum security jail cell with 24/7 sound and video, where even the use of the toilet is under vigilance, who had been on suicide alert as a result of a prior attempt to take his life, hangs himself without being detected until he was found unresponsive. Events like this only take place in third world countries where corruption is rampant in penal institutions.

The FBI is now investigating and will undoubtedly find the truth. Jail staff has been placed on leave and the warden has been reassigned.  Will the facts of the demise of this despicable man be made public or will they be covered up? Will the main stream press apply its investigatory resources towards discovering the truth and publishing their findings?

Too many names of important and influential persons have been connected to the depraved conduct of Epstein, to not be mistrustful about the outcome of the investigations, and if the occasion arises, only a public outcry for justice can blunt the thrust of those in power to maintain the facts hidden.

There is no worse sin than to violate the trust of innocent and unwary children, perverting them from their original course and changing their lives forever.  Men and woman who have no respect for the people whose lives are affected by their misdeeds must be made to pay heavily and punishment for those individuals who made possible Epstein’s escape should be swift and exemplary.

Search: Epstein was a demon