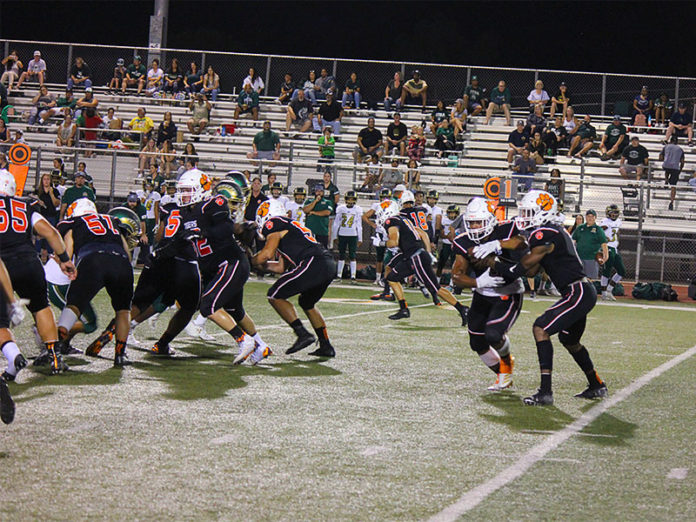 A Slow Start By The Tigers, But A Hot Finish

The long-awaited return of the San Jacinto Tigers football team has finally come. The last time they played in front of their home crowd was last year’s CIF championship game, where hundreds of fans traveled to watch them play, but this is a new season and a new team. San Jacinto needed to come out and make a statement that night after a tough loss the week before to Woodrow High School (Long Beach, CA) and that’s exactly what they did. Murrieta Mesa came into San Jacinto with a 0-2 record to start the season, they felt the pressure to get a win and came out playing like it.

The first quarter was slow for both teams, with very little first downs or yards gained. Coach Galliano of the San Jacinto Tigers had this to say about the slow start: “They did some things defensively that we haven’t seen yet, so we needed to make adjustments heading into the half.” The Tigers were able to get into the endzone three times in the first half, including an amazing last-second touchdown throw from Kajiya Hollawayne to Kameron Rocha. The score going into the half was 19-14 in favor of the home team.

After halftime, the San Jacinto Tigers offense started to work the way they were designed too. Rushing to the line and catching the defense off their toes. Junior Quarterback Kajiya Hollawayne and Senior Runningback Juan Denny Jr. took turns punishing Murrieta Mesa on the ground. When they weren’t running down their throats, Kajiya was executing beautiful passes and hitting his guys in stride. They repaid him by getting tons of yards after the catch and fighting to get in the endzone. Our player of the week goes to Kajiya Hollawayne who ran for two touchdowns, and 214 yards. He also got it done through the air, throwing three touchdown passes to three different players and 234 yards. The Tigers would win the game with a final score of 39-27. Now the score could be misleading. San Jacinto’s defense did an excellent job shutting down Murrieta Mesa multiple times. However, the officiating of this game was very questionable. The refs ejected a San Jacinto player after he was on the receiving end of a push that happened after the whistle. There were a lot of unnecessary roughness/pass interference calls that shouldn’t have been called. Offsides called on the sidelines when no warnings were given. At one point penalties caused the San Jacinto Tigers offense to turn the ball over on downs after getting in the endzone two times on the same drive. Murrieta Mesa would then march down the field with the help of the referees (Half of the yards gained on the drive were from penalties) and score.

Murrieta did a great job getting into the endzone on their own; they didn’t need the extra help. In other Mountain Pass League News, West Valley lost to Temecula Valley 0-44, everyone else in the Mountain Pass League would go home as victors. Hemet beat Banning 26-0; Tahquitz beat Indio 14-13; Beaumont beat Perris 59-0, and Citrus Hill beat Pacific 48-7. A great week for the league who are all building momentum before league play begins.