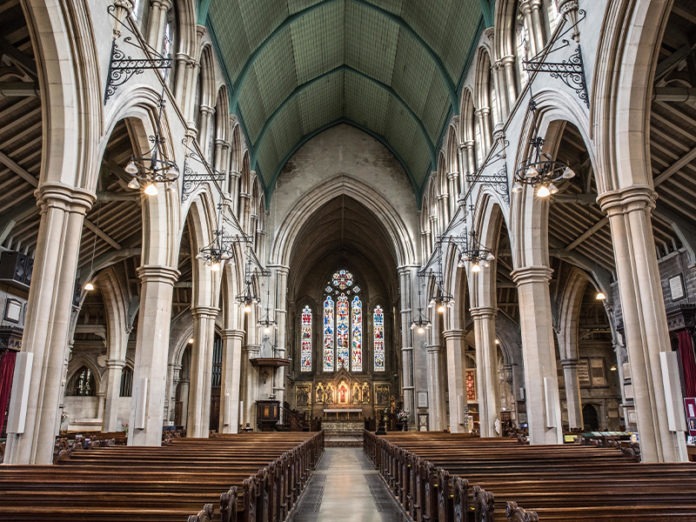 When the coronavirus forced churches to close their doors and give up Sunday collections, the Roman Catholic Diocese of Charlotte turned to the federal government’s signature small business relief program for more than $8 million.

The diocese’s headquarters, churches and schools landed the help even though they had roughly $100 million of their own cash and short-term investments available last spring, financial records show. When the cash catastrophe church leaders feared didn’t materialize, those assets topped $110 million by the summer.

“I am gratified to report the overall good financial health of the diocese despite the many difficulties presented by the Covid-19 pandemic,” Bishop Peter Jugis wrote in the diocese’s audited financial report released last fall.

As the pandemic began to unfold, scores of Catholic dioceses across the U.S. received aid through the Paycheck Protection Program while sitting on well over $10 billion in cash, short-term investments or other available funds, an Associated Press investigation has found. And despite the broad economic downturn, these assets have grown in many dioceses.

Yet even with that financial safety net, the 112 dioceses that shared their financial statements, along with the churches and schools they oversee, collected at least $1.5 billion in taxpayer-backed aid. A majority of these dioceses reported enough money on hand to cover at least six months of operating expenses, even without any new income.

The financial resources of several dioceses rivaled or exceeded those available to publicly traded companies like Shake Shack and Ruth’s Chris Steak House, whose early participation in the program triggered outrage. Federal officials responded by emphasizing the money was intended for those who lacked the cushion that cash and other liquidity provide. Many corporations returned the funds.

Overall, the nation’s nearly 200 dioceses, where bishops and cardinals govern, and other Catholic institutions received at least $3 billion. That makes the Roman Catholic Church perhaps the biggest beneficiary of the paycheck program, according to AP’s analysis of data the U.S. Small Business Administration released following a public-records lawsuit by news organizations. The agency for months had shared only partial information, making a more precise analysis impossible.

Already one of the largest federal aid efforts ever, the SBA reopened the Paycheck Protection Program last month with a new infusion of nearly $300 billion. In making the announcement, the agency’s administrator at the time, Jovita Carranza, hailed the program for serving “as an economic lifeline to millions of small businesses.”

Church officials have said their employees were as worthy of help as workers at Main Street businesses, and that without it they would have had to slash jobs and curtail their charitable mission as demand for food pantries and social services spiked. They point out the program’s rules didn’t require them to exhaust their stores of cash and other funds before applying.

But new financial statements several dozen dioceses have posted for 2020 show that their available resources remained robust or improved during the pandemic’s hard, early months. The pattern held whether a diocese was big or small, urban or rural, East or West, North or South.

In Kentucky, funds available to the Archdiocese of Louisville, its parishes and other organizations grew from at least $153 million to $157 million during the fiscal year that ended in June, AP found. Those same offices and organizations received at least $17 million in paycheck money. “The Archdiocese’s operations have not been significantly impacted by the Covid-19 outbreak,” according to its financial statement.

In Illinois, the Archdiocese of Chicago had more than $1 billion in cash and investments in its headquarters and cemetery division as of May, while the faithful continued to donate “more than expected,” according to a review by the independent ratings agency Moody’s Investors Service. Chicago’s parishes, schools and ministries accumulated at least $77 million in paycheck protection funds.

Up the interstate from Charlotte in North Carolina, the Raleigh Diocese collected at least $11 million in aid. Yet during the fiscal year that ended in June, overall offerings were down just 5% and the assets available to the diocese, its parishes and schools increased by about $21 million to more than $170 million, AP found. In another measure of fiscal health, the diocese didn’t make an emergency draw on its $10 million line of credit.

Catholic leaders in dioceses including Charlotte, Chicago, Louisville and Raleigh said their parishes and schools, like many other businesses and nonprofits, suffered financially when they closed to slow the spread of the deadly coronavirus.

Some dioceses reported that their hardest-hit churches saw income drop by 40% or more before donations began to rebound months later, and schools took hits when fundraisers were canceled and families had trouble paying tuition. As revenues fell, dioceses said, wage cuts and a few dozen layoffs were necessary in some offices.

Catholic researchers at Georgetown University who surveyed the nation’s bishops last summer found such measures weren’t frequent. In comparison, a survey by the investment bank Goldman Sachs found 42% of small business owners had cut staff or salaries, and that 33% had spent their personal savings to stay open.

Church leaders have questioned why AP focused on their faith following a story last July, when New York Cardinal Timothy Dolan wrote that reporters “invented a story when none existed and sought to bash the Church.”

By using a special exemption that the church lobbied to include in the paycheck program, Catholic entities amassed at least $3 billion — roughly the same as the combined total of recipients from the other faiths that rounded out the top five, AP found. Baptist, Lutheran, Methodist and Jewish faith-based recipients also totaled at least $3 billion. Catholics account for about a fifth of the U.S. religious population while members of Protestant and Jewish denominations are nearly half, according to the Pew Research Center.

Catholic institutions also received many times more than other major nonprofits with charitable missions and national reach, such as the United Way, Goodwill Industries and Boys & Girls Clubs of America. Overall, Catholic recipients got roughly twice as much as 40 of the largest, most well-known charities in America combined, AP found.

The complete picture is certainly even more lopsided. So many Catholic entities received help that reporters could not identify them all, even after spending hundreds of hours hand-checking tens of thousands of records in federal data.

The Vatican referred questions about the paycheck program to the United States Conference of Catholic Bishops, which said it does not speak on behalf of dioceses.

Presented with AP’s findings, bishops conference spokeswoman Chieko Noguchi responded with a broad statement that the Paycheck Protection Program was “designed to protect the jobs of Americans from all walks of life, regardless of whether they work for for-profit or nonprofit employers, faith-based or secular.”

Kyle Headlee - October 3, 2019
Pastors Brian & Nicole Hawkins are hosting an event for every member of the community to show up and network. The event is called Community Connection and is all about coming together to discuss what is going on in our community and what can we do to better it.

Susan Beckett - October 29, 2021
Many years ago, my sweet daughter Susanne and my hubby Bob got their heads together and made a video for one of Bob’s Sunday sermons. It was called, “Boiled Alive.” And yes, they actually boiled a frog at our kitchen stove - pretend! It’s amazing what you can do when you edit a video these days. The frog was not boiled, as it appeared to be - but you didn’t know that until the out-take where it showed Bob with frog in hand headed back to the pet store. Nevertheless, we got a ton of nasty emails slamming us for boiling Mr. Green Frog in the Beckett kitchen. (This video can still be viewed on youtube.com.)