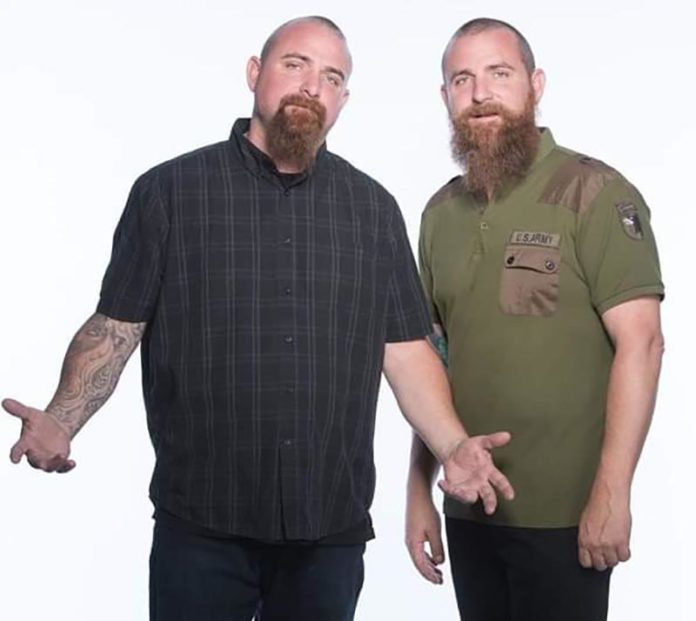 Chad and Cory, better known as The Smash Brothers comedy team, are twins and without any doubt, one of the most popular and sought after comedy due in the country today.

They still live in the Inland Empire, Chad in Highland and Cory in San Jacinto. You could easily say locals make it big.

They have appeared in 48 states and Canada and every major city and venue where comedy is welcome, including Nashville, Baltimore, Houston and Los Angeles. How, you ask, did two local kids hit it so big. Chad gives his explanation:

“I was working in the purchasing department of a plumbing wholesaler where my job was basically taking care of purchasing orders and boxed plumbing supplies all day. Cory, on the other hand, is now a 20 veteran employee for the State of California.

“We used to fool around a lot with jokes, and one day, 17 years ago, we were cutting up and making the line workers at STARBUCKS laugh. After we got out coffee, a guy came up and asked what we did for a living. Cor y, just smart mouthing said, ‘oh, we are stand up comedians.’

The guy happened to be the manager of The Improv Comedy Club in Ontario and asked if we’d like to do a show that weekend. Ever brave beyond our abilities, we both said sure.”

Chad continued. “A day later, we put enough material together to do five minutes on stage. We were not a howling sensation, but the audience gave us some applause and we were suddenly going to be dedicated stand up comedians.”

That first experience sent them off in whatever directions available for open mike availability and over time, they improved, polished their material and before long clubs began to offer them places on a bill. Before long, they were headlining shows at comedy clubs around California and beyond. They were soon headlining every comedy club in the Los Angeles area: The Comedy Store, Hollywood IMPROV, Laugh Factory and even some theaters.

Cory was still a State employee but managed to work their comedy gigs into his work schedule. Chad, however, said goodbye to hardware and never looked back.

What do they owe their success to?

“To be honest,” says Chad, “it is hard work and working as a team with Cory. There have been times when things got tough that I would have given it all up, but Cory wouldn’t let me. He always saw a bright light around every dark corner and I’m glad he did. Being twins and having each other keeps us motivated and keeps the ball rolling because this isn’t as easy as people think. Making people laugh week after week isn’t a snap. You always have to come up with new material even if some of it is on an old theme. Sometimes it is really hard to make enough money to support your family, but we’ve been tight going through divorces or whatever. We always had each other to say; we still have comedy. Let’s keep this going. We got something special.'”

Like brothers and especially twins, they have their differences. Chad admits they get on each other’s nerves on occasion, especially arguing over ideas, but it is never serious.

I pointed out that they have accumulated a reputation among some as being dirty comics and wondered how they account for the fact that women seem to eat it up — the dirtier, the louder the women in the audience scream and howl.

“Funny you should bring that up,” he says. “I guess women know we’re joking and we’re not trying to hurt anybody’s feelings. Women are our biggest fan base. I’ve noticed at our Improv Dirty Comedy Night shows they line up for hours ahead of time to grab front-row tables so they can become part of the show. They loved to be picked on and tell their friends how they are part of the show. Maybe it is because they seek recognition, but they keep on coming and giving us back what we hand out.”

They have appeared at the Derby in Hemet, and owner Jesse Vivanco tells me they have sell-out crowds and are the biggest comedy draw he ever gets.

People who go to their type of comedy or maybe all current comedy shows know what to expect and that’s why they like it. Folks that go for the first time or haven’t been in years quickly learn that the public doesn’t expect Bob Hope and Red Skeleton of days gone by.

Of course, it is well known that women get together and often say things amongst themselves just as rough.

Chad admits that audiences in different locales have different tastes. “In New England, you have to approach the audiences slowly and work up to speed whereas, in Los Angeles, they expect hardcore comedy from the beginning because that’s what they’re accustomed to. Oh, yes, we’ve bombed. Every comedian has at one time or another. I remember our first show in Las Vegas. We were on a bill with the great Ralphie Maye. It was the early dinner show at 7 p.m. on a Friday. He warned us to go easy on them. Well, we ignored his advice and went full boar. There were no boos but we faced stone silence for 20 minutes and you tell the audience couldn’t wait for us to get off the stage. Ralphie came out and said we’d make up for it on the late show because it would be a different crowd and we were well received.”

One thing he expressed that whether you do comedy, sing, or any other kind of public performance; if you don’t know your audience, you will not be successful and I would say for sure that The Smash Brothers generally have their audiences eating out of hands. If you need proof, check them out at The Derby, 2860 West Florida Avenue in Hemet on Friday Night, October 11th, Tickets at 8 p.m., Seating 8:30 p.m., show starts at 9 p.m. Just sayin’.

Contributed - May 14, 2020
Spotty is a little bit of a ham. He often has a big goofy smile on his face and is always ready to play. He adores everyone he meets and is eager to be around staff and volunteers. He absolutely loves belly rubs and enjoys a good romp at the park. He especially likes playing fetch. Overall, Spotty is a good natured and affectionate guy.

How to Save Money on Pet Care

Contributed - November 7, 2019
Owning a pet has a lot of perks, but caring for one can take its toll on your wallet. According to the ASPCA, owning a dog or cat