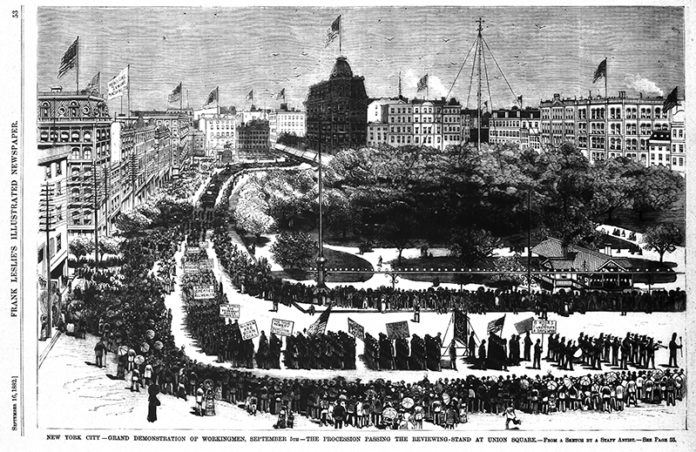 Labor Day is celebrated in the United States as a time to honor America’s labor force. We take long weekends off and enjoy our few hours away from work as though it were something guaranteed under the Constitution. Folks take it for granted today, not unlike the rights of blacks, women & gays. It is often assumed to be a constitutional right. Ever heard that freedom does not come free? Labor Day Weekend is also celebrated as the semi-official end of summer.

Everything comes at a cost. All too often that cost is paid for in brutal confrontations, beatings and murder.

Matthew Maguire, according to modern-day historians, is considered the Father of Labor Day, although for years a man named Peter McGuire took credit for the establishment of Labor Day. The confusion did not come about due to the similarity of names. Not even close. As in so many cases, Matthew’s political bent kept him in the background. Matthew was a genuine labor activist, steeped in socialist politics at a time when socialism did not share the same popularity that it does today in the United States.   He even ran for Vice-President in 1896 on the National Socialist Labor Party ticket. According to Ted Watts, a writer from Silver Springs, Maryland, “Maguire’s radical politics were unacceptable to the mainstream of American Labor and in particular to Samuel Gompers and his American Federation of Labor.”

The more moderate Peter McGuire was active in the formation of New York’s Central Labor Council and in 1887 took claim to fatherhood of the labor holiday.

Also, in 1887, five states enacted measures to establish Labor Day. In June 1894 several more states passed legislation to create a day dedicated to labor, but it wasn’t until June 28, 1894 that Congress passed a bill designating the first Monday in September as both a national Labor Day, but also as a national holiday.

After President Grover Cleveland signed the bill into law, the Patterson, New Jersey Morning Call, in an editorial stated that “the souvenir pen should go to Alderman Matthew Maguire of this city, who is the undisputed author of Labor Day as a holiday.”

Cleveland, a man who had never done anything for the working man, had dedicated his presidency toward the welfare of industrialists.

Factually, the same month he signed the Labor Day bill, at the request of George Pullman and his railroad tycoon buddies, he sent 12,000 U.S. Army troops in to smash the historic Pullman Strike as though the workers were mere parasites infecting a manged dog. Thirty workers died at the hands of his troops Eugene Debs the labor leader who led the striking employees was jailed on false charges of conspiracy and all workers participating in the strike were fired and blacklisted.

George Pullman, in 1880, founded what has come to be known as “a company town” on the outskirts of Chicago. He named it “Pullman City.” Most folks think of company towns being predominantly a tool of the coal mine owners. Not true. They were spread throughout the country.

Company towns were titled “Slavery by Another Name,” by those who lived in and survived them. Labor historians have defined them as “A model of capitalist feudalism, with workers offered housing in line with their position in the company. Where the residents were practically owned by the company owners”. According to a PBS Television Documentary they were located in remote locations: Railroad construction sites, lumber camps, coal mines and turpentine camps that existed great distances from organized cities or towns. The employer usually constructed t the towns and owned all the land and buildings, including the businesses. Churches, schools and libraries were constructed to encourage healthy communities. Saloons or other establishments that might deter production were forbidden although bootleg joints and brothels existed under cover of darkness.

Transportation was restricted to the localities’ themselves. Consequently, employees and their families were forced to shop at company stores. They were paid in scrip that had no value except in company stores that charged exorbitant prices for their goods.

Pullman’s town was notorious for such shenanigans.

Prior to the Industrial Revolution, which began to take the nation by storm in the early 1850s, even into the 1930s, workers were at the mercy of their employers. Even white-collar workers, along with hands-on blue-collar workers were often held to their employment as much as 60 and 70 hours a week. The rich got richer and the poor were kept in their place by means of economic slavery. $2 to $3 dollars a day was commonplace. Vacations among the working classes did not become a popular trend until after World War II.

Although Cleveland signed the bill sent to him from Congress establishing Labor Day as a national holiday honoring the working men and women – and even children, it was the coming together of laboring folks who, having long been held in occupation slavery, that forced the issue to a conclusion.

Pullman’s employees were required to live in Pullman City, expected to silently accept cuts in pay and not to criticize workloads. Pullman was paid for the use of the library and the congregants of churches paid rent to him for the use of the church building.

In 1893, the country was in a deep depression. Pullman factory wages were cut twenty-five percent. However, company housing costs remained high. Before long, his long-suffering workers were in debt to Pullman beyond their means to pay. All such financial obligations were deducted for paychecks.

Finally, the workers were sick and tired of such treatment and on May 11, 1894, almost four thousand Pullman workers went out on a “wildcat” strike – a strike unauthorized by the American Railroad Union (founded by Labor Unionist Eugene V. Debs). On June 26 of that same year, ARU members refused to allow trains with Pullman Cars to move with the exception of mail cars.

Pullman fought back through the railroad owners’ General Managers Association by announcing that “any switchman who refuses to move rail cars will be fired.”

Debs countered. “If any switchman is fired because he refuses to move Pullman cars, all union members will walk off the job.” By June 29, fifty thousand men had quit their jobs.

Before the melee ended the railroad workers at Blue Island yards went on an angry rampage and burned anything flammable. Thus, for the first time, a federal injunction was used to break up the strike.

Pullman, so insulted that his lowly paid workers would dare try to “steal what is mine,” that shortly before his death in 1897 he requested that his grave be lined in concrete, “to keep looters from robbing me.”

Folks, it might be well to remember, as you spend this Labor Day weekend, golfing, swimming and barbecuing in the backyard that your celebration honoring the laboring masses didn’t fall out of heaven or from the Declaration of Independence, nor even the United States Constitution. It was blood, sweat and violent deaths that give you this glorious, end of summer short vacation.  Our first minimum wage law was not enacted until June 1938. Today $15 an hour seems reasonable. On June 24, 1938, it was $0.25 an hour. The federal minimum wage today is $7.25 an hour. I guess it still pays not to be too expect too much for the giants of the industry unless you are willing to fight for it, one way or the other. Just sayin’.

Search: The history of labor day