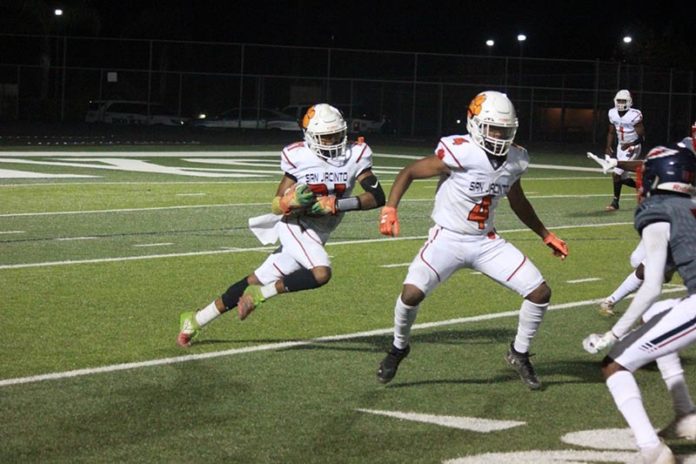 On Oct 25th the San Jacinto Tigers traveled to Citrus Hill High School to take on the Defending League Champs. Citrus Hill came into this game with only one loss on the year (against Hemet in week 6). This game was vital to San Jacinto in that they want to secure home field advantage in the playoffs.

Citrus Hills came fresh off a very tough game against West Valley, where they barely squeaked out a win. San Jacinto played Hemet in the game before this and got past them with relative ease. San Jacinto had two losses on the season (Woodrow Wilson and Eastlake).  San Jacinto won the coin toss and elected to defer until the second half. Citrus Hill was back to receive the ball. San Jacinto’s kicker Joseph Barajas launched a beautiful kick to the 20 yard line. San Jacinto’s defenders swarmed on the ball carrier and instantly brought him down.

Citrus Hill’s first drive was stopped quickly with San Jacinto forcing a 3 and out. The Tigers came out with a huge amount of energy and aggression: they asserted themselves early in the first quarter. The Defensive line had no problem getting through and applying pressure to Citrus Hill’s backfield. San Jacinto’s defensive backs did a great job shutting down their assignments and the linebackers did their job. It looked like Citrus Hill was in trouble early. San Jacinto took over the ball, but struggled to get anything going just as much as Citrus.

Both teams were in for a defensive battle and that’s the way it would be all night long. San Jacinto scored first, right before halftime, courtesy of a run by Kelvin “Boo Boo” Davis. At half time the score was 0-7 in favor of the Tigers. Citrus Hill answered San Jacinto and scored a touchdown. At the start of the fourth quarter, the game was tied 7-7. Sheldon Newton (San Jacinto’s premier defensive linemen) wasn’t going to give up so easily. Coach G called his number on offense. With the help of a beautiful pass from Kajiya Hollawayne, Sheldon gave the Tigers a seven point lead with only six minutes left to play. Citrus hill answered back and burned a ton of time off of the clock. Fans in the stands were watching a nail-biter. The score was 14-14 with only 1:34 seconds on the board, San Jacinto had to march down the field and score. Kajiya Hollawayne aired it out and launched a 50-yd bomb to one of his most reliable receivers, Kameron Rocha. Rocha elevated his body in an amazing vertical leap and snatched the ball out of mid-air.

On the very next play, Hollawayne scrambled out of the end-zone and scored, giving the Tigers a six point lead. There was only 34 second left in the game and that’s all Citrus had to try to win it. Citrus marched down to the 50-yard line without much stopping them. There was just enough time on the clock for a couple of “Hail-Mary” attempts: the first one was launched out of bounds and the second one was thrown into a sea of players from both sides. It looked like a good old-fashioned game of “3-Flags Up” until San Jacinto’s Antoine Sullivan came in “clutch,” with a huge interception to win the game, 14-20 Tigers. With this win the Tigers clinched a league title. At the very minimum it will be shared with Beaumont assuming the Tigers lose their final game of the season. However if the Tigers win or Beaumont loses then the Tigers will be the sole Mountain Pass League Champions.

Player of the Game goes to San Jacinto’s Sheldon Newton who dominated the line of scrimmage all night and caught a huge touchdown in the fourth quarter.

From Backyard courts to sell out arenas