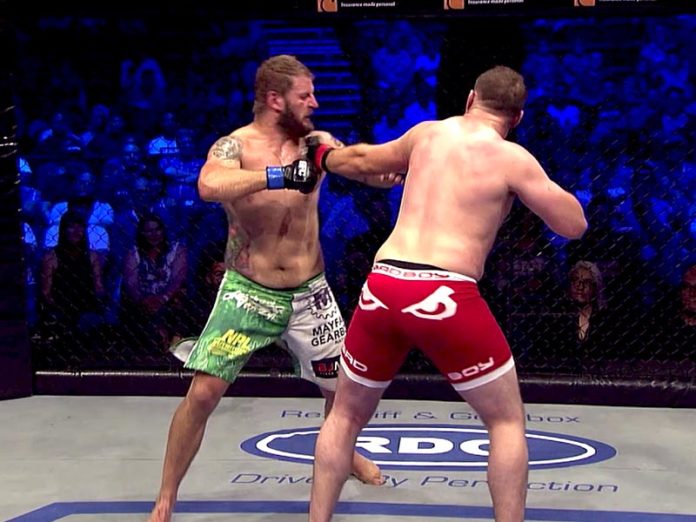 Coming In One Month: Jared Vanderaa Ready To Silence The Doubters

Two-time MMA Heavyweight Champion Jared Vanderaa is ready to step back into the cage for his next fight for Ringside Promotions at RUF-39. This fight will take place at Twin Arrows Resort & Casino in Arizona. This will be Vanderaa’s first fight in 2020. He had a late December bout last yearend is fresh off a unanimous decision victory against the very durable MMA veteran Tony Lopez. This gives Vanderaa a 10-4 overall record.

At times in his career, it seemed that Vanderaa was knocking on the UFC’s door. A couple of losses due to highly questionable decisions has somewhat put his career in limbo. Vanderaa has stayed active and is training with UFC veteran “Smilin’” Sam Alvey among many others. The judging in MMA has always been questionable. Many experts like Joe Rogan, Daniel Cormier, Chael Sonnen, Brendan Schaub, and Dominick Cruz have put to question the judges and their lack of qualifications in terms of judging MMA. Jared Vanderaa isn’t the only one who has dealt with this. It’s an epidemic that is systemically plaguing MMA.

Most recently in the UFC, at the UFC246 event, there were a total of three fights where the announcers openly questioned the decisions made by the judges. This was especially true n the main event between Jon Jones and Dominick Reyes. Many viewers had Reyes winning the fight three rounds to two, including the President/face of the UFC, Dana White, but one judge scored it 4-1 in favor of Jones. Many fighters have to overcome these obstacles and Vanderaa is just one of them. Speaking of the Jones vs Reyes fight, many don’t know that Vanderaa was one of Dominick Reyes’s main training partners for this fight. I’d say, based on Reyes’s performance against Jon Jones, Jared Vanderaa is ready for top tier opponents.

His Opponent at RUF-39 is no rookie to the game: Rich Hale has been around the block in MMA and has been fighting professionally since 2006. He stopped fighting sometime in 2014 and took a leave from the game. Hale has fought in the top organization, Bellator, ten times and has a respectable 22-7-1 record with 18 finishes. He is a dangerous boxer and submission technician. If Vanderaa could win decisively he would be on the way to turning some heads at larger organizations. Vanderaa is currently holding the heavyweight titles for two organizations: Smash Global and EFC.

If he doesn’t get the call from the UFC soon, he may have to defend one of those titles, but there are a few UFC fighters who need a rebound fight and the UFC might be looking to Vanderaa as an option. That’s not to say that he is an easy fight by any means, but he is relatively unknown to the casual viewers. Tai Tuivasa, IIiar Latifi, Juan Adams, Greg Hardy, and Jeff Hughes would all make great opponents for Vanderaa…assuming he can get the finish against Rich Hale next month.

Kyle Headlee - September 6, 2019
Jared Vanderaa took on Renan Ferreria at the Riverside Municipal Auditorium last Friday night. Legacy Fighting Alliance put on the fight; it was a heavyweight bout that was important to both men.

San Jacinto’s 3 down back

Kyle Headlee - July 20, 2019
In this week's Player Profile we introduce you to Juan Denny, Juan is a San Diego transplant who moved to San...