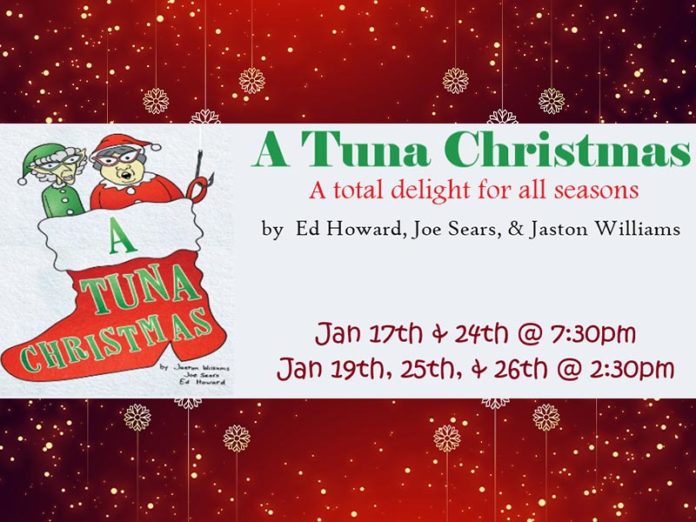 (A play to be enjoyed)

“A Tuna Christmas” promises a pleasant time of laughter

“A Tuna Christmas” belongs to a tetralogy of comedies (“Greater Tuna”, “A Tuna Christmas”, “Red, White and Tuna” and “Tuna does Vegas”) being the second in the series, written by Jaston Williams, Joe Sears and Ed Howard.

All the comedies that belong to the series are set in the fictional city of Tuna, Texas. “A Tuna Christmas” is also set in the year of 1989 and its plot focuses on the city’s annual Christmas courtyard exhibition contest, which Vera Carp won 14 times in a row. A mysterious “Christmas Phantom”, known for destroying the exhibits in the courtyard, has all the contestants very nervous. Among the secondary plots are Stanley Bumiller’s attempts to end his probation and leave Tuna, Bertha Bumiller’s fight to keep her family together at Christmas, and Joe Bob Lipsey’s fight to successfully mount his production of “A Christmas Carol” despite the city controller of the power company who threatens to turn off the lights.

The work shows us in a friendly way, the life and attitudes of people living in small towns in the south, while reflecting a fulminating satire of these same issues. What makes these works remarkable is that only two men play the complete cast, which consists of more than twenty eccentric characters of both genders and multiple ages.

This time, the Ramona Hillside Players in Hemet will present “A Tuna Christmas” directed by Frank Siebke and starring Arles Struvie as “Josh Sommers” and Thurston Wheelis as “Brad West.” It is certainly a work that no one should miss, not only to enjoy a good time, but also enriching at a cultural level.

“A Tuna Christmas” will be presented in January on 17, 19, 24, 25 and 26. There are different options for making reservations and/or buying tickets, which can be done by calling (951) 658-5300, checking online at ramonahillsideplayers.org/tickets or you can show up in person at the Box Office every Monday (Started on January 6th) from 2pm – 4pm to buy tickets with cash or check. It is important to note that there are only 95 seats available per show so purchase or reserve yours today, and do not miss out on this wonderful comedy, while you will be supporting local artistic talent.

Search: A play to be enjoyed

Pet of the Week

Contributed - August 23, 2019
Travis is such a cutie! He stands out from the crowd with his adorable scruffy fur. His sweet face will draw you in and beg you to give him a good home.