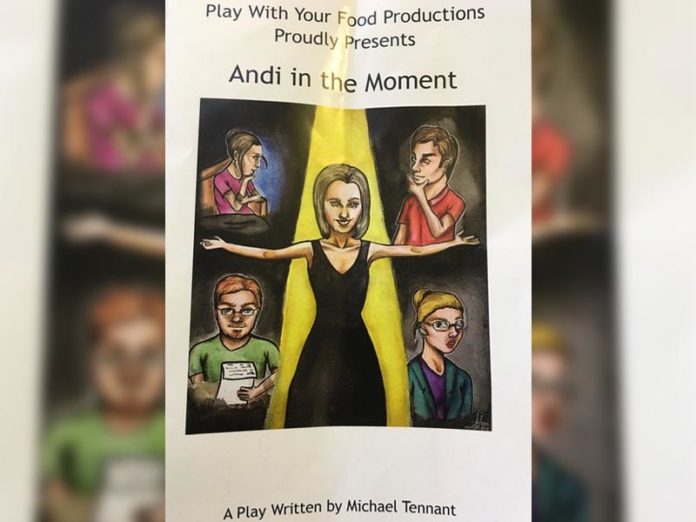 (And the star of our show is)

The star of the Play With Your Food production of, “Andi in the moment,” is producer/director/playwright/star Michael Tennant’s script

Let me start off by saying that you will not find a stronger cast in any production anywhere than as can be found in Michael Tennant’s newest offering of his Play With Your Food production of, “Andi in the moment.”

Spoiler Alert: I think the world of Tennant, though we’ve never worked together, but I have worked with every one else in the cast with the exception of relative newcomer Alexandra Miller who shines as the somewhat ditzy non-blond, Dash. Dash becomes more and more central to the proceedings as the play unfolds. Miller has an expressive face and delivers her lines more than capably. She easily gets laughs without trying, which is a wonderful skill: too many times, especially in local theater, actors “mug” upon delivery of a line, when it’s not needed. Not Miller, she’s confident in her ability and it shows.

This might sound like gloss, but it isn’t: Michael Tennant is always Michael Tennant. I’ve never seen Tennant in any production where he wasn’t solid and dependable and where he didn’t perfectly underplay when needed, and bring on the ham when needed as well. The story with Michael Tennant isn’t that he can act-that’s a given-it’s that he’s a musician, director, producer, and, as you will read later, one hell of an author and playwright.

Laura Cherland is, well, blond dynamite. With her irascible, brassy, comical New Yawkah “Carrie,” Cherland somehow manages a “Bette Davis”: the best actors and actresses can do very much with very little and Cherland manages to turn her natural beauty into Andi’s somewhat frumpy, business-savvy agent a la Bette Davis in a dozen different roles. That Cherland does so with ease is not a surprise for those of us who have worked with this incredibly talented women. One patron whispered, “She’s so beautiful, yet so…dumpy!” That’s acting ma’am…and Laura Cherland is one hell of an actress.

Levi Hand just has to be seen to be believed. Hand deftly manages to evolve as the play unfolds, yet never tips his hand (Sorry Levi, no pun intended). Hand has a way of inhabiting a part like very few actors in this valley. Hand’s personality shines through: I don’t know that it’s possible to dislike the guy unless he…I don’t know, bit your ear off…and it’s that “likeability” that sells Hand’s “William Wentworth:” you want this guy to succeed. Hand’s talent, and his vocal projection are legendary, yet, I was surprised at how easily he handles an off-beat character such as Wentworth. Hand can play comedy, drama, pathos and he can play, well…you’ll just have to see the play to find out. Hand’s speech at the end had me shaking my head: he is that believable.

But let’s talk about the soul of the play: Andi. Having worked with Alysia Albeck, I thought I knew what to expect of her in this part. I didn’t, and neither will you. Sassy, but with just enough of a hint of vulnerability, Albeck’s “Andi” is an entertainment-world-weary trooper who’s “clock is ticking,” and who is trying to make her mark in film. Suddenly, her new agent (Cherland) gets her a shot on Broadway. Albeck’s reticence at her possible turn of good fortune is fully believable when handled by Albeck. Albeck’s pitch-perfect delivery makes every line a one-liner. When she squints her eyes and screws up her face, watch out: she delivers every line with the precision of an Eve Arden or Joan Blondell at their best. She’s that good. Vulnerable when needed, sad when tested, but ready to “put up her dukes” at the drop of a hat, Albeck is Andi, and you’ll never find one better. Simply put, Alysia Albeck is as good as they come, locally or nationally.

And now to the real star. Sorry cast: it ain’t you…it’s the script. Simply put, Michael Tennant’s play is the tightest, well-written locally penned play you’re ever likely to see. Yes, the cast is superlative, but how Tennant manages to weave together a goofy young lady who’s obsessed with a TV personality, the high-brow of a London stage debut, with a somewhat stardom-desperate talented actress, together with an erudite, slightly off-kilter playwright is truly beyond me. The play sizzles with tone, pace and dialogue. You may (and only may) find some nationally written script as tight, well-paced and well-conceived as this, but you’re not going to find anything like it in this valley. Having only been in Hemet for approximately a year, I do not know Michael Tennant’s oeuvre enough to guarantee to it, but I would hazard a guess that this play is the best thing he’s ever written. You honestly must go see “Andi in the moment.” With stage management by Kimberly A.R. (the cover art seen here is by Mattea Leigh), the play is a joy. When paired with a delicious meal created and served by Stephany Borders, owner of Party Planners Catering, you simply will not have an experience like this anywhere else. Don’t miss it! Remaining show dates are January 24, 25 and 26. For tickets call 951 663-8491 or visit playwithyourfoodhemet.com

Search: And the star of our show is