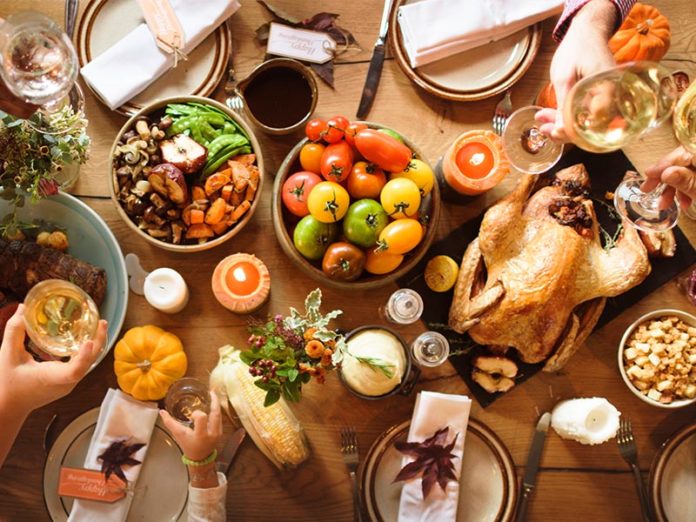 Both the United States and Canada celebrate the agricultural harvest and other blessings of our life with an annual feast day in the fall. These feast days are not only festive celebrations, but also a time to recall our responsibilities as stewards.

Thanksgiving was the first holiday celebrated by the Puritan settlers of Massachusetts. The winter of 1620 had devastated the Puritans’ colony with famine and disease. Help from the Native Americans (a Native viewpoint from 2000) and a good growing season resulted in a generous harvest in 1621, an event the colony celebrated by proclaiming a public day of thanksgiving. The three-day celebration, held after the harvest, combined two aspects of similar celebrations from England and Europe: a harvest festival and a public thanksgiving for a specific occasion of deliverance.

Many different harvest festivals were celebrated by the medieval Church. One such day was Lammas Day in England, which commemorated the harvest of grain with church services and feasting. Though the Puritan settlers did not retain Lammas Day or similar feasts, their celebration of 1621 did retain such harvest festival traditions as prayer, feasting and games. Even our contemporary celebration of Thanksgiving includes these traditions.

“Thanksgiving is a true inward acknowledgement, we applying ourselves with great reverence and loving fear with all our powers to the work that God moved us to, rejoicing and giving thanks inwardly. And so, the power of the Lord’s word enters the soul and enlivens the heart and makes us rejoice in the Lord. This is the most loving thanksgiving in God’s sight.” -Julian of Norwich

The second aspect of Thanksgiving — gratitude for a specific event — is also widespread in human experience. Indeed, such thanksgivings have given rise to the characteristic liturgies of both Judaism and Christianity, as in the Passover Seder and the Christian Eucharist. Throughout the middle ages, days of special thanksgiving were held to praise God for deliverance from famine, plague or war. This tradition was preserved by the Puritan settlers and put to its first use in the autumn of 1621.

You Are What You Wear – Kinda

Susan Beckett - November 19, 2021
We’ve all seen them - those hilarious T-shirts people wear with funny slogans - I always go away thinking how clever and creative they are. Here are just a few that have recently caught my eye: “Sorry I‘m late - I didn’t want to come.” “Sometimes I talk to myself and we both laugh.” “A fun thing to do in the morning is not talk to me.” “Patience at 1%.” And one I often wear: “To save time let’s assume I know everything!” It’s also my husbands favorite when we are out together. Not!!