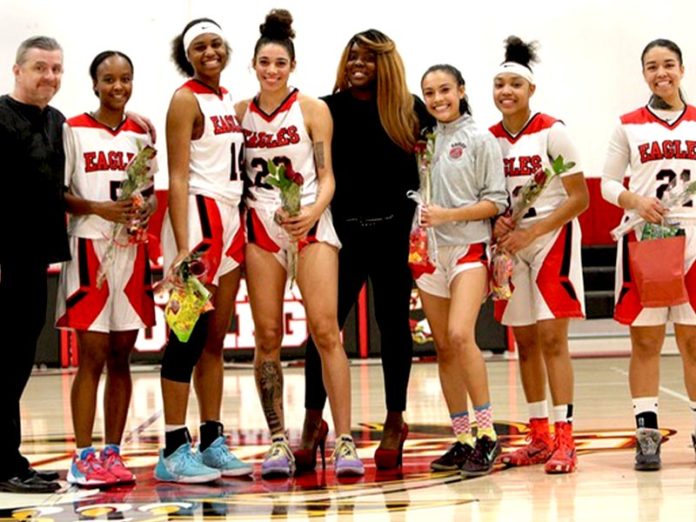 The MSJC women’s basketball team wrapped up their regular season on Friday night with 76-35 win over visiting San Bernardino to finish their conference schedule unbeaten for the second year in a row.

The Eagles battled through a competitive first quarter as they led 16-12 after one. MSJC opened up the lead to 33-19 by halftime and then out scored the Wolverines 23-6 in the third to take control of the game.

Haylei Janssens posted her 22nd double double of the season with a game high 23 points to go along with 16 rebounds, she also passed out a game high 6 assists.De’Adra Ross also had a double double as she scored 12 points and hauled in a career high 24 rebounds. Ross also blocked a season high 5 shots in the victory. Mariah Sanchez came off the bench to reach double digits with 12 points on four made three pointers.

The win was a school record 25th in a row for MSJC and wrapped up the regular season for the Eagles with an overall mark of 26-2. MSJC finished the inaugural season of the Inland Empire Athletic Conference with a perfect 12-0 record, last season the Eagles won the Pacific Coast Athletic Conference North Division with an unbeaten 8-0 mark. Friday also marked Sophomore Night for 6 Eagles. Janssens and Ross were honored prior to the game along with fellow sophomores; Keiara Barton, Janya Smith, Alyza Lopez, and Kiana Castello.

MSJC, who was ranked #3 in the latest Sports Information Directors State poll, earned the #7 seed in the CCCAA Southern California Regional play-offs. The Eagles will open the post season on Friday night Feb 28th when they host Pasadena City College at 7 pm.

Kyle Headlee - June 22, 2019
Kajiya Halloway is the Quarterback of the San Jacinto Tigers football team, As a sophomore last year he lead his team...