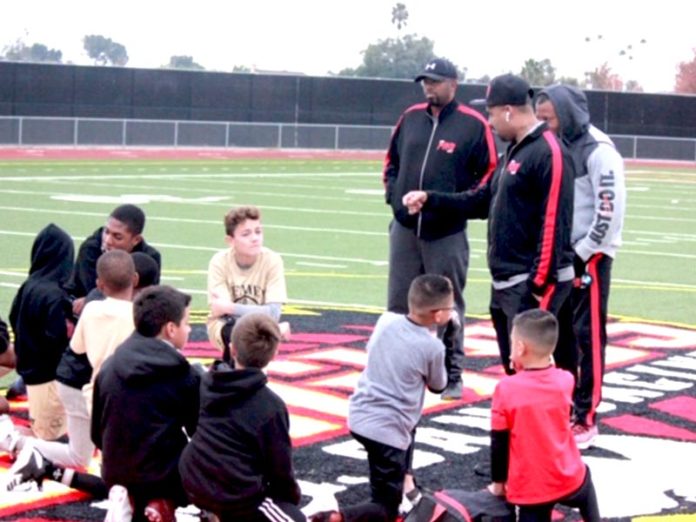 Athletes ages 8 to 18 Show Up For Free Workout

Juan Denny Sr. from Pro Way Inland Valley hosted a free football skills camp/evaluations at MSJC last weekend. Juan had two camps: one for 12-and up & 10-and up,  and one for High School kids. At the camp, there were four stations to start, testing the different speeds and agility of the kids who showed up. In the first portion of the camp, there were more than 15 kids that showed up to be tested. The kids split up into groups of five and rotated at every station. Each station tested different types of speed and agility so that the coaches running the stations could get an idea of each individual’s skill level.

All of them took the time to help the kids out, teach them new techniques and correct bad habits. You could tell that there was a nurturing energy in the air. They weren’t yelling and screaming at the kids but instead, they encouraged them. The coaches took the time to explain why they should do things differently and how it benefits them to listen to instructions so they can become the best football player possible. Coach Denny finished the camp by having the kids compete in 7-on-7 scrimmages against each other.

Later in the afternoon, Denny welcomed the high school kids in for a camp. There were some returning faces, including; Kajiya Hollawayne, Damonce Williams, Frankie Castillo, and Davon Banks. There were also some new faces. Most notable was Tanner Fye, the younger brother of Bradley Fye: Tanner will be entering his freshman season next year. Out of the gate, Tanner seems to be ready to step in and perform in a serious role. This should help his chances to crack the starting varsity lineup at Hemet High. There were kids from three of the four local high schools participating in the evaluations. They worked on speed & agility for about an hour and then separated into positions and began scrimmaging. It has been a couple of weeks since the football season ended, but you wouldn’t have known that from  the way these kids were performing.

Kajiya Hollawayne (SJHS Quarterback) looked as good as ever, making precise passes showing off his pinpoint accuracy. Damonce Williams (SJHS Wide Receiver) is still nursing some leftover soreness from the season, but showed off his notorious hands by making incredible catches. Frankie Castillo (Hemet Defensive Back/ Receiver) was shutting down receivers and daring Hollowayne to throw the ball his way. Davon Banks (San Jacinto Defensive Back) missed most of the season with a knee injury. He has barely been cleared by his doctors to start rehabbing and doing light work, yet, he looked really good. He wasn’t a step slow and showed huge amounts of confidence in his knee. The coaches wouldn’t let him participate 100% but Banks took advantage of what he was allowed to do. If his performance in the scrimmage is any indication of how he will play next season, the quarterbacks around Southern California better watch out because he is hungry to make up for missing last season.

There is still space to join the Pro Way team and get a head start in the recruiting process and training for football season. Contact Juan Denny Sr. on all of Pro Way Inland Valley’s social media for more information. There is another evaluation camp coming soon, so be on the lookout for this chance to join the Pro Way family.

Coach G gets strict as his team is running out of...

Kyle Headlee - August 9, 2019
Here we go, two weeks away from their first game at Great Oaks in Temecula. The Tigers have finally made their...