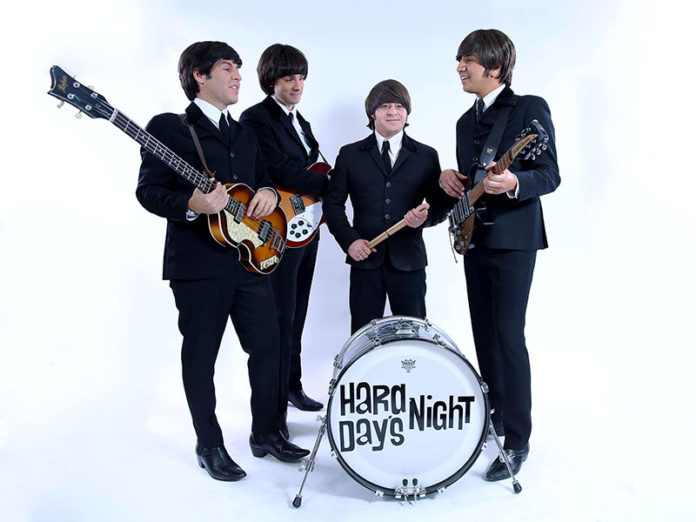 On Saturday, October 12th, the iconic music of The Beatles will be filling the air at the Historic Hemet Theater as Hard Day’s Night performs Southern California’s number one tribute to the “Fab Four.”

The Beatles are regarded as the most influential band of all time. Their sound, rooted in skiffle, beat and 1950s rock and roll, incorporated elements of classical music and traditional pop in innovative ways. They also pioneered recording techniques and explored music styles ranging from ballads and Indian music to psychedelia and hard rock. The group remains the best-selling band in history, selling over 800 million albums worldwide.

Classic tunes from the group include hits recorded together, as well as a long list of songs recorded by band members as solo artists. Top classics through the decades, include “Hey Jude,” “Let It Be,” “Yesterday,” “Twist and Shout,” “I Want To Hold Your Hand,” “Help!,” “Penny Lane,” “Ticket to Ride,” “Hard Day’s Night,” “Can’t Buy Me Love,” “Yellow Submarine” and dozens more.

The tribute by Hard Day’s Night includes costumes and music from every era of The Beatles from their introduction to America on The Ed Sullivan Show, through the decades of Abby Road, Sgt Pepper, and beyond. Tickets are still available but are moving fast.

Meanwhile, last weekend’s sold-out Tribute to The Eagles packed the house with cheering fans. The dance floor was packed to capacity as Desperado thrilled the crowd with all the classic hits. The evening’s raffle raised over $600 for the HHT Building Fund and featured a custom-designed tribute guitar donated by LocoLady Guitar.

HHT kicks off season three with tribute to Madonna