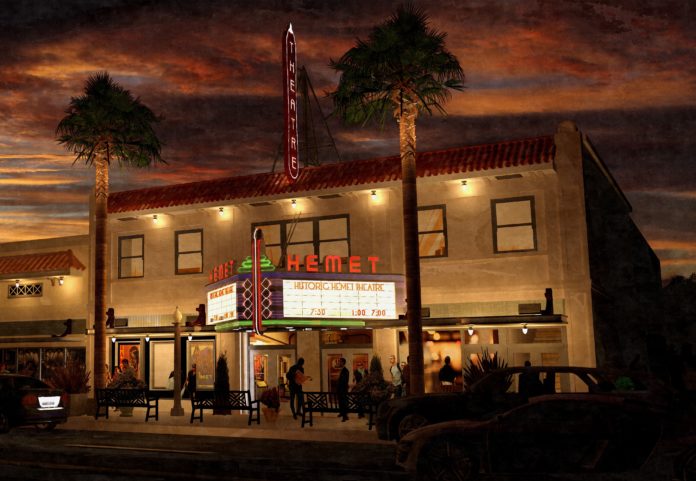 It has been just six years since the Historic Hemet Theatre took its first halting steps back to life, hoping to revive its rich history of community enrichment and service. Since then, the nonprofit foundation operating the theatre has hosted over 56,000 patrons in more than 700 events and raised over a million dollars in sales and donations.

In the year since the purchase of the building was completed, the lobby has been returned to its art deco theme of the 1930s, and the sound, lighting and projection systems have been upgraded to accommodate a wide variety of events. Yet, the surfaced has only been scratched in a project that will take much more before Hemet’s vintage movie house can reclaim its heritage as the proud centerpiece of the downtown district.

John Loomis of Thirtieth Street Architects, the man who designed the Hemet Public Library, has taken on the project, with a creative design plan for the building. Much of the project will entail updating of plumbing and electrical infrastructure, as well as bringing the facility up to modern air conditioning standards and building codes. Enlarged restrooms with handicap access is a top priority as is handicap seating in the auditorium. The exterior will include a recreation of the pointed neon marquee that majestically crowned the theatre in the 1950s

Still, much of the theatre will remain the same. The charming auditorium with the vintage art deco decor will retain its look, so nostalgic to residents that grew up watching movies amid the yellow and turquoise walls. With first time visitors, it is fun to watch their stunned reaction as they walk into the most adorable old movie house they have ever seen. Performers are blown away at the acoustics, designed for movie showings, but equally effective for live concerts.

Already, hundreds of supporters have donated to the project. Volunteers maintain the facility and provide customer service and security during events. Sponsors help finance the entertainment, keeping concert prices affordable. Businesses and residents donate gift baskets that are raffled to raise money for the building fund. Members of the “Century Club” will have their names permanently enshrined in the lobby, honoring their contributions to the future of the Historic Hemet Theatre. Dozens of local groups have made donations to the cause.

In just a couple of years, HHT will turn 100 years old. The foundation is hopeful that a major portion of the renovation can be accomplished by then. Businesses and individuals that would like to support the project, can contact the Ticket Office.

Susan Carrier - November 21, 2019
The latest season of Tribute Mania at the Historic Hemet Theatre wraps up on December 7th with a Tribute to Styx by "Rockin' The Paradise."