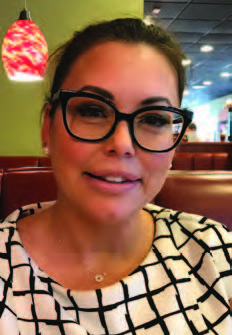 When one is considered for any plaudit as being applauded for dedication to service in the community, it is usually a person over fifty.  Corrine Awad defies all of those presumptions.  At 42 (she looks about 25) she has packed in a lot of merits and obligations.

“I was a military brat,” she says, “but my older sister suffered most of military life.   I came along later in my father’s career in the United States Air Force.”

Born at the military hospital at Dover, Delaware Air Force base, she later went with her family when her father was transferred to a base in Germany.  However, she spent most of her growing up years in Moreno Valley.

“I went to a few different elementary and high schools, but graduated from March Mountain High School in Moreno Valley.  I later attended Mount San Jacinto Community College in San Jacinto, where I now live with my husband and five children.”

One of her first jobs was with work-study through the college which prepared her for a future in office-related duties.

“I worked full time while attending Azusa Pacific University, where I received my Bachelor’s degree in organizational leadership.”

She wanted more, however, and in 2016 entered a program at California Baptist University and received a Master’s Degree in public administration.  With all this time preparing herself for the future, she managed to get married and produce a family of four daughters and a son. “My son came between daughters.  Two older and two younger and he turned out pretty good considering all the attention he received from all the females in the home.”

She currently holds a position as a government affairs officer for the Department of Waste Resources for the County of Riverside.

“We run all the landfills for Riverside County and manage many programs that allows me to be integrated into many communities – for instance, outreach and educational programs to promote reuse and recycling, which offers different classes like composting and information regarding recycling and where it goes and how it is put to use.”

She works a great deal with municipal advisory councils.   It is amazing all the good that comes from what most of us would consider trash.  So much of recycled materials become useful in so many ways and does not end up in a landfill.

“My duties take throughout Riverside County.  In fact, this morning, I met with civic leaders down in the desert on some specified programs.”

Her first real exposure to what came to be her first love was when she went to work with former Third District Supervisor Jeff Stone of Riverside County.

“It was a dream position.  I was a legislative assistant in Mr. Stone’s office for ten years, which opened up a wonderful avenue of personal service to the constituents of the Third District.” She would also work for Supervisor Tavilogne in the Second District.

“I never realized just how much I was doing and how important my job was until later on.  I always considered myself as just another piece of the puzzle, connecting people, bringing folks together.  It is not always something coming from me, but I’m able to work with people that I’ve met through the Supervisor’s office.”

She believes that her mission is in helping people who are suffering from red tape or not knowing where to go for assistance.

“I love figuring out how we can help someone or getting problems solved.  I have been involved with the Homeless Outreach Team.  In one instance, I helped obtain grants to provide for Second District homeless.”

In February of this year, she was appointed to the San Jacinto Planning Commission.  She is somewhat shy about her contributions and usually refers to them as “learning experiences.” She is far more than just a student. “I have always enjoyed helping others.  Much of my after-hours time is dedicated to meetings and assistance to others.”

She considers any new obligations as “another opportunity to work for my city and being involved with my community beyond a normal 8 hour day at the office.   I look forward to helping the Planning Commission in making good decisions and being of assistance wherever I can.”

A few years ago she was intimately involved when the county shut down the notoriously inadequate Crossroad Encampment in the hills south of Hemet.

“People were living in horrible conditions where it was unsafe and unsavory.  We provided wrap-around services to those living there.  The entire camp was broken up, and my job was to help make sure they were receiving services, not being displaced with nowhere to go.  We made sure they had new shelter and counseling.”

She spent a lot of her time with the Supervisor’s constituents, visiting senior home parks and making sure they were receiving proper services from the county.

“My thing, personally, is that I like to help; giving back to the community that has been so generous with my family and me.  I come to realize that I was in a position to assist others and I didn’t want to lose that opportunity.  It has always given me a sense of purpose., a sense of reward that monetary compensation does not; especially in such a large county system where people are all too often not sure where to go for help.  Maybe they’re getting a run-around or not being given the right answers.  That, then, becomes my job.

“When I would have calls referred to or get them directly would say, ‘I don’t want you to call anyone else.  Let me figure out where you need to go.’ I didn’t want them to have to wait or keep going back and forth.  I wanted to do the leg work for them.  Jeff would say, ‘Take care of their problem and I would.”

That was not only her job, but she was anxious to take on the most difficult cases, “because I could.”

As if she didn’t have enough on her palate, in 2017 she accepted an appointment to the Riverside County Parks Historical Commission from Supervisor Chuck Washington.

“I believe that the significance of preserving history and historical sites will help in retaining distinctive regional culture, community unity and understanding of how important it is to preserve our land.”

She is assisting in the planning of the 100th year anniversary of county parks.  The first county park was in Idyllwild and I’ll bet very few citizens of the county today knew that.

How many of us would like to, or be able to, tray working, volunteering, raising five children with ages ranging from 6 to 26 attending all phases of schooling, plus a husband working full time.  For a lady who considers herself just a part of the puzzle, I’m saying that where I come from she’d be considered the puzzle, not just part of it.  It is our privilege to call Corinne Awad a local PROFILE IN SERVICE.  Just sayin’

Kyle Headlee - September 26, 2019
DP City Church C3 (27100 Girard Street) hosted an event for the men of Hemet and San Jacinto. The tickets were very fair and the event only cost five dollars which is a bargain when you consider everything that was included.

War Vets Without Diplomas Have Less Than One Month to Apply

Contributed - September 16, 2019
RIVERSIDE (CNS) - War Vets of foreign wars who didn't graduate fromhigh school have until Oct. 15 to apply for...