The Soboba Fire Department recently added a new vehicle to its fleet, and it has already proven to be a perfect fit. Chief Glenn Patterson said he recognized the need for a patrol truck and once funding became available, he was able to start the search.

Fire Captain Howard Maxcy Jr. is one two tenured Fire Captains assigned apparatus specification duties. It took only about three weeks for Maxcy to find a vehicle that met the department’s requirements and was readily available.

The Firematic patrol wildland fire apparatus has a Ford F-550 XL chassis, a 4×4 drive train and a 5-speed electric overdrive transmission. The rear pumper tank can hold 250 gallons of water. This truck marks the fourth piece of fire apparatus the department now has at its disposal. It also maintains its Engine 1, Brush Engine and a Tractor-Driven Truck also known as a Tiller Truck.

“It’s basically a light fire engine,” Patterson said of the newest addition. “It has all the basic tools for firefighters but was built for off road, tight spaces and short turnarounds which is perfect for some of the outlying areas of the reservation. It’s much narrower than our other trucks and is only meant to carry two or three people so it gives captains the option of taking it instead of the ladder truck when appropriate.”

The new truck has been in service since early August and has already been used for several incidents. The department has been consistently busy since early summer helping with wildfires throughout the state as part of its mutual aid agreement.

“California has a very intricate mutual aid system,” Patterson said. “Soboba responds to mutual aid when requests come into the Operational Area (Riverside County). Dispatch looks at who can send what and we base our availability on vacation schedules, training assignments and our daily staffing.”

The request can be for personnel or equipment and Soboba Fire Department has sent several crew members out on overhead assignments in recent months. The incident determines the need and the chief can call back his firefighters at any time, should it become necessary. The usual assignment is two to three weeks. This year alone, engines have been dispatched to the counties of San Bernardino, Mariposa, Napa, Santa Cruz and most recently to Orange County on October 26.

“Being a one-station department, you have to provide into the system to get help from others when you need it,” Patterson said.

He said sometimes an engine is left at a site and the people are replaced based on evaluations done at the 14- and 21-day marks. For a major incident it can be a 12- or 24-hour shift.

“I think you get used to it,” Fire Captain Jacob Briones said. “A couple of times I was involved with an initial attack which was 36 hours straight. With those, you get pretty worn out. The main thing is to stay hydrated and rest, which is what we all learned in training.”

Something else that kept the department busy in August and September was its work on the large-scale Wildland Urban Interface (WUI) project on the reservation. Working closely with members of Soboba’s Public Works Department Canyon Crew, fuel breaks were created to prevent any wildland fire from encroaching onto the reservation.

“The objective for this project was to create a contingency fire break between the primary CalFire dozer line and houses located on the west/northwest side of reservation,” Fire Captain Roger Salmo said. “We also created a 100-ft. defensible space around the houses that are in the most fire danger.”

The first phase has been completed and although it doesn’t stop a fire, Patterson said it gives them a little extra confidence because of the fuel break. He said the project can be completed next year if funding is received from the BIA (Bureau of Indian Affairs).

The department has been fortunate to not be negatively impacted by the COVID-19 pandemic.

“We’ve been diligent, and no one has been affected by it here,” Patterson said. “We get tested if we have been potentially exposed but so far it’s had a minor effect on our staff.”

Early on, the department adopted a COVID response plan outlining the personal protective equipment (PPE) necessary on every call. All staff have been following suit with the Riverside County EMS Agency protocols.

Since Patterson became fire chief in 2019, he said he has been able to implement a lot of efficiencies that have improved operations for the department, from electronic scheduling to paycheck parity.

“I’m glad we have the support of Soboba Tribal Council to help with all our needs,” Patterson said.

Contributed - December 10, 2020
UC Riverside will lead a multi-campus consortium tasked with researching the origins of COVID-19, which might ultimately lead to methods of stopping its propagation, it was announced Wednesday. 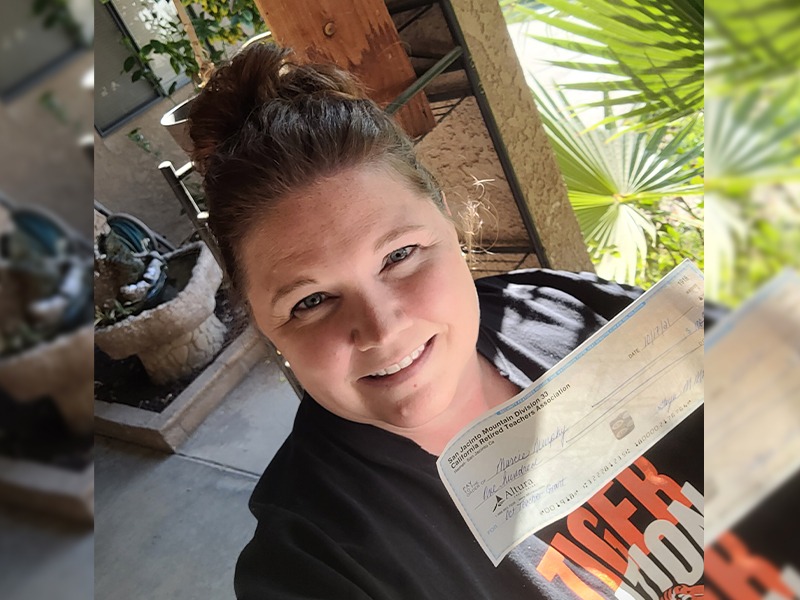 Contributed - November 5, 2021
Fulfilling its mission to “support public education in our communities,” the State California Retired Teachers Association awarded 40 $100 teacher grants to California public school teachers – including two local educators – randomly selected from over 40,000 applicants in their recent October drawing. Amanda Weden, a fifth-grade teacher at Taawila Elementary School in Menifee, and Tahquitz High School Special Education teacher, Odalmy Cecala, were announced as grant recipients. As an added bonus, both teachers also received a matching $100 from CalRTA Division 33, for a total of $200 each to use in their classrooms. Weden plans to use the $200 to buy supplemental materials to help her students with hands-on classroom experiences. Ms. Cecala says the $200 will go a long way in purchasing sensory equipment for her many Special Education students. The next CalRTA statewide teacher grant drawing will be held in March, with online entry forms available between February 16, 2022 and March 9, 2022. To access the entry form, go to www.calrta.org/teacher-grants or check out CalRTA’s Facebook page: www.facebook.com/CalRTA.