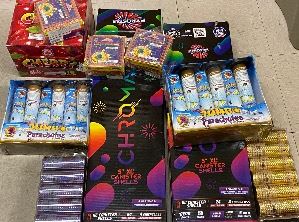 LOS ANGELES (AP) — A Southern California official is seeking federal help in stopping an influx of illegal fireworks that has fueled use of skyrockets and firecrackers well beyond July 4 and led to the deadly explosion of a cache in the middle of a neighborhood this year.

The letters emphasized the potential for wildfires in drought-stricken California.

“Because illegal fireworks are smuggled from outside California, our federal partners are in a unique position to help local jurisdictions combat the influx of fireworks contraband,” Barger said in a statement.

Use of illegal fireworks has surged beyond the Fourth of July. Celebrations of sports championships unleash barrages of aerial shells, and fireworks are set off for just about any kind of celebration any time of year.

On March 16, an illegal stockpile of fireworks blew up in the city of Ontario, east of Los Angeles, killing two men and forcing evacuation of a wide area so that unexploded items could be gathered and destroyed.

California law allows so-called “Safe & Sane” fireworks, but many local jurisdictions ban them and urge residents to report any they see.