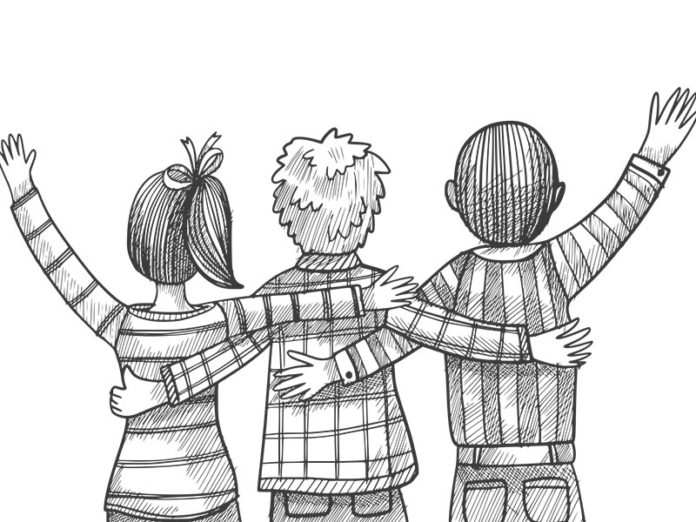 “To have a friend you must first be a friend.”

It is hard to imagine anyone without friends, and yet there are perhaps millions of individuals who long so much for a friend but go through life friendless. You might ask, “How could that be possible? I have loads of friends.” It would never occur to you that anyone might be friendless.

Recently a young college student went berserk in Isla Vista California, killing three roommates and two total strangers before dying from a bullet to the head – fired from his own gun. Judgment calls were swift, but the root cause was all over the map. His accusers were spouting dozens of condemnations and opinions – but no one seemed to be much interested in knowing why this handsome young man was so lonesome and lonely, and feeling so rejected by his society that he simply lost the essence of being human. He committed an horrendous act and deserved accountability. He told the world over the internet that he was unliked and had no friends – not even a girl friend.

He was young and good looking, came from an affluent family with all the advantages of a male heir to wealth.

One might expect that his family’s status in the community would bring him more friends than he would want. Yet, he claimed to have none.

Pick up the paper any day of the week or turn on the television and somewhere in the United States you will read or hear of someone who felt so much rejection by his or her fellow humans that they committed suicide and all too often took others with them in the process.

Many of those same desperate persons end up in prison or mental hospitals or, as in this case, the grave.

Have you offered friendship? . Reaching out to someone who seems to have everything or nothing is one of the greatest gifts of living. You can never have too many friends. How many times have you heard someone say, “I could count all my friends on less than two or three fingers.”?

Citing an interview I had some years ago. To save him embarrassment, we’ll call him James.

“ As a child I was never part of the “in” crowd at play or in school.”

Too small or frail, or both, to play sports and even when chosen in a game of street baseball or tag football he was always a last resort when they couldn’t find anyone else. He couldn’t hit a baseball and couldn’t catch. Whomever ran the team would always place him out of the way in left field, and even there he spent most of his time chasing balls to the fence while the opposite team scored run after run. Nobody really wanted him on their team. He simply did not fit in.

Same thing with football, only with football there was legitimate cause to not want him. The most common excuse they gave was, “You’ll get hurt. This ain’t no game for sissies.” That was his life in athletics, what there was of it, throughout elementary and junior high school. In high school he simply ignored sports.

On the other hand, his sister excelled at softball, basketball, track and volley ball. People were quick to make the comparison. “Too bad James turned out to be a boy and Agnes a girl. Should have been the other way around.”

His athletic problems followed him into the social world. Consequently, he had very few male friends. Shy at parties, he was a total washout with girls. Once, a neighborhood girl that he had a crush on went away to visit her grandmother for two weeks during the summer. He really missed her and moped around the house like a sick puppy during her absence. He liked her because he could talk to her and she listened. All through his developing years he related better to females than males. Male bonding was Greek, and had no idea what his uncle meant when he said, “Why don’t you hang out with the guys: Learn to be a man.” Not understanding what his uncle meant, he became embarrassed and resentful.

Kids can be vicious, adults worse. One learns to live with what his or her own age group says and shrugs it off. There’s little choice since you’re with them until graduation from high school. College doesn’t count in the equation. That’s another world.

He recalled a time when one of his mother’s friends asked her, “What’s wrong with Jimmy? He’s nothing like the other kids. Maybe you should see a doctor.”

His mother’s stock reply, “There’s nothing wrong with him. He’s just a kid. He’ll grow out of it.”

He got so sick and tired of hearing that phrase, ‘He’ll grow out of it?” What were they talking about. Why would he grow out of himself?

His first realization that he might have some value came in tenth grade. The English teacher asked him to join the debating club. That appealed to him. His father often accused him of “talking too much about things you don’t know anything about.” He might not be able to catch a ball, but sure knew how to flap his lips. His English teacher was the first adult to take an interest in him. Probably five feet in high heels, she coached and encouraged him until he became good at proving a point. He learned to take either side of an argument. “Master your topic so that you can knock one out of the park,” she told him..

Taking on the least interesting side of a subject, he worked like a drudge to learn everything about we shouldn’t pick on anyone weaker than ourselves. He said, “I picked the rodent’s defense in a debate.”

His closing argument ended with, “Be careful how you treat the lowly of the lowliest, because even a rat will defend itself when cornered.”

The instructor later made a big to do before the class about everything having a use and everyone being useful at something. When the panel of judges awarded James the blue ribbon it felt that maybe he might have a chance in life, after all.

Winning that debate set him to taking on all kinds of challenges:. Sports were out of the question, but words were like angels coming down from heaven to lift him up.

During our interview he said, “I often wonder if my peers and others hadn’t brow-beat me so much and made fun of me the way they did, would I have ever snapped out of ‘it,’ whatever ‘it’ is. I’m sure I would not have chosen sports writing as a career.

He is and has been one of the top sports writers in the country. As Paul Harvey ended his radio shows, “and now you know the rest of the story.”

Today it is fashionable to wear glasses. Forty or fifty years ago, to a kid glasses were like a fatal disease. “Four eyes,” is one of the cruelest expressions in the English language. At one time a kid had to be almost blind before a parent could get him fitted for “spectacles.” There were no contact lenses or ocular implants – just “coke bottle” thick lens with black or wire frames. Only “old” people wore them and only the oldest wore “wires,” as they were called.

It pleases me now, since I’ve run the gamut with eye lenses, that I never made fun of kids wearing glasses. Same thing with overweight kids. Back in the day, as the kids too young to have had a back in the day experience say, adults plied you with starchy foods if you looked an ounce not fat enough. “He looks poorly,” or “don’t eat enough to keep a cat alive.” “Why he’s as skinny as a rail.”

When a kid feels like a mis-fit as a teenager, it seemed logical that associate were also considered mis-fits. One chubby boy, with zits and big ears fell into that category. He had no such mis-fit friends. Went all the way into maturity alone. He was judged by his over-sized ears that jutted out the sides of his head like those of a pig. He garnered the nick-name of“pig ears.” Classmates l laughed about it. He answered to “Pig Ears.” On the surface he appeared not to care. However he dreaded leaving the morning. He had no friends, but took up with another boy whose eyes were crossed. Neither of them had any other friends. They were automatically drawn towards each other, as much for survival as for companionship.

The two were always together, sharing each other’s secrets and went to each other’s homes as though they were their own. Classmates referred to them as “Pig Ears and Loony Tunes.” One afternoon after school at one of their homes while they were working on a jig-saw puzzle at the dining room table. The rain came down in torrents, tapping out a wet symphony on the tin roof. From out of nowhere, he looked up from the table with tears in his eyes and asked, “Does it ever bother you when guys call you Looney Tunes?”

The other boy sort of shrugged his shoulders in a non-committal movement and said, “I don’t know. I never thought about it. Why?”

The teardrops began to stream down his cheeks. “It bothers me. It hurts when people call me Pig Ears. My name is Paul.”

Until that very moment he hadn’t the boy’s name, allowing himself to follow the crowd, even though the crowd had nothing to do with either of them. . They remained friends until the day Paul died in the Korean War. He never again spoke of Paul as Pig Ears, Not to anyone.

The last letter he received from Paul before he went overseas, began with “Dear James,” not “Dear Looney Tunes.” Both boys were tossed onto the ash pile by the cliques around them. Paul gave up his life as a doctor in Korea. James, an industrial engineer. Each had at least one friend.

During the big band hey days, the Mills Brothers, a black quartet who were really brothers, had a hit record, “You Always Hurt The One You Love.”

Do you ever say hurtful things to someone who might want to be your friend, but can’t reach you because you didn’t think them worthy?

shining, but they sure are wonderful to have in a rainstorm.

Rusty Strait - April 30, 2020
The 1968 Republican Convention preceded the Democratic fiasco in Chicago a week or two later. However, in some ways, it was an omen