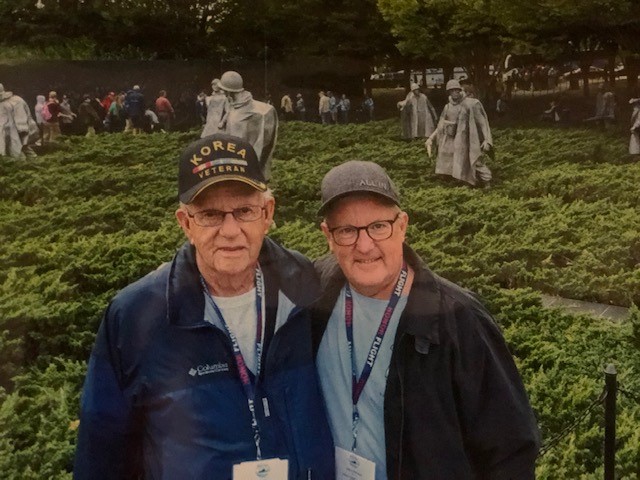 “They fought together as brothers in arms; they died together and now they sleep side by side. To them we have a solemn obligation.”   –  Admiral Chester W. Nimitz

The Honor Flight Network was co-founded by Earl Morse, the son of a Korean and Vietnam War veteran, and Jeff Miller, a small business owner and son of a WWII veteran. In February of 2007, Morse and Miller met in Washington, D.C. at the first “Summit” and merged Honor Flight and Honor Air into what is now known as the Honor Flight Network. By 2017, there were 140 Honor Flight Network regional hubs across the United States. Now, HFN is escorting WWII, Korean War, and Vietnam War veterans to see their memorials in Washington, D.C. At the end of the 2017 flying season, the network had escorted over 200,000 veterans to their memorials, free of cost to the veterans.

The Honor Flight San Diego is a non-profit team of volunteers dedicated to escorting San Diego County veterans to Washington, D.C. to visit and reflect at the memorials dedicated to their service and sacrifice. According to the Department of Veterans Affairs, an estimated 640 WWII veterans die each day. Time is running out to express our thanks to these brave men and women who served.

For Russell, the experience was a roller coaster of emotions. He shares a moment as he returns to San Diego:

“As we deplaned and entered the concourse and descended the escalator, we were welcomed by a crowd of about a thousand people, families and friends. Coast Guard, Marine and Navy Color Guards and groups of kids in school uniforms, scout troops, everyone waving flags and shouting welcomes. It was loud and wonderful! A young girl with a truly powerful voice sang patriotic songs. Grannies in wheelchairs, husky guys with kids on their shoulders and young mothers with babes in arms, hugs and kisses and fist pumps all around. It was beyond belief, just stunning.”

For Mark, he was accompanied by his son, Bryce. Bryce served as his ‘guardian’ during the trip. One incident stood out to Mark and he shared his thoughts:

“As my son, Bryce and I stood at the Marine Memorial, I asked a man if he’d kindly take a photograph of my son and I in front of the memorial. He was visiting the memorial with his family. The man said he’d be happy to take our photo. Then, after he captured the moment for us, he said, “May I ask a favor from you?” I said, “Of course.” He wanted me to take a photo with his 16-year-old son. It struck me as so respectful and kind that his young son wanted a photo of us together. It made my heart feel good to know that there are young people who respect those who served to protect our freedom.”

Shared stories, meeting new friends and experiencing the fellowship of military service to our country; these stories are repeated by many veterans who participate in an Honor Flight trip. From Wisconsin’s Stars and Stripes Honor Flight, President Paula Nelson mentioned in an article in the Milwaukee Sentinel, “We hear from our veterans often that an Honor Flight experience rivals their wedding day and the birth of their children, so we’re looking forward to giving these deserving veterans another special day.” In that same article, Milwaukee sports broadcaster, Steve Novak relayed a chance encounter from a 95-year-old veteran and former prisoner of war who had been on a previous Honor Flight. “I just can’t wait to spend more time with the guys here and hear more stories. Just talking with them, you realize why we say, ‘I’m so proud to be an American.’ “

Earlier this year, another Village Veteran, Marv Nottingham took the Honor Flight and had an unforgettable experience. He visited the Marine Corps War Memorial which is dedicated to all U.S. Marine Corps personnel who died in defense of the United States since 1775. It was an emotional moment. Having served in the United States Navy, Marv worked as a bulldozer operator for the 133rd Seabee Battalion. The group was attached to the 4th Marine Division. In January 1945 the Battalion was shipped to Iwo Jima. On D-Day, February 19th, 1945, the 18-year old Marv and his Seabee Battalion were put ashore with the task of clearing debris from the beach. Marv’s Battalion suffered 42% casualties from Japanese mortars. Marv was awarded the Bronze Star for valor.

In the Spring of 2008, Senator Bob Dole nominated both Earl Morse and Jeff Miller for the prestigious Presidential Citizens Medal. The medal was awarded to Morse and Miller by President George W. Bush in the Oval Office in December of 2008. The Honor Flight Network is a 501(c)(3) nonprofit organization. If you want to help support this amazing organization, your donation will enable the Honor Flight Network to continue its mission to transport our nation’s veterans to Washington, D.C. to visit their memorials. Currently, the Honor Flight Network is serving veterans from WWII, the Korean War and Vietnam era veterans.

We salute Russell, Mark and Marv our Village Veterans and all who have served and sacrificed for our country and to protect our freedom. Thank you for your service.

Here is a link to the Honor Flight Network to learn more: www.honorflight.org

The Village, an active 60+ Life Plan Community that offers three levels of care within the same campus. Active Independent Living that includes a variety of exceptional services and amenities in a secure gated campus. The Village HealthCare Center, which is open to the public, offers 24-Hour care and nursing staff which includes skilled nursing and assisted living services. Live your life your way today with a secure plan that includes a Guarantee of Care and Services for Life!

Rusty Strait - July 27, 2019
If you drive on Florida Avenue any time of the day or night, you are placing both your life and insurance...

Rusty Strait - November 28, 2019
This is the time of the year when Santa Claus pops up on every street corner, advertisement and fundraiser