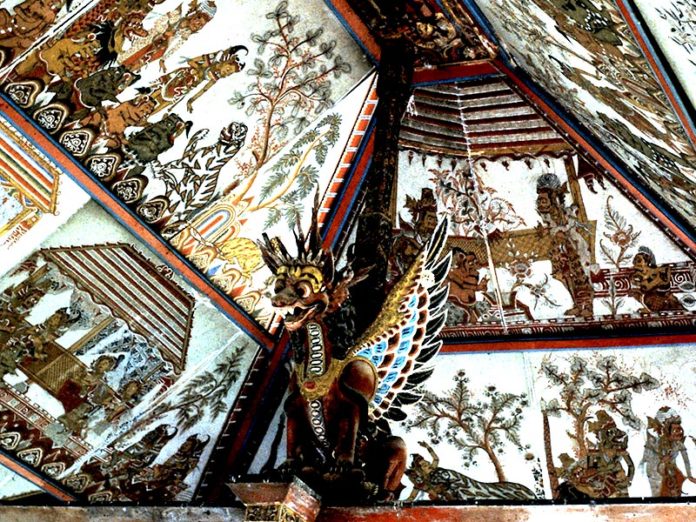 (The Royal Court of Justice)

One Saturday, my husband Lloyd and I received a brochure about a two-week cruise on the venerable “Ocean Pearl,” leisurely cruising throughout South East Asia, with all sightseeing tours included. On Monday, we went to the Automobile Club to book a cabin and found out that there was only one cabin left, way up in the bow. Certainly not what we ever would choose, but it was the only cabin left, so we booked it, and this cruise was one of the best cruises we ever went on.

The “Ocean Pearl” is based in the Orient year-round, is a 12,475 gross-registered-ton ship, and is sailing at her full capacity of 450 passengers, half of which are from California. The staff and crew are European and Filipino. We visited numerous wonderful places, in the world’s largest island country with over 17,000 islands, Indonesia (visiting Bali, Borobudur, and Jakarta); Thailand (Bangkok); Singapore; and Malaysia.

While touring Indonesia, one of our many visitations wasKlungkung, the former capital of Bali, also known as Semarapura, the highest seat of the old Balinese kings. Their kings and noblemen established drama, paintings, fine arts, dance and music, and centers for other arts, that still thrive today.

A prince that moved to Klungkung in 1686 erected a palace which was designed like a square. With about 150 meters on all four sides, the palace was built according to unchanging structural designs. The Palace, to the best of my knowledge, was to become the Klungkung Palace, officially Puri Agung Semarapura, and is part of the Pura Semarapura Royal Palace complex, which also is called the Semarapura Palace complex, and is one part of three edifices. The second structure is the Kerta Gosa, also called the Royal Court of Justice of Klungkung, Kerta Gosa Klungkung, Bali’s Royal Heritage Site for Jurisdiction, the Hall of Justice Pavilion, and the Hall of Justice. The third one is the main gate that has the date of 1622. Within the old Palace compound is a Floating Pavilion, the Bale Kembang.

One of the main highlights of Bali, the well-known Grand Hall of the Kerta Gosa, dates to1686. This former Royal Court of Justice is a delightful place of archeological importance, erected on a small island, in a courtyard of ponds, beautifully situated within its moat (which was built for beauty and not for defense). The Floating Pavilion was also decorated and used by the attending royal family.

The earliest Hall of Justice Pavilionin Semarapura, served as a court during the Dutch occupancy in Klungkung (1908-1960), and that is how it got the nickname “hall of justice.” This part of the Pura Semarapura Royal Palace complex was constructed by the end of the 17th century. Kerta Gosa used to be where the Royal family carried out religious ritualsand it became a court during the Dutch occupancy.

Featuring themes from old Javanese literary classics, scenes are usually inspired by notable Hindu epics such as “Ramayana” and “Mahabharata.” The epic “Mahabharata” tells ofBhima Swarga, whose mother tells him to “rescue the souls of his father and second mother from Hell, and to escort them to Heaven.” Along with Bhima, two servants (included in numerous “Mahabharata” stories), are the heroes.

The Kerta Gosa, a historical landmark, is famous for itspaintings of themed stories, divided into terraced rows that cover the whole ceiling. Beautifully decorated scenes elevate the innocent, and show the beauty of Heaven, and the enticements given to the virtuous. Most of the paintings tell of spiritual teachings, each section revealing a different tale, from karma and reincarnation, to stages of human life, from birth to death, and the journey of life towards Nirvana. The ceiling’s puppet paintings are to educate through stories, presenting consequences of good and bad actions executed during their life.

Lloyd and I found the Kerta Gosa to be a remarkable example of the Klungkung style of painting and architecture. On the exquisitely adorned ceiling, we saw the Kamasan style of painting, a style particular to the region. Two kilometers south is Klungkung’s village of Kamasan, which is the current center of the waying-style painters. Occasionally called the Kamasan, it portrays the traditional Balinese shadow puppets.

Other rather lurid paintings show the harshsentences for criminals in the afterlife. Facing those standing judgment, these frightening paintings show the tough sentences a law breaker going to Hell can anticipate in the afterlife. While waiting for their sentencing, convicts viewed the ceiling, depicting diverse punishments they could get if they have not led a good life.

The King of Klungkung gave out his variouspunishmentsin thismagnificently adornedHall of Justice. Kertha Gosa, the Supreme Court of Bali, acquired cases for severe crimes that could not be solved elsewhere, and so were reassigned here. Three Brahmana priests, performing as austere judges, were notorious for their severesentences.

The paintings probably were originally made in the middle of the 19th century and renewed a few times. Restoration of the Kerta Gosa Klungkung (Bali’s Royal Heritage Site for Jurisdiction) was in 1960, with individual panels being repaired in the 1980’s and 1990’s, the latest restoration (that I know of) being in 2014. Paintings, originally on textiles, were shifted to fibrous cement sheets. Open to the elements, being in an open hall, the paintings are again falling into disrepair. With a humid atmosphere and not enough proper attention, these exquisite and valuable works of art, that Lloyd and I were delighted to have been able to see, might not be with us much longer.

Other structures are also ornamented, and there is a museum that has early farming implements, paintings, models, kris (traditional knives) and other articles, including a Barong (the Lion Dance costume).

The Klungkung kingdom probably was most significant of Bali’s nine kingdoms from the late 17th century to 1908. Klungkung was home to Bali’s royal families, and the celebrated Klungkung Palace. Mostly demolished during the Dutch colonial conquest in 1908, this Royal Court persisted during the Dutch occupation. Kerta Gosa was one of three remaining structures of the Semarapura Palace complex, that were not destroyed by the Dutch in winning the war against the Kingdom of Klungkung in the early20th century. In 1908, a final stand against the Dutch began, and there was a puputan (“finishing”).

After the puputan, the survivors of the royal family were banished, and the Palace was largely razed. The historic Kerta Gosa became head of the kingdom of Klungkung in 1929, the royal family was permitted to return, and settled in the Puri (Palace) Agung, where the descendants of the rajas that used to rule Klungkung live today.

Denpasar, 24 miles from Klungkung city, is Bali’s capital, and biggest city. At the busy intersection of Puputan Square(named after the 1908 “fight to the death” of Bali’s rajas against the Dutch militia), is the stately Puputan Klungkung Monument, made from black stone. Dedicated in 1992, the ample statue is a 40-faced Hindu god, blessing all directions.

In the varied, and colorful shops of Klungkung, Lloyd and I admired some modern, but mostly antique Klungkung-style paintings, carving, silverwork and silks, all of which were gorgeous. I even managed to buy two lovely Balinese-style dresses from a street vendor, through my motor-coach window.

Search: The Royal Court of Justice