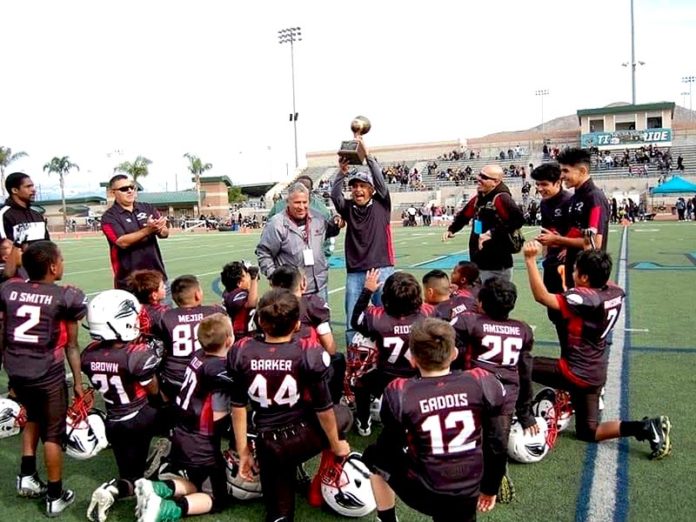 The Hemet Hawks (Micro division 9-10 year olds) represented our valley in the Southern California Junior All-American Conference (SCJAAF) Super Bowl this past Sunday in Hesperia. Coming into the matchup the Hemet Hawks were listed as the underdogs, as they have been for most of the season.  This is based on the fact that the organization is relatively young (three years) in comparison to the other teams in the same league.

They came into the playoffs as the fifth seed which means they were on the road throughout the playoffs. Plenty of parents and fans showed up to help the athletes feel like they had somewhat of a home-field advantage themselves. In their first game of the playoffs they went up against the fourth seed PSCC (Palm Springs/Cathedral City) which was supposed to be a defensive game, considering Hemet and PSCC had two of the best defenses in the league, both allowing under 100 points on the season.

The game turned into somewhat of a shoot-out and Hemet left the game victorious the final score being 21-19. In the next round Hemet played the number one seed in the conference, Upland. The Hawks defense proved to be elite: they held Upland to only six points, which is an amazing feat: Upland is the leading scorer in the league with 233 total points this season, so this was a very impressive showing by the Hawks. They advanced to the final game of the play-offs and took on another opponent who was ranked higher than them: Hesperia.

Hesperia was the two seed, but again, the Hawks defense couldn’t care less: the Hawks held them to just six points in the Super Bowl. The Hawks scored 12 of their own and with that, won the game. On paper the Hawks were considered long-shots, but those athletes couldn’t care less about their ranking or what the paper had to say: they were going to go out and play football. That’s exactly what they did.

LJ Amisone threw a beautiful pass to Marcus Moorer with only nine seconds left in the game. Marcus Moorer really showed next level “ball skills” snatching that catch. it was good for 23 yards, but more importantly a touchdown. Head Coach Raul Roque and staff coached an amazing game and team that day. It will go down in the Hemet Hawks history books.

The Commissioner of the Hemet Hawks (Sergio Camacho) had this to say about his team before the game, “Today’s game will be historic in Hawks history, no matter what the outcome is. In three short years, we have a team in the Super Bowl. It has been a roller coaster of emotions, some sad but most happy. This team has showed us that the cliché of ‘Hard Work Pays Off’ isn’t just a metaphor for life, but actual truth. No matter what obstacles might lie ahead we work hard; no matter what you are doing or how you feel, pick your head up and get to work. Work hard at it! The outcome of hard work might not always come to light in an instant. You have to be patient. To all our teams that didn’t make it to the Super Bowl this year, don’t be discouraged, your hard work will pay off eventually, I promise you that. We will all be there next year working hard with you. I’m proud to be a Hawk and even more proud to call all of you who have joined us in the past years ‘friends’ and most importantly ‘family,’ now bring that trophy home!”

The Inland Empire Sports Connection is proud of the Hawk’s organization and everything they accomplished this season! Congratulations Hawks! Good luck moving forward.

For more information about the Hemet Hawks football organization go to www.HemetHawks.org or follow their social media @ Hemet Hawks Youth Football
Signups for next season are just around the corner so keep an eye out.

Competition is Heating up Midway through the Basketball season

Kyle Headlee - December 27, 2019
In the Boys division, Citrus Hill has found themselves on top with a 6-4 record. Beaumont is right behind them with a 7-5 record. West Valley is in third place, their record 5-8. Behind them is San Jacinto High: they have 3 wins and 6 losses on the season so far. Hemet is sitting with a 3-7 record. Tahquitz is in the back of the division with a 0-11 record.

Contributed - February 27, 2020
Kyler Sargent led the MSJC men's golf team to a tie for 8th place at the Riverside City College Invitational on Monday as he shot a season best 70 at Victoria Country Club.