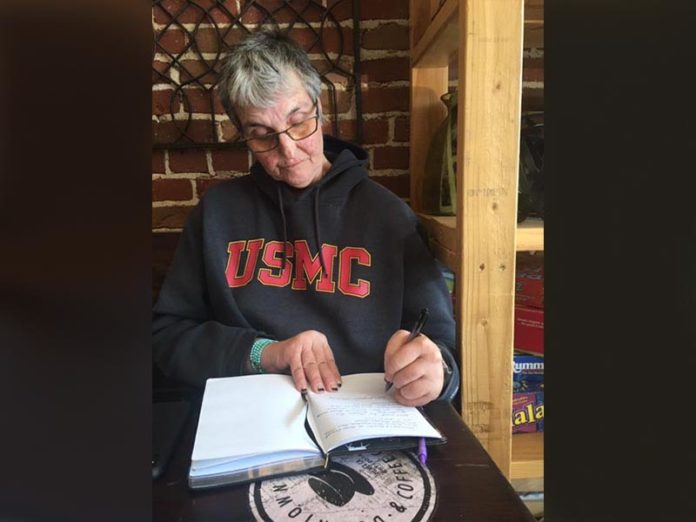 (A life of service)

Sandy Dee has lived a life of service. She not only served our country, but she is now serving those who once serve our country.  She feels she was born to serve.

“I was born to deaf parents, so I’ve always been an advocate for those in need,” said Dee, adding, “The mission of my organization, “A Pawsibility 4 veterans (apawsibility4veterans.org) is “To bring awareness to, and add value to the community and our veteran population in collaboration with other organizations.”

Dee served in Germany during the end of the Cold War in the 1980s. While she served in the army, she also has a soft spot for the Marine…and for all veterans.

While a life special service can bring deep emotional gratification, it can easily become a hard burden for those who care because they want so much to help others. “I had reached a crisis point after about three years, because the program had basically hit a plateau. I prayed for some understanding and some direction as to my purpose,” says the veteran, adding, “People mentioned to me how they noticed my love of photography and networking. Then a fellow veteran told me about a program called, “Veterans making movies,” at LACMA (Los Angeles County Museum of Art).

That quick, a mission was born.

“As a veteran who had struggled with depression and thoughts of suicide… I decided to make a short account of my experience. I became certified as an iPhone film maker and filmed and produced the short film called, “Shadow Cide,” which is on YouTube. It’s a short film about veterans and depression.”

Dee says that the film was cathartic in more ways than she could ever ever imagined. “Suddenly, as I begin filming I felt the flood of anxiety and suicidal thoughts and depression come to rest. It relieved all that anxiety and negativity. In addition to that I tell people that God is so smart, that God spelled backwards is d-o-g. God sent me my service dog London, and he has made an immense difference in my life.”

Dee says that her goal now, is to bring peace, positivity and solace to veterans, and awareness to the community, by furthering the mission of, “A pawsibility 4 veterans.” “It’s more than just giving back, it’s about paying it forward.”

We are pleased to announce that Sandy Dee will be an ongoing, bi-weekly contributor to The Hemet-San Jacinto Chronicle in her column, “A voice for Vets” beginning this week, elsewhere in this edition.  Please welcome Sandy with your positive comments!  She can be reached at either apawsibility4vets.org or the Cloverlane Foundation.

Search: A life of service

Why Walk Around On Dark Streets This Halloween?

Kyle Headlee - October 10, 2019
In this day and age the idea of Halloween is scary and dated. Dressing up your kids and walking around dark streets and up to people's houses to ask for candy is such a freighting idea. You don’t know whose house you are going up to.

This the season to be blessed