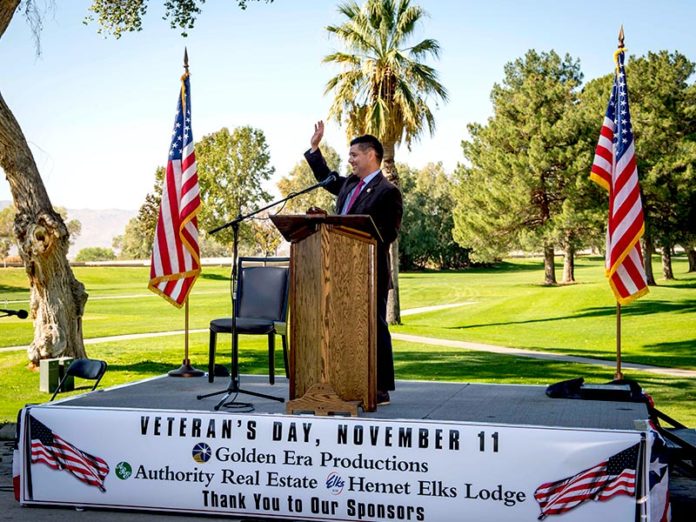 The dawning of Monday, November 11, 2019, in the San Jacinto Valley was filled with sunshine, hope and it was also a time to reflect on times and places that were turbulent and uncertain. Times when families were torn apart as was the country and the world, From Bunker Hill to Pearl Harbor and even unto today when there is so much hatred and division among the nations.

It was the 12th annual Veterans Day Celebration held at the Golden Era Golf Course and certainly one of the most heavily attended.

As soft breezes swept across the golf course in a summertime atmosphere, it might have been the prelude to a carnival or bazaar. But it wasn’t, and if anyone thought that, they were at the wrong location.

The celebration of heroes both living and dead reminded us all that without readiness in peace, there is no assurance in conflict. The nation celebrated the American will to be free, stay free and protect freedom for all.

The keynote speaker for our event was 36th District Congressman Raul Ruiz, who addressed several hundred citizens who turned out to honor all veterans, both living and deceased, who stood tall and firm in our many battles to spread the idea of freedom for all, and especially to protect our own.

` Congressman Ruiz declared, “This is a holy day for veterans, and it is our veterans who have put their country above themselves and have made the United States of America the most remarkable and strongest nation in the world.” He pointed out specifically that, “those who have served have earned our respect,” and that we should treat our veteran s with acts of kindness.”

He was quite forceful in announcing that “Our doors are open to any veteran who needs assistance,” and urged veterans to inquire as to what is their right in services if they haven’t already done so” He also said, “No veteran should be homeless.”

Let’s get real folks. Should anyone ready to give up their life for our country be without a home?

World War II Veteran, Dwayne (Bud) Armand, a Hemet resident, was presented with a Congressional Recognition by the Congressman. There were only a couple of WW II Veterans in attendance because the number who still live are dwindling daily.

Local organizations in the community, i.e., Hemet Elks, Authority Real Estate of Hemet and Golden Era Productions, were recognized as sponsors of the annual tribute. Muriel Dufresne, Community Affairs Director of Golden Era Production, said the event was “Salute to Our Veterans, honored men and women of our nation’s armed services for their bravery, dedication and contribution to freedom in America.”

However, there was more to the day than speeches. Under perfect blue skies, a flyover was performed by a very daredevil pit in what appeared to be a twin wing plane salvaged from World War I that brought gasps from onlookers, flying so low as to “mow the grass without touching the ground” and off again. It was something a child might read about in a comic book, reminding this reporter of days long past when crop dusters performed such breathtaking chances. Those planes, as well as some other relics from previous wars, might be seen at the Props and Jet Museum of Hemet out at Ryan Field on the west end of town.

The California Riverside Pipe Band performed “A Scottish Soldier,” which will bring a lump in the throat or tears to the eyes to anyone who understands the loss from battle and the feelings suffered by survivors. This was followed by The Riverside Sheriff Department Mounted Posse presentation of the colors.

The San Jacinto High School Chamber Choir performed the national anthem, and the award-winning San Jacinto High School R .O. T. C. rifle drill team demonstrated competence of almost disbelief with a flawless drill routine. These youngsters appeared to be combat-ready if anyone had any doubt about preparedness. One wonders if these innocent students will someday be called upon to lay down their lives to protect our freedoms. If that thought doesn’t touch your heart, I fear you have heart problems. Any one of them, nearing adulthood, could be my child or your child. It is very thrilling to look at, but horrible to look beyond at the possibilities.

U. S. Navy Veteran Virgal Woolfolk, a resident of Beaumont, who was part of the military task force to free the American hostages in Iran and later served during the Gulf War, delivered a very simple but meaningful invocation.

“For each and every venter,” he said, “who has served our country through the years, we thank you for your sacrifice. Comfort those who struggle in life after war, Help us to honor and care for those who have given so much for us,” he said.

The ceremonies ended with a five-gun rifle salute by the American Legion Post 53 Honor Detail team and fallowed by the audiences accompanying Golden Era’s own Linda Greilich and the San Jacinto High School Chamber Choir.in a loud and glorious rendition of “America The Beautiful.”

A complimentary Luncheon, served by Authority Real Estate followed and there was free golf for all veterans

I had the honor of front row seats with San Jacinto Mayor Russ Ut, Congressman Ruiz, Muriel Dufresne and my longtime friend Virgal Woolfolk. To say I was moved would be a vast understatement. Veterans from every war from World War II to whatever we call the mess in the Middle East and their families were present. I am one of those veterans. I reflected back to my childhood, long before I ever put on a uniform, and remembered that during the 1930’s kids bought bubble gum that came with Indian and Cowboy cards and War Cards that told stories of heroes and battles. The one thing I never forgot and I don’t think I ever will was a simple statement on the War Cards that said, “To know the Horrors of War is to Want Peace.” Who among us dare not say Amen to that? Just /sayin’.

Contributed - March 11, 2022
Several years ago, a lady came into our church offices seeking financial advice. It seems that she had “fallen in love” with someone in Nigeria (sight unseen) and had been sending that person lots and lots of money - per their request - believing they would soon come to America and engage in . . . wedded bliss. She had lost most of her savings and now that her money was gone, so was he. She was deceived, of course - hoodwinked out of her life savings.