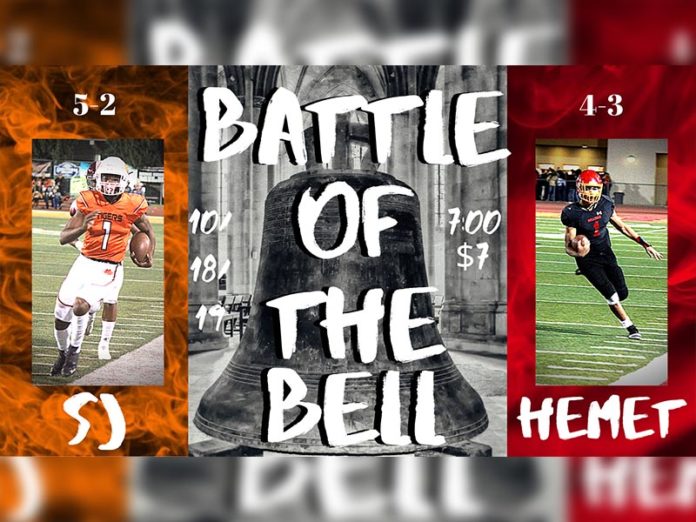 (Battle of the Bell)

Tigers Head to Bulldog Stadium to Take on the Dogs

It’s Rivalry Week in Hemet & San Jacinto. In our game of the week the San Jacinto Tigers are going to travel to Hemet High for the Battle of the Bell this Friday night.

The Battle of the Bell is a long standing tradition dating back to 1929. Throughout its history the game has been canceled and renewed a number of times due to division/league changes. Historically Hemet High has dominated the matchup and retained the bell. This year promises to be an electric matchup as both teams seem virtually even heading into the game. San Jacinto has a better record (5-2) and is ranked higher (117 in state) but both of their losses came from very tough opponents who have decent rankings themselves.

“Inconsistent” is the best way to describe this year’s Hemet squad. At times they look like they are the team to beat in the division and at other times they seem to struggle getting their offense going (currently they have a 4-3 record and are ranked 252 in the state).

Hemet’s defense and special teams have really been the key to the team’s success this season. They’re constantly making huge stops and clutch kicks. Hemet hasn’t quite played the quality opponents San Jacinto has, but they did beat Citrus just two weeks ago, and Citrus hasn’t been beaten by a team in the league since 2010. You have to respect that and know that they have the capability to turn any game into a dog fight.

San Jacinto’s key to the game is that they’re going to have to come out and score fast. Look for Kajiya Hollawayne and Juan Denny to establish the run game early. Kajiya will have his senior receivers Kameron Rocha & Antoine Sullivan down field waiting for the ball as well as the always trusty Damonce Williams who seems to make big catches when the team needs it most. Their Defensive key will be to continually apply pressure with their front four so the rest of the defense can cover their zones successfully, leaving no openings for the pass game.

Hemet’s key to the game will be to score at all costs. It’s going to be a dirty game, but they have to score quickly and then manage their time. Draw plays, sweeps, and Quarterback keepers will be their best friend. Hemet will need to use as much of the play clock as they can and find a way to get first downs on a regular basis if they want to win this game.

In other Mountain Pass League matchups, Beaumont will look to continue their win streak by traveling down to Hemet to play the Tahquitz Titans. Both teams need to win this game to keep their playoff hopes alive and stay relevant in the league. Citrus Hill is also coming into town to play West Valley. This should be a “gimme” game for Citrus Hill, but West Valley is getting one of their key playmakers, Alfred Jones back from injury. Alfred has a chance to score every time he touches the ball, so getting him back is huge for the Mustangs.

Search: Battle of the Bell