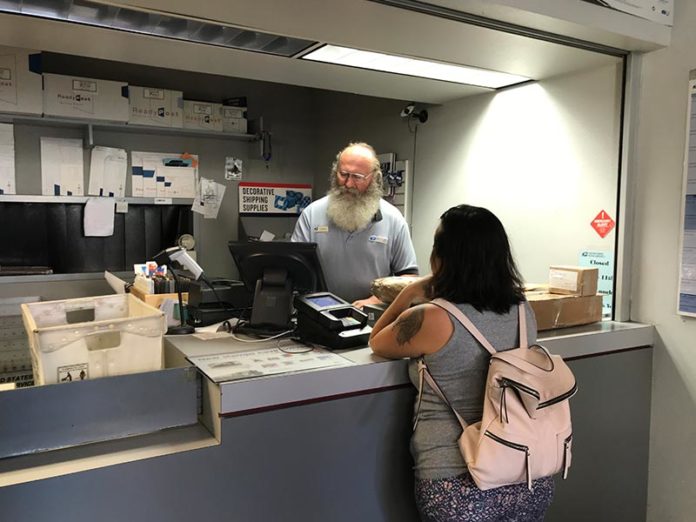 For more than 37 years Conrad Frick has been a familiar face at both the Main Post Office on Acacia Avenue by State Street and the Yale Station by True Value Hardware Store. On Thursday, October 31st he will serve his last patron and box his last letter. Conrad will leave the postal service but not really retire from work. He will be retiring to assist his wife with their RV Storage business on Santa Fe Street just north of the Mt,. San Jacinto Cementer.

“That’s about as close to a graveyard that I intend to be for a long time., he says.
I believe him because Conrad is as hale and hearty as any 19 year old when it comes to the work ethic. During an hour long interview as we sat gazing out the window of a secluded house on the far east end of Acacia Avenue, a place once occupied by his deceased parents…we talked about his life while late afternoon birds chirped in the greenery outside. I turned on the recorder as this gentle giant of a man related a story that should impress any young American as a “firstborn” on American soil of immigrants newly arrived from Germany.

‘”I was born in Hemet Hospital on Monday April 11, 1955, 2 and one half hours after April Sunday. I was the first of two born in America out of 7 children. My parents were immigrants from Germany. Dad was a baker at the resort in Murrieta Hot Springs.”
Conrad attended a small school in French Valley and later went to School in Winchester. He was in the first graduating class of the then new High School located at Stanford and Stetson in Hemet.

“‘I grew up in a family rather poor in finances but rich in dignity and integrity. My father died in 1998 and my mother in 2007. They were wonderful people. As a youngster I didn’t appreciate how they struggled to keep the family fed and housed but as I grew older I learned to appreciate just how really remarkable they were.”
Conrad did not have it easy himself. At the age of 12 he began working on his uncle’s farm in French Valley. “I spent 7 summers doing a man’s work. I was on a pull-type harvester, the header-tender. That first summer I made $140 and it was like I’d broke the mint. It was heavy work. During Christmas vacations I generally learned how to do the work of a grown farm hand.

“I graduated high school in 1973 during the late years of Richard Nixon as president when we suffered price rises and gas rationing. It was tough times. My parents really struggled to make a living: seemed like every day a new price tag went on the grocery shelves. New stickers on the shelves with prices always higher, not lower.  I realized we were poor. I made up my mind that wasn’t going to happen to me.”
In 1976 he moved to Germany to work as a welder. He had family there and as he says, they welcomed him like royalty. “I was an American citizen and that really meant something!”

“I worked in a machine shop for 18 months. Although I was never what you call a ‘papered’ machinist I could weld and do other machine shop work along with those who were. While I was in Germany, I enlisted in the United States Army and was sent back to Fort Knox, Kentucky to take my basic training. I served my four year hitch and then it took me five years to finally become employed at the Hemet Post Office. I remember my first pay check. It was for one week and the amount was $503. For the first time I sported four new tires on the truck I was driving at the time. My next pay check was a regular two weeks pay and every two weeks thereafter. It was like riding the gravy train for me. One of the first things I did was make sure my parents rent was cut in half. I did everything I could to help them, remembering how hard they struggled to feed, house and clothe me.”
He began work in the back room of the post office and worked there and eventually was trained to work at the front desk.

“I worked the front counter at Acacia for 20 years,. I remember the lines being out the door and I’d often be the only one servicing them. It seemed that my fellow workers were on breaks that took as long as lunch breaks.. But my job was to do my job, not theirs.”
He moved down to the Yale Sub-station in November 2005.
“I worked with some very wonderful people over the years, only one that I did not get along with very well. I believe he may have had some mental problems,” jConrad laughs, adding, “My favorite customers were the little old ladies. They have been so wonderful to me. There aren’t as many of them around anymore,. I’ve seen a tremendous exodus in retirements, deaths or moving away,”
How many postmasters has he endured??
“Oh, my god. Innumerable, More than thirty I would guess. They don’t last long here in Hemet. Our postal system here has never been accused of being well-run. One of them, I won’t mention his last name but I believe they called him Mike, absolutely blew the chance we had to take over the old WalMart building across from the Hemet Valley Mall. The deal was set to go when, at the last minute he dropped the ball and we lost it. There may have been some political involvement I don’t know, but it had plenty of access for parking trucks, employees vehicles and customer parking.”

Does he feel sad about moving on?
“Not really. It is not like I’m going to a retirement home or anything like that. I’m active with my wife in her work and I have charities and community events that I am involved in. No, I’m going to do just fine and enjoy life, not just retirement.”
Conrad is a self-made individual who had the opportunity to live the American dream and hopped aboard the dream train that it would well behoove some of those living on the streets to take advantage of. Just sayin.
rustystraiat@gmail.com

Contributed - April 25, 2022
As part of the Department of Veterans Affairs’ efforts to end Veteran homelessness, Secretary Denis McDonough released Master Plan 2022, April 22, detailing the updated vision for a stable and supportive community for homeless and other at-risk Veterans and their families at the VA Greater Los Angeles Healthcare System.