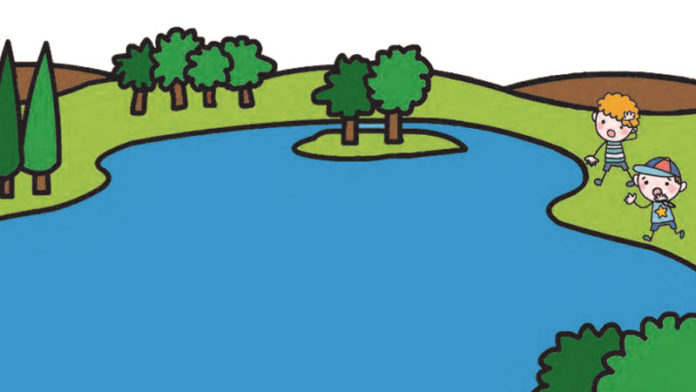 The day was bright, and the sun high. We were in great spirits, anxious to head over the river to downtown Charleston.

Bill said, “I think I saw Sonny Lotts going under the bridge.  Wonder what he’s up to?”
“Wasn’t Sonny.  He doesn’t like anything about Elk River.”
“He mightn’t like it, but I know what I saw.”
“Was there anybody with him? He wouldn’t be caught dead around here alone.”
“Nope. By himself.”
“I gotta see this. Sumpin’ must be up.”

Instead of goin’ to town, we hit the riverbank, went under the bridge on the south side, and then north up the river. We never saw Sonny, but soon forgot all about town.  The river always fascinated us.

We trudged along a mile or so until we came upon a couple of men and a young boy fishing in a small cove.
“How’s it going?” I asked. The kid held up a healthy string of bluegill.
“This is all we got so far, but it’s early.”
“Not bad,” I said.  We chitchatted for a while. Bill finally motioned that we were late for the town.

“Gotta get goin’,” I said. “Come on, Bill. We got stuff to do.”
Anxious to get on with our original plans, which were really no plans at all, we started back towards the bridge.
“Did you ever see bigger bluegill?” Bill asked.
“That’s gonna be our fishin’ spot tomorrow.  Must be some big cats in there.”
“Damn right, and bass, too.”

If we caught a carp, we always claimed it was bass.
At the bridge, we came up with the bank on the north side and found a mob. Traffic was at a standstill. Always curious, I went up to a woman leaning over the railing. She wore a flour sack apron with a butterfly print, looking like she’d been interrupted while fixin’ dinner.

“What happened,” I asked, “where’d all these people come from?”
With a mournful expression on her face, she motioned towards the water, and slowly drawled out the words, “Poor little boys.”
“What boys?” “Two boys went down to the river, and now they’re drowned.”
“What boys?” I repeated the question.

“I don’t know. Two boys. That’s one of their mothers down there,” she pointed to the bank where firemen were setting out boats to start draggin’ for bodies and added “waitin’ for them to pull her son’s body out of the river. “Lord help us.”

My stomach turned to jello. There stood my mom being consoled by a short fat lady, I’d never seen before. Did they think the boys were Bill and me? Who else?
I turned toward Bill to see a face frozen in the most god-awful expression I ever saw.
We were in trouble.
“Let’s get out of here,” he whispered.
“I can’t leave Mom standing down there thinkin’ it was us.”

“Yes, you can. Let’s make tracks, or you’re gonna get the beatin’ of your life, and me, too.”
I knew he was right.
“Okay,” I said, not seeing anybody who might know us. “Let’s go.”
It would be years before I told my mother the truth about that day. There were many things I did that weren’t found out by Mom or the juvenile authorities.

I seemed always to be one-step ahead of the switch, or worse, Officers Johnson and Cunningham.  We conspired in a lot of mischievous behavior growing  up in the hills of West Virginia, I loved hiking most of all, but we explored caves, foraged for roots and berries and wild mushrooms, which led to what we called “the big cave scare.”

The Baltimore and Ohio railroad tracks ran along the hillside east of Magazine Hollow. From September to June we hopped trains and got off three miles away, near Lincoln Junior High School.  Morning freights carried coal from the West Virginia mining communities to the Ohio River, where it was loaded onto barges that moved down the Ohio and Mississippi to places we’d never even heard of.

Above the tracks, near the “holler,” a great rock formation jutted out like a face on Mount Rushmore. A narrow opening led to a tunnel, snaking its way through the granite projectile,  exiting into a wooded area.  We all called it a cave.  To the holler boys, it became just another one of those things you had to do. Bill and I went through that tunnel so many times it had become old hat.   Boys grow.  I grew.  The “cave” didn’t grow. I remember one extra cold day towards the end of December. Still, out of school for the Christmas break, we were off to new adventures.

“Wanna try the cave?” Bill asked, more as a suggestion than a question.
“Too cold.”
“Too cold not to. It’ll warm us up.”
“Okay,” I said, but not with any great enthusiasm. “You first.”
Bill crawled into the opening until he was out of sight, then hollered back to me.
“You comin’?”
“Yeah. I’m coming. Hold your horses.”
I wore my sheepskin jacket – plus I’d put on some weight since my last journey through the tunnel.  At first, everything went okay, and I did fine until about half-way through.

That’s where the tunnel right-angled. I got stuck in the bend. Couldn’t back up. Couldn’t move forward. I panicked. My heart raced, and I gasped for breath. Salty sweat trickled down my forehead, stinging my eyes. My cousin’s yells were becoming impatient.

“Come on you big sissy. I’m almost to the end.”
Unable to speak, I finally managed a very weak, “I’m stuck.  I can’t move. I think I’m gonna die.”
“What are you talkin’ ’bout? Stop the bull crap.”
I called out louder. “I can’t move, Bill. I ain’t lyin’. I’m really stuck. You better get some help. I can barely breathe.”
“They ain’t Nuthin’ wrong with you. Now you listen to me, Raymond, and do exactly what I tell you.”
“Okay,” I said, but I didn’t feel okay. I could already hear folks crying’ over my casket.
“Poor little boy.”

Thanks to Bill, there would be no one crying over my casket that day. I don’t know how he did it, but he talked me, inch by inch, ’round that turns and out of the cave. I’d outgrown the cave. We seemed barely out of one lousy situation until we plunged into another.

West Virginia is loaded with hillside cliffs, one of which jutted out above Watts Street. My stepfather had given me a Kodak Brownie camera for Christmas, and I suddenly became a great photographer, even built my own darkroom. For months, I carried the camera with me everywhere, taking candid shots of any and everything. Not too long after I got the Brownie, we were foolin’ around on the Watts Street cliff. I snapped pictures of him a few feet from the edge. I had some artistic ideas about how to do it.”Move back,” I said. “I want the  hill behind so it will look you’re hanging in mid-air.” He thought that was a good idea.

“Now you take one of me.  We traded positions. I wore my sheepskin that day.  The drop behind me, perhaps ten or twelve feet, was covered with broken rock and shale. I don’t know if Bill was trying to be funny or simply not paying attention, but he kept sayin’, “Back up a little bit more,” until I went right off the cliff, landing below on my back.

Bill scrambled down and stood over me, laughing like a clown. The sheepskin padding saved my life, but the fall knocked the breath out of me. I couldn’t speak. The harder I tried to say something, the more he laughed. I don’t know how long I lay there until an elderly man parked his car and rushed over to me. He got me into a sitting position and held me until I could breathe again. When I could stand, he said, “You boys ought not to be messing around up there. It’s too dangerous.  One of you could be really hurt.”

Neither of us said anything.   I was so pissed with Bill that I forget to say, “Thank you” before the man got back into his car and went about his business.  All the way home, I refused to speak to Bill. He followed along behind like a whipped puppy. We didn’t do anything together again for almost a month until he showed up at grandma’s one day.

“I’m sorry, Raymond.”
“bout time,” I said.
“Still, you gotta admit you sure looked funny. The only time I ever saw you not able to say anything.”

Like always, we put it in the past, and we were as thick as fleas again. Not long afterward, Grandma moved out of the hollow, and I didn’t see Bill every day like I used to. Only on Sundays. Our families went to church together. One Sunday we sneaked out of church right after Sunday school, skipping the sermon and headed up to Watts Hill above the B&O tracks. I’d taken some country matches from the wall box in the kitchen next to Grandma’s big black wood-burning stove and shoved them into my pocket. We decided it would be fun to set the hill on fire. We could stomp it out as we saw in the picture show on Saturday morning. Bad decision.

At first, we successfully started fires and quickly doused them. Then one got out of hand when a gust of wind swept down the tracks and scattered the flames away from us, up to the hill towards the old Watts Mansion. The sound of sirens interrupted our fascination. From across the tracks, behind some bushes we watched the firemen do their job, drenching the hillside with water, saving the historic mansion from burning.

We did not get off scot-free. A nosey old gossip saw and reported us to the police. A few days later officer Johnson was at Grandma’s door, wanting to talk to me and I spoke back, implicating Bill. I wasn’t about to go down alone.  The cops let us off, but our parents didn’t. Bill got a stick as big as a two by four over his back, and Mom took a strap to me. Grandma forbids the two of us to be alone together.