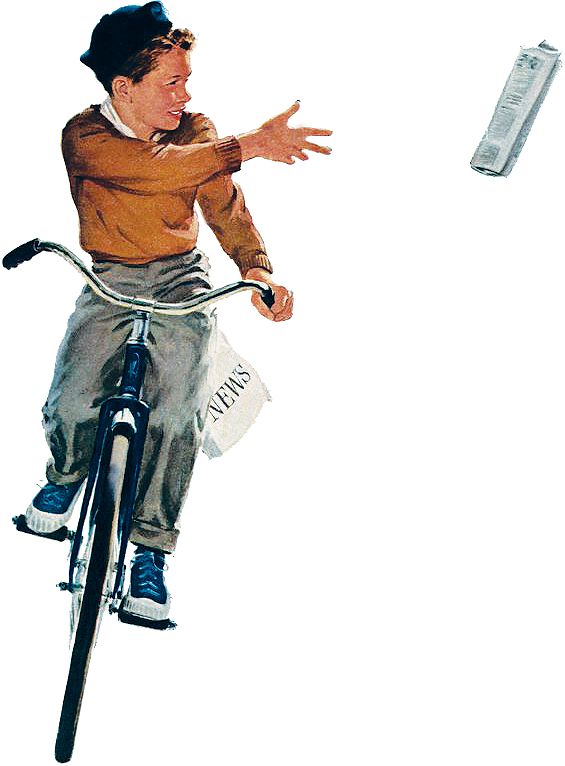 “Read all about it!”

After my father deserted us, my life alternated between city and farm until I started to school in 1932, a year best known for the Great Depression and election of Franklin Delano Roosevelt as the 32nd President of the United States.

According to Grandma Mr. Hoover had all but destroyed the country and Mr. Roosevelt was going to put it back together.  It was also the year I started school and began to take an interest in what was going on outside my own little world. The only close friends I’d had were inside our family, mainly my cousin Bill.

Grandma and Mama talked about how bad off everybody was but that didn’t register much in my young brain.  I was more interested in my crystal radio set and listening to ball games out of KDKA Pittsburgh with Grandpa.  Being poor didn’t mean we were different because as far as I knew the whole world must be poor. I knew how to count before I started school, so I had no problem signing up for The Daily Mail as a street salesman for the afternoon paper.  The Gazette was published early in the morning and Grandma said I was too young to be passing morning papers. Besides, she insisted that I go to school, but I could sell newspapers in the afternoons without interfering with the rest of my day.

“Read all about it,” became a mantra for me and with my tousled blond hair and beaming smile, I became a hit on Capitol Street in front of the U. S. Post Office, a bulky concrete structure several stories up which later became the Charleston Public Library.  It was a sweet spot because the post office was a busy place.

Nobody told me I could take up residence there, I  saw that nobody else was hawking papers on the block and sort of took it over.  During my first year there, I had a couple of scrapes with kids who tried to muscle in on me, but I knew a good thing and never hesitated to defend my territory, even if I ended up with a black eye or bloody nose.  I got respect, not because I was a born fighter, but because I didn’t care if I got bloodied. No bully was going to push me around. Once word got around that I wasn’t afraid to fight back, they left me alone.

One year I read something about a man who fell into a lake up in Canada in February and lost his voice.  It wasn’t long before I was emulating the poor guy. “Pa ah, Mi her?” became my mantra and believe me, it sure helped sell a lot of Daily Mails.

Once a man stopped to buy a paper and asked me, “What happened to you son?  Have you always been tongue-tied?”

And so it went.  My trade grew as did my tale. I managed to weave a sorry picture of a young boy who got dumped out of a rowboat in the middle of winter while on vacation with my family in a lake north of Toronto in Canada.  Who vacations in Canada in the middle of January? You wouldn’t believe how gullible people can be. Not one person ever complained or disbelieved me. Of course, a couple of years later, I suddenly got my voice back and explained it as some miracle from God.

As I grew older, I took on a Gazette paper route, which meant I had to be at the sub-station no later than four in the morning to fold and bag my papers.  I had a bike by then and threw papers from a basket attached to the handle-bars. I still hustled the afternoon papers at the post office.

Tossing newspapers at five in the morning is risky business.  People let their dogs run loose and all too many times my feet peddled so fast I barely outdistanced a bulldog or ferocious  German shepherd.

I finally gave up on newspapers when, in 1937, Charleston’s first drive-in restaurant opened in a vacant field on West Washington Street within walking distance from our house at 812 Bigley Avenue.  A classmate became one of their first employees. One day he stopped by the house to boast of his good luck.

“Raymond, I’ll bet you’d get a job if you talked to the manager.  He’s a neat guy and he’s still hiring.”

“You serve food on a tray to people sitting in their cars.  You’d love it. I caught on right away.”

“How do you serve trays of food to a car?”

“They’re not like regular trays,” added.  “They’re metal and clip on to the window. I mean when the window is wound down these trays clip over the door.  I could show you. It’s easy. And you get tips.”

I knew all about tips because most of mom’s money came from tips.  “How much does it pay?”

“Ten cents an hour, but you’ll make three times that much in tips.  Think about it. Sixteen to twenty dollars a week. You ain’t never made that much money hawkin’ papers, and you don’t have to get up at four in the morning.”

That part appealed to me.  The next day I put in my application and Pete, the manager, hired me without asking much about my experience, which did not exist.  I soon learned why. He liked boys my age for something besides car hopping. He taught me how to hop in bed with him. I wasn’t alone.  All the other boys went through the same ritual. Only one wouldn’t do it. He lasted a week and then got the axe. There were no laws in those days to cover that kind of conduct.  You had the option of agreeing or finding another job.

Contributed - September 13, 2019
Every night when the clock strikes midnight, my neighbors, who live in the mobile home on my right, come out to sit on their porch and smoke marijuana.

CHRISTMAS IN OTHER LANDS

Rusty Strait - December 12, 2019
If you read my stories you already know from last week that Christmas is not the All-American sport. Far from it. In other lands