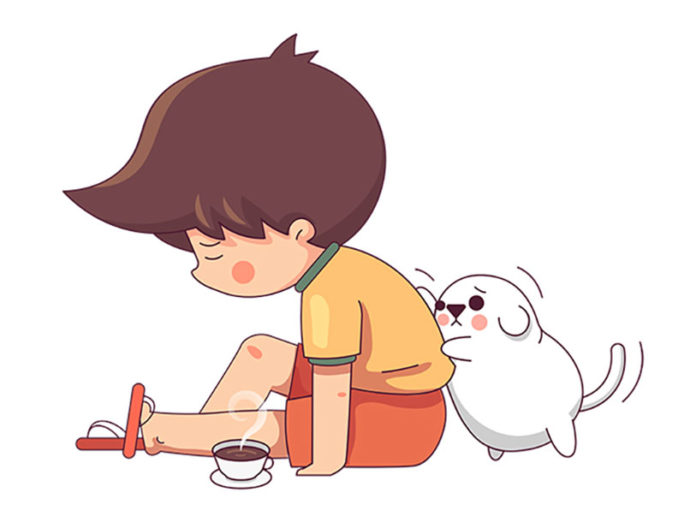 The Baby Brother I Didn’t Have

As an only child, I often felt lonely and left out.  My cousin Bill, with siblings coming every year, did not have that problem.  He was always happy to be away from what he called “too much family.”

I had an older sister and would later find out there were five other sisters, but they were from my father’s other marriages.  Not with my mother and I never met them until I returned from the war in 1946.

Anytime I raised the subject of wanting a younger brother to grandma, she would tell me mom couldn’t have any more kids, and I’d have to make do with my situation.  “What is, is,” she would tell me, and that would be that.

Despite grandma’s admonishments, I would sometimes bring up the subject with my mother.  “Only God knows about those things,” she told me. Don’t you have something better to do with your time than ask questions?”

“I’m already going to be late for school, “ I said.  “Can it wait until I get home?” I was hoping I’d be able to figure out some excuse by 3:15.  That’s when school let out at Lincoln Junior High.

“It can wait,” she said without the slightest inflection in her tone that might give me a clue of what I might be in for.

By lunchtime, I’d conjured up a dozen punishments for the unknown sin I had committed.  All morning I’d been unable to concentrate on the classroom. All I could think of is my awful deed that would not go unpunished.  Just before lunch, my homeroom teacher asked if I was feeling well. I assured her that there was nothing wrong.

“I’ve got some important things on my mind.”

She smiled and said, “You’re a smart young man.  I’m sure you will figure it out.”

The bell rang, and I made a quick escape from any further discussion with my teacher.

Fortunately, my last class of the day was my favorite.  Mrs. MacLaine’s Social Science class, a subject that always left my mind floating into worlds I couldn’t possibly know anything about.  I never left her classroom without dreaming of faraway places that I would probably only know about from textbooks and lectures.

Bill and I walked the B&O tracks toward our homes.  We missed a freight by five minutes. Okay with me. A long walk would help me figure out how to handle my mother.  Usually, he and I yakked like magpies when we were together, but not that day. He seemed to understand that my mood did not lead to conversation.  So we slowly plodded along the graveled rail berms in silence. At Crescent Road and Birch Street, we parted. He would be kicking it alone on to Magazine Holler.  Two blocks away were Bigley Avenue and home for me.

Grandma was humming a hymn as she gently swayed back and forth on the porch swing.

“Your mother’s in the kitchen.  She wants to talk to you.”

“Okay.” That said, I opened the screen door and entered what I felt certain would be my doomsday.

Mom was overly polite.  “Would you like a glass of milk?  I can squeeze some orange juice if you’d like.”  She didn’t sound angry. Score one for me. “Sit down, and I’ll fix you a baloney and cheese sandwich.”

This was not the way my mother spoke when she had some crow to pick with me.

My current step-father, a roofer,  had been working on a job up the river in Montgomery and hadn’t been home in several days, during which time mom closed up the house and came to stay with grandma.  I alternated back and forth. For the moment I was staying at grandmas.

Mom kept busy while I indulged my sandwich and milk in silence.  Then she sat down across the table from me, reached out and took my hands in hers and asked, “What would be the most wonderful gift you can imagine that we would both be blessed with?”

What the hell? I couldn’t possibly have had any thoughts about blessed gifts.  “I dunno, maybe you get a new car. Maybe even a new house. Mom, why are you asking me such a question?”

“Because something is going to happen that will make us both happy.  There will soon be a new addition to the family.”

I still had no idea what she was talking about.  So I said, “Is somebody coming to live with us?”

“Not right away, but yes, a new family member.”

Density took over my thinking.  My dog had recently died. Maybe I was getting a new pet.

“I’m going to have a baby.  You always wanted a baby brother.”

Stunned would have been a mild expression for my reaction. I stammered, “You adoption another kid?”  That’s all I could say.”

To my way of thinking, my mother was old. Older women didn’t have babies. Actually, she was only 38 or 39.   My world went rocking and reeling. Didn’t she want me anymore? Was she finally tired of all the trouble I got into?

“This is as much for you as for us.  You’ll have someone to teach how to behave, and he’ll profit from the mistakes you made growing up.”

My next thoughts made the whole thing sound like some joke.  “How can you know it’s going to be a boy?”

I already thought about that.  One of God’s miracles, as grandma said when something impossible became possible.

“You go on now and do your homework.  We’ll talk more about this another time.”

With that, I was shushed out of the kitchen to a small table in the living room where I dropped my books on the way in.

I didn’t say a word to grandma.  I was too afraid. I remembered a month, or so earlier, my Aunt Annie showed up, bulging like she had a watermelon stuck in her belly, and I said to grandma, “Is Annie pregnant again?”

“Watch your mouth, boy.  You’re too young to know about things like that.”  For Christ’s sake, at that age, I probably knew more about sex than anybody in the family, or at least I thought I did.”

For weeks all I could concentrate on for more than five seconds was the idea of having a baby brother. Someone, I could tell what to do and how.  I was going to be the best big brother on earth. I bragged to my friends and anyone who would listen. You would have thought that I was having the baby.

Early in June right after school let out for the summer, mom seemed not to be feeling good.  That went on for several days. I didn’t understand it. Bill said it was probably morning sickness.  “My mother gets it every time she is expecting to squirt out another one.” He had five or six brothers and sisters. Bot I was a novice.

When my step-father came home from his job, I moved back up the holler.  I wanted to be close to mom. She needed me. I remember so vividly that Sunday morning.  It will always be Black Sunday to me, despite the bright sunshine day that it was.

I woke up to the sweet aroma of bacon frying in an iron skillet and quickly dressed for breakfast.  Instead of mom, Robert was at the stove, basting eggs.

“She’s sleeping in, not feeling so hot.  It’s just you and me pal. Hungry?”

“Sure.”  I was always hungry in the morning.

I thought little else about it until sometime before noon.  Mom never slept that late, so I sneaked into the bedroom to see if she was awake yet.

The bedside light was on, and mom was just layin’ there in the bed, awake, but looking like death warmed over.

“You all right mom?”

“Sit down here.  I have something to tell you.”  She patted a spot on the bed. I did as asked, wondering what was going on.  Did she and Robert have an argument? I could tell she’d been crying. Her eyes were red and watery looking.

“About the brother, I promised you.”

“I hate to disappoint you.  Robert and I are also disappointed.  Sometimes these things happen, and there’s nothing anybody can do about it.”

“What are you talking about?”

“There will be no baby brother this time.”  She started crying again.

“What do you mean?  Is it going to be a girl?”  One day there’s a brother coming, the next day zip.

There was what looked like a porcelain baby potty with a lid on it by the bed. I stared at it but didn’t move.

“Go on.  You need to see what happened.”

I gently slipped off the side of her bed and lifted the lid.  What I saw made me want to vomit. In the bowl was a lot of blood and tissue mixed.

“What’s that?”  It looked like something grandpa might throw up after a weekend of drinking with his buddies at the river.”

“That’s the brother I promised.  I had a miscarriage during the night.  I’m so sorry.”

It took a few minutes for it to sink in.  My baby brother was nothing but a rotten looking mess in a slop jar?  I must have let out the most god-awful scream, and I didn’t remember anything after that until I came to on the couch with grandma at the house and a cold washcloth on my forehead.  Robert, not knowing what to do, left me there with mom and went to get grandma.

I have lived with the memory of the baby brother I didn’t get for all of my life.  That scene is etched in my brain.

For weeks I blamed my mother.  A lesson like that sometimes hardens a person to live.  That’s when I learned that you couldn’t be sure of anything until it happens.